The last 44 years of Dr CP Mathew’s life after retirement is a fascinating story of scientific curiosity, a readiness to think out of the box, courage to take the path less travelled despite opposition and ridicule, humble perseverance, and in-depth study that resulted in developing integrative oncology protocols that helped give a fresh lease of life to terminally ill cancer patients whom everyone had given up on. 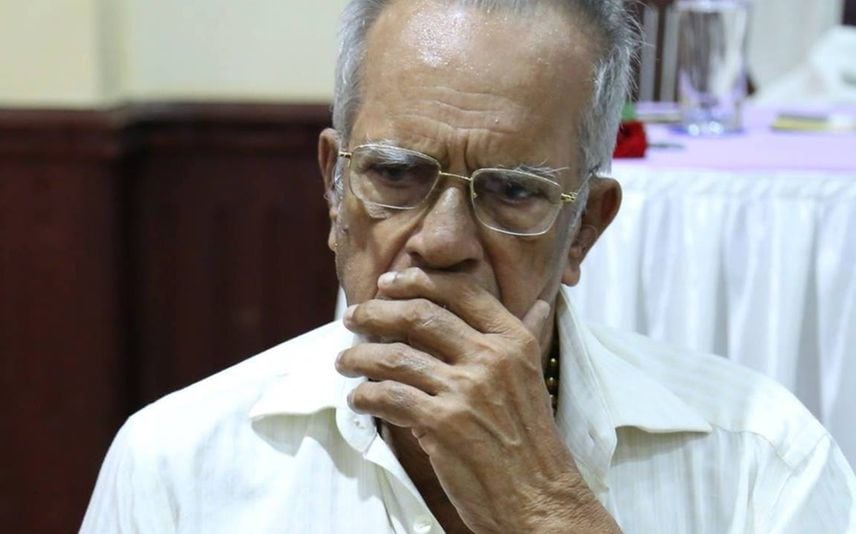 October 19th marks the first Anniversary of one of the trailblazing Oncologist Physicians of our times- Prof. Dr CP Mathew, who died in harness, at the ripe age of 92. One of India’s pioneering Oncologists, he was the one who started the Oncology program in the state of Kerala and was a Professor of Oncology in all the three Medical Colleges of the state. But what makes him a global figure is the fact that he was possibly the world’s first physician/oncologist who seriously practiced Integrative Medicine, and very successfully at that. Integrative Medicine can be defined as health care that uses all appropriate therapeutic approaches—conventional and non-mainstream—within a framework that focuses on health, the therapeutic relationship, and the whole person. Prof. Dr CP Mathew did just that for over four decades and eminently qualifies to be declared the Father of Integrative Medicine.

For forty four years, ever since he retired from government service until he passed away in 2021, Prof. Dr CP Mathew practiced Integrative Oncology combining the best of Modern Medicine, the Siddha System of Medicine and Ayurveda, to the great benefit of patients. Most of the patients who approached him were end-stage cancer patients who had been sent home by renowned cancer centres, as they had nothing more to offer curatively. At the behest of countless such patients who live on today, thanks to such an Integrative approach, an event to commemorate and celebrate the life of Prof Dr CP Mathew and to urge the medical fraternity to continue his good work, was held at Cheriyan Ashram, Kottayam, where he practiced Integrative Medicine so successfully.

The Siddha Medical Association of India took the lead and a National Seminar on Integrative Oncology was conducted a few days back where Dr Sabu Thomas, Vice Chancellor of the Mahatma Gandhi University of Kerala spoke of the much-needed holistic approach practiced by Dr CP Mathew whom he greatly admired. In fact, MG University is to institute a Chair in Holistic Medicine in memory of Dr CP Mathew. Professor of Radiology, Dr Sudheer, now with the Lakeshore Hospitals, who has had a ring-side experience of the epochal work of Dr CP Mathew shared his views and urged fellow modern medical doctors to study the protocols followed by Dr CP Mathew as so many patients doomed to die, had lived on to tell their tale. Hearing the testimonials from end-stage cancer patients who had not just survived but literally thrived with Integrative Medicine was an eye-opener for many of the 150-odd people who attended; the proof of the pudding is after all, in the eating. Minister, AYUSH, Satbananda Sonowal, in his message urged Oncologists from all streams, modern as well as traditional, to study and research the legacy of 4000 odd detailed case studies left behind by Dr CP Mathew.

The last 44 years of Dr CP Mathew’s life after retirement is a fascinating story of scientific curiosity, a readiness to think out of the box, courage to take the path less travelled despite opposition and ridicule, humble perseverance, and in-depth study that resulted in developing integrative oncology protocols that helped give a fresh lease of life to terminally ill cancer patients whom everyone had given up on.

How did it all happen? It could make an Oscar-winning film! When he was the Head of Oncology at the Kottayam Medical College, he heard that a terminally ill patient, whom he had discharged so that he could spend his last days at home and have a peaceful end, was not only alive but was doing well months later! Dr CP Mathew instead of brushing it aside as ‘impossible’, as modern medical doctors are wont to, found out the patient's address and went over to see him. He was stunned to find the patient whom he had sent home to die, was now in the pink of health! He was told that the miraculous turnaround had happened thanks to a ‘Siddha medicine’ dispensed by a wandering ‘Lada Vaidyan’- a wandering quack to mundane, modern medical eyes.

But Dr CP Mathew was different. He was curious to learn the truth; and decided to somehow trace the ’Lada Vaidyan, and find him he did – when two months later, near midnight, a phone call came that the Vaidyan was making a home visit to another patient’s home. Dr CP Mathew jumped into his car and drove to the address given. The Vaidyan was rather reserved and tight-lipped and was not ready to come to the Medical College to enable research on Siddha medicine. In fact, he was leaving the very next day for Tamilnadu. Dr CP Mathew, senior Professor of Oncology in the state and Vice Principal of Kottayam Medical College then, humbly requested the Vaidyan to accept him as an understudy. He quickly arranged for leave and soon ‘Chela’ and the ‘Guru’ set out on the Siddha trail.

They went by buses and trains and on foot; often trekking in forest areas collecting herbs. Dr CP Mathew found that the patients ‘treated’ by the Vaidyan, some of whom, he felt, clinically had a history of cancer, were indeed doing well on the Siddha medicine. The Vaidyan was not forthcoming about the constituents of the ‘medicine’ but gave Dr Mathew a sample. Carrying the precious sample, Dr Mathew returned. He then searched and contacted Siddha Physicians in Kerala and Tamilnadu and found out that the sample was indeed a Siddha preparation used to treat cancers. Dr Mathew then began a lifelong serious study of the Siddha system of medicine as well as Ayurveda. In fact so proficient did he become in both systems, that he was honoured with the Lifetime Achievement Award both by the National Institute of Siddha and the Rashtriya Ayurveda Vidya Peeth.

Sadly, in Dr Mathew’s time, the modern medical academia in his own state of Kerala, refused to even look at the protocols followed and the significant results posted by him, with such an integrative approach to oncology; because of their ‘allergy’ to traditional Indian medicine! The reason for that is the colonial hangover. Historically, when modern medical teaching began in India, in 1820, it was Integrative Medicine that was taught, with Ayurveda, Sanskrit, Unani, and Arabic also being taught, besides western medicine. But enter the wily Macaulay, in 1835 and everything changed. His main goal was to create a second-class rung of Indians, who would look up to all things British and despise their own heritage; literally, be brainwashed stooges of the rulers. On the medical education front, therefore, he banned the teaching of ‘native’ systems of medicine and even ‘native’ languages and imprinted the idea that anything Indian was ‘inferior’ ad ‘unscientific’ and ought to be shunned. Macaulay definitely succeeded; even 75 years after independence most of India’s modern medical academia has a colonized mindset!

Dr CP Mathew was a Physician who was far ahead of his time. Today, Integrative Medicine is the ‘In Thing’ in the west; with even an American Boards certified course in Integrative / Integrated Medicine. The world today has realized the value of traditional systems of medicine, and the COVID-19 pandemic has highlighted the benefit of traditional medicines. For example, clinical experience, as well as research, has proven that the Siddha remedy, Kaba Sura Kudineer, could not only prevent but help in the successful treatment of COVID, as it had the ability to prevent/reduce the lethal cytokine storm. The Tamil Nadu government successfully used an Integrative medical approach to contain the pandemic. Similarly, evidence is accumulating that the Ayurvedic and Siddha principles of diet and anti-oxidant-rich herbs prevent mitochondrial damage-mediated cancerous processes. In Ayurveda ‘Agni’ (fire/heat energy) is the term used to describe the mitochondria, which are indeed the energy powerhouses of the cell. Agastyar the great Siddha Physician spoke of Mimosa Pudica millennia ago as effective in treating cancer; today research shows that flavonoids from mimosa pudica are indeed most cytotoxic to breast cancer cell lines. Dr CP Mathew who studied the ancient texts used all this knowledge to the great benefit of his patients.

Two international conferences on the future of medical education (ICFME 2021 and 2022) had whole sections devoted to the need to promote Integrative Medicine. There is no stopping an idea whose time has come. Despite the indifference and opposition from his peers during his lifetime, generation next has an open mind; and the legacy of meticulous patients’ records left by Dr CP Mathew is a treasure trove for any budding oncologist to do a Ph.D. on. Towards the last five years of his life, Dr Mathew developed eyesight problems. So Ms Jasmine, the administrator of the Cherian Ashram Holistic Centre where he treated patients, became his scribe. She would follow him like a shadow, reading out patients’ reports, writing out prescriptions for him, and maintaining meticulous records as instructed by him. She narrates that his protocol was to use Siddha and Ayurveda to complement chemotherapy and radiation. The advantage was, that with such an approach, most patients were able to switch to maintenance therapy on Siddha and Ayurvedic medicines alone; and the side effect profile was very much milder. He also successfully used the dietary discipline, pranayama, yoga, and meditation that traditional systems of medicine employ, besides medicines. Today, leading cancer treatment hubs in the west, such as Sloan Kettering, the Roswell Cancer Centre, and others are following in Dr CP Mathew’s footsteps.

One hopes that the new generation of modern medical oncologists in India will rise to the challenge; for it is their privilege to take forward the priceless legacy of Integrative Oncology left by Prof Dr CP Mathew. What’s more, they can take pride in the fact that it is their Teacher of Teachers, who is being rightfully honoured, as the Father of Integrative Medicine.