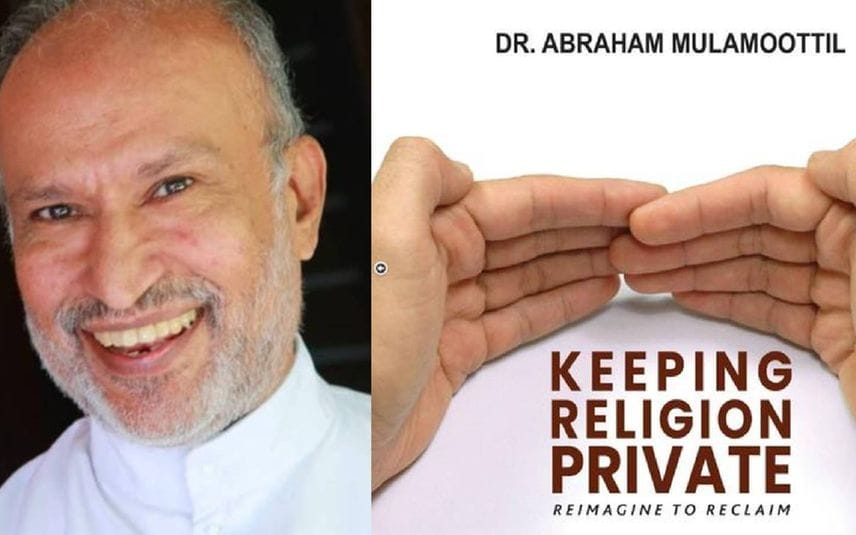 Why do we need god? One of the most interesting reasons is given by Fr. Dr. Abraham Mulamoottil of the Syro Malankara Church. “God should exist lest godmen recreate it inefficiently and faultily,” writes the priest in his fascinating new book, Keeping Religion Private: Reimagining to Reclaim” (Mathrubhumi Books, 2022). When the relevance of a god or religion is once again under scrutiny in the backdrop of the phenomenal growth of frontier technologies like artificial intelligence, cutting-edge experiments exploring age-arresting and immortality possibilities on the one side, and the devastating effects of climate change, global warming and the Covid pandemic on the other, Mulamoottil examines the issue in an objective, engaging and most of all, bold manner when humanity, according to him has entered a post-religious or even “post-Christian” era. It is an amazing work by someone who is not just a priest, thinker and author but an educationist, institution builder, business and technology entrepreneur, startup evangelist, green campaigner, community radio enthusiast and film distributor, all rolled into one!

This is a brutally self-critical account of religion from a contemporary Christian theologian’s perspective and arguably the first of its kind from India that examines the role of god in the 21st century. It critically analyses the foundations of religions and persuades religious leaders and their followers to “reimagine or reinterpret beliefs (in god), faiths (in religions) and creeds (dogmatic assertions for the 21st century”. It reminds the need to permanently reimagine and reinvent religion and god lest they would be ridiculously irrelevant in “the socio-economic, scientific and technological advancements that unravel a universe of new knowledge”. Mulamoottil attempts neither to promote theism nor atheism but to reclaim religious consciousness for organising human social well-being. It also transcends the binary of whether or not god exists.

Spanning a mind-boggling spectrum of contemporary writings and developments in multiple fields like science, technology, and philosophy, Mulamoottil calls for a new, just, inclusive, environmentally sustainable, and democratic form of religion and practices. It emphasizes that religion is a matter of subjective experience and be kept private and not misused by the unholy “trinity of politicians, terrorists, and godmen who hijacked and hacked gods and religions.” Interestingly, Mulamoottil has chosen two confirmed non-believers -journalist N. Ram and scientist C.P. Rajendran- to present the book, who laud the Catholic priest’s fresh, modern and revolutionary perspective.

Mulamoottil challenges many concepts held traditionally by religions and their leaders. He endorses what Marx said that man makes religion (and god, too), not vice versa. “Gods and religions have emerged in a context of the physiological need that leads to spirituality; social need to organise and regulate; moral need to control and judge; economic need to cooperate; biological need to survive; and existential need to find answers to the fundamental threat and anxiety of human nature,” he writes. Religion is necessary, for it may take many more years to overcome these limitations of human existence, but it should be reimagined to stay relevant. Not too different from what Marx said of religion as a sigh of the oppressed, heart of the heartless world, soul of the soulless circumstances before he called it the opium of the masses. Yet, according to Mulamoottil, god “should exist lest we create it.”

Mulamoottil reminds us that humans have been gifted with the unique asset of higher consciousness -to be conscious of their own consciousness. Every form of philosophy, arts, science, technology or religion, and even gods are creations of human consciousness during the course of its progressive evolution towards higher dimensions. However, as Yuval Noah Harari said, humans have an unenviable penchant for committing stupidities, as evident from the ugly underbelly of humans’ incredible achievements. Wars, atrocities, terrorism, intolerance, political hubris, religious and racist fundamentalism, bigotry, onslaughts on the environment, avoidable health hazards, capitalist avarice, exploitation, inequality, poverty, and gender discrimination. The Anthropocene horrors cohabit with the continually amazing human powers to survive, as shown in the development of Covid vaccine at record speed which showed. A reimagined and inclusive new religion could function as a moral deterrent or ethical anchor in the deluge of human mistakes.

Every thought, philosophy, or idea tends to get distorted and misused in the course of time by those who claim to be their advocates and practitioners. One often hears calls to rescue Gandhism from Gandhians or Marxism from Marxists, or, recently, Hinduism from the champions of Hindutva. Religion, too, has to be rescued from organised religions or fundamentalists who beget orthodoxy in the name of faith and god, points out Mulamoottil. 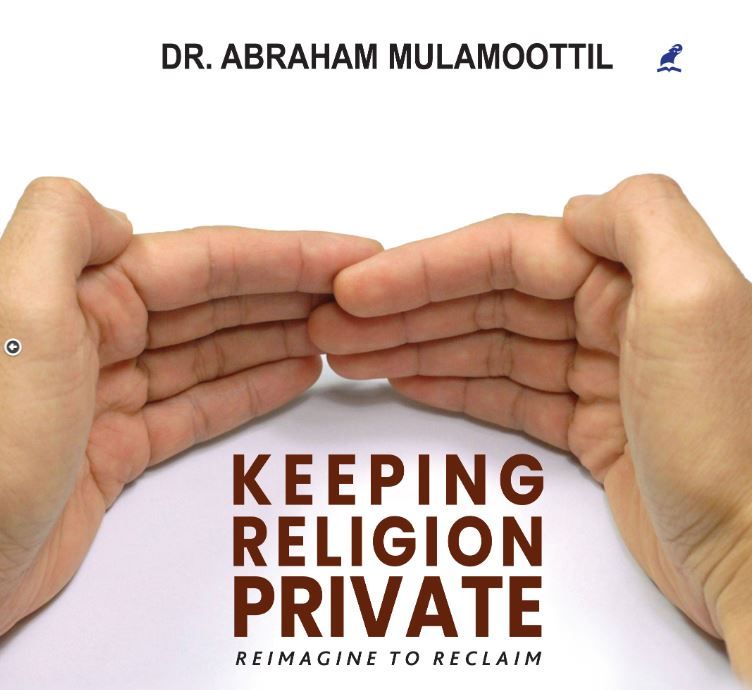 But according to Mulamoottil, a reinvented religion is necessary to rescue the world not just from religionists but also “pseudo or faceless secularists” also. He is not using the term like the Hindutva camp does. But he calls pseudo-secularists those who misuse religion for their narrow political ends instead of adhering to true secularism. Those who remain silent even when religious groups indulge in serious mistakes. “Indian secularism and religions are showing every indication of being under a genuine threat due to the onslaught of politicians, terrorists, and godmen misusing religious teachings and practices,” writes Mulamoottil.

As someone who never rests without translating his ideas into practice, Mulamoottil seeks to launch a Keeping Religion Private Movement for reimagining and reformation of religions. The movement would seek a “paradigm shift to keeping religious beliefs, observances and establishments in the private realm similar to the freedom for keeping property private, freedom of rights, religion, expression, etc.”

Kerala has produced a glittering array of scholars, reformers, and sages who produced many original, imaginative and innovative works on god and religion. They include representatives from all religions and also non-believers or outright atheists. The pantheon starts from the legendary Adi Shankara and traverses through leading lights like Sree Narayana Guru, Chattambi Swamikal, Vagbhatanandan, Nataraja Guru, Nitya Chaitanya Yati, Swami Ranganathananda, Krishna Chaitanya from the Hindu community, Vakkom Maulavi, Sayyid Makti Thangal from Islam or St. Kuriakose Elias Chavara down to Dr. Poulose Mar Gregorios, Dr. MM Thomas, Poulose Mar Poulose, John Wattanky and so on from the Christian fold. There were rationalists like M C Joseph or Communists like K. Damodaran and N. E. Balaram who, too, thought and wrote intensely on religious scriptures. Certainly, Fr. Abraham Mulamoottil would be contemporary Kerala’s representative in this illustrious league. Most importantly, Mulamoottil’s fundamental call to keep religion private assumes all the more gravitas today when religion has encroached into the public sphere and is wreaking unprecedented havoc in many parts of the world, including India.