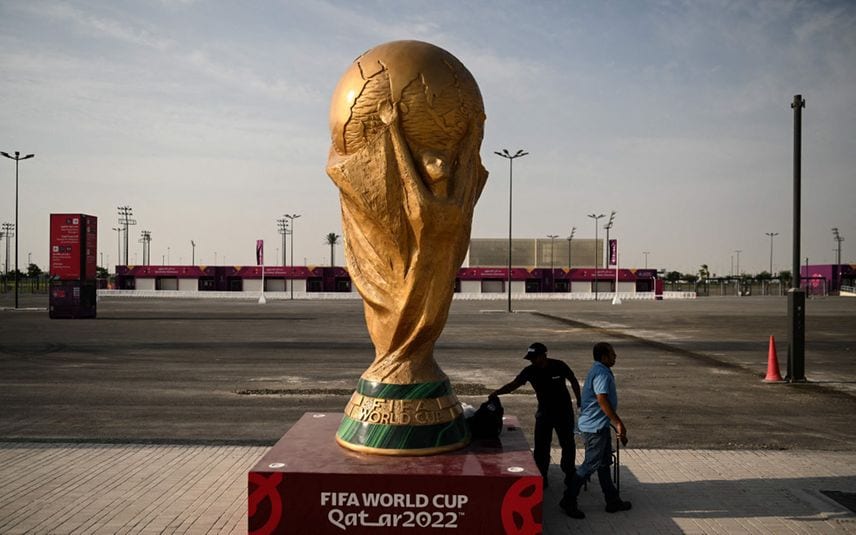 Slugfest between the Governor and the Chief Minister; the Mayor’s letter scandal; crimes most bizarre; sensational allegations; mass agitations; Police actions. And inaction.

These have been bombarding Malayali’s daily lives through hyperactive TV channels for the past few months. But the din may shift a bit to Doha from tomorrow as “the beautiful game” is to bloom for the first time in the desert. The FIFA Men’s Football World Cup 2022 will kick off at Doha’s Al Bayt stadium when the hosts, Qatar, meet Ecuador in the opening match. Budgeted to cost $ 300 billion, the 28-day-long event with 32 participating nations would be the most expensive in World Cup’s 92-year history.

Not many Indian states would have Kerala’s mass following for football. Kerala has been in World Cup mania for the past many weeks. Teenagers in Kondotty and Areekode passionately discussed the strengths and weakness of nations with the authority of a Bacchi or Scaloni. Remote villages have been awash with huge hoardings of icons from different nations, with Brazil and Argentina being favourites. Ronaldo’s Portugal came in close third.

Channels showed a youth in Kozhikode tearing up the Portuguese flag mistaking it for SDPI's ensign. It was fun to imagine the incident also as a reincarnation of the violent historical hostilities between Kozhikode and the Portuguese invaders. Wonder if Ronaldo has ever heard of Kozhikode's immortal Kunhali Marakkar who haunted his predecessors' lives until they captured and hanged him.

The Qatar World Cup is special to Kerala. It would be the closest that Malayalis could ever get to the Cup in the foreseeable future. India - ranked 106th among the more than two hundred footballing nations - is unlikely to host the world’s most-watched sporting event at least for a couple of generations. But Qatar is closer to Kerala than to any other Indian state thanks to its large Malayali expat population (4 lakhs out of 8 lakh Indians). Most of them booked tickets months ago to make it Malayali’s most-watched World Cup ever. Malayalis hold multiple positions in the Qatar Supreme Committee for Delivery and Legacy and they, including women, formed about 2000 of the 20,000 volunteers. So even if we may not play the World Cup in the near future, we will be a major part of it at Doha.

Amidst the excitement and euphoria, most of us have missed the tumor of corruption growing for some time inside FIFA.

In 2015, FBI unearthed FIFA’s seedy underbelly and arrested 14 of its top honchos. Yet, a subsequent internal investigation by FIFA rescued all the alleged perpetrators from imprisonment. Qatar’s human rights record and the poor treatment of migrant workers hired to build the stadiums, too, created headlines. Many teams have resolved to wear protest symbols while playing. Pop star Dua Lipa is to boycott the inaugural ceremony. Newspapers called Qatar, the third-worst host after the junta-ruled Argentina and Fascist Italy. However, Qatar dismissed them all as the West’s racist and Islamophobic prejudices.

FIFA Uncovered, the captivating documentary on the sordid saga of sleaze inside FIFA that culminated in Qatar 2022 has just been released by Netflix to coincide with the tournament. The investigative series calls it “The World Cup of Fraud.” Whistleblowers narrate how Qatar bribed African and Caribbean confederations and struck lucrative deals with Thailand and France to back its bid. (Incidentally, the documentary begins with footage of NBC’s top sports anchor Raj Mathai who has Malayali roots.)

Directed by Daniel Gordon, the documentary smacks of a veiled pro-West bias with racist undertones when it refers to the Caribbean, African and Asian attempts for a seat at the global soccer’s high table. Yet, backed by irrefutable evidence and brilliant craftsmanship, it could hardly be dismissed. It chillingly narrates how the “beautiful game,” a passion for billions of ordinary people across the globe, has been run for decades by a corrupt and greedy cabal who politicked, manipulated, and bribed their way to their offshore banks.

FIFA, born in 1904 with seven European Football Associations as members, was a small and clean organisation until 1974. The turning point came when Europe’s hegemony in FIFA ended with Brazil's Olympic swimmer Joao Havelange’s election as president. A shroud political operation helped Havelange defeat the incumbent President, Sir Stanley Rous pl. Rous was a sympathiser of the apartheid in South Africa and hence despised by the African continent. Havelange promised to ban Pretoria from FIFA and became a darling of the non-white football world, which had enough votes to see him through.

Havelange made FIFA soar from a humble outfit to one dealing in billions, backed by multinationals like Coca-Cola and Adidas. The documentary accuses Sepp Blatter, who was made FIFA’s Secretary General in 1981 by Havelange, of having been the key operator behind all the sleaze. The carpetbagging of all marketing and TV rights of the World Cup from 1976 by Horst Dassler of Adidas was through bribing Havelange, says the documentary. Dassler’s outfit, International Sports and Leisure, became the sole arbiter for every FIFA contract.

Havelange moved from anti-apartheid to pro-fascist games when FIFA allowed Argentina which was under the repressive junta of dictator General Videla to host the 1978 World Cup. Observers call it the “sportswashing” of the dictatorship, akin to the 1936's "Hitler Olympics" in Berlin.

But by then, Havelange and Blatter were on a roll with multinationals queuing up with mouth-watering sponsorships. As long as cash cascaded into FIFA and a share went to most national associations, few cared if FIFA leaders became football billionaires on the sly. Soon Blatter wanted to be the king instead of the kingmaker. He allegedly blackmailed Havelange to give him way to the FIFA President’s chair in 1998. The South American, African, and all-American confederations together helped Blatter. Like his mentor Havelange, Blatter kept batting for the Third World and beat the European Association’s (UEFA) presidential candidate Lennart Johansson hands down. Blatter’s powerful allies soon included the French soccer icon Michel Platini, who was heading the UEFA and Asian Football Federation’s rich and powerful Mohammed Bin Hammam of Qatar. Blatter kept winning the elections to be President five times in a row from 1998 to 2015. The documentary says many African and Caribbean representatives took money from Blatter for votes. Blatter promised to bring the World Cup to Africa if he got elected. He even became close to Nelson Mandela to win African support.

By then, serious allegations and investigations began to surround Blatter and co. Even the FIFA Secretary General, whom Blatter employed, revealed many grave misappropriations. But Blatter, "the Machiavelli of football" won again and kicked the Secretary-General out.

Finally, in 2015, the FBI blew the long whistle and the game was over. The FBI showed red cards to 14 top FIFA officials for bribery and money laundering, and arrested seven from a Zurich hotel. According to the FBI, two generations of officials were involved in the huge scam that went on for 24 years. But, yet, Blatter wasn't among them. And two days after the arrest of his colleagues, Blatter was elected for the fifth time as FIFA President! However, Blatter soon stepped down saying though elected, he didn’t have the support of the football world. Some days later, FIFA Ethics Committee banned Blatter after a Swiss agency announced criminal proceedings against him for mismanagement and misappropriation. Last year, the 86-year-old Swiss survivor received another six-year ban and was fined CHF 1,000,000.

Interestingly, Blatter had favoured and even campaigned for the US as the 2022 World Cup hosts. But he was outmaneuvered in his own game when Qatar got Blatter’s former African and Caribean allies to switch to their side. The administrators' off-ground maneuvers and opportunism certainly outsmarted the footballers on the ground.

FIFA World Cup, Podcast EP03: What do each group offers?