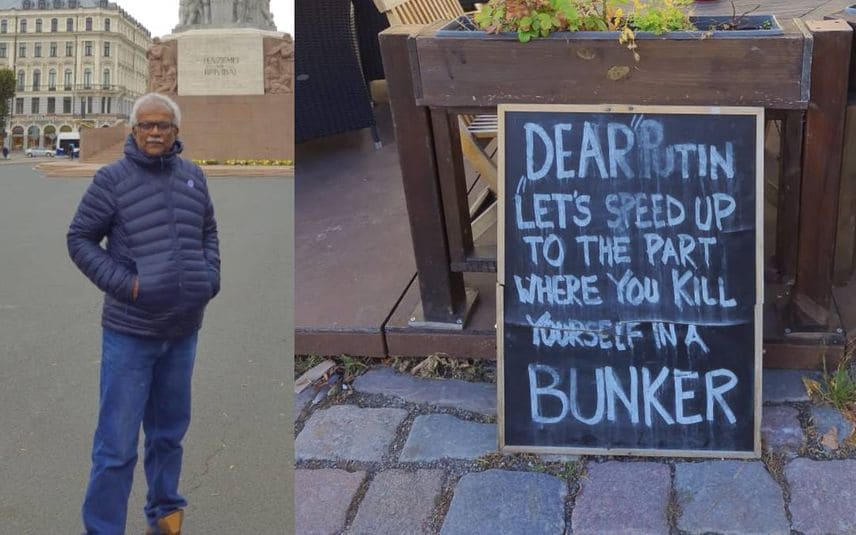 MG Radhakrishnan posing for a photo during the trip; a display board outside an Estonian restaurant at Raekoja

The quaint Indian restaurant -Maharaja Restoran- occupies a vantage point at the picturesque Raekoja Plats- the Old Town Square- with its imposing mediaeval mansions in Tallinn, the seashore capital city of the Baltic republic of Estonia. India may be inching towards the world’s third-largest economy status. Yet, the orientalist tropes- Maharajahs, elephants, snake charmers, etc still seem to be her markers at least for Europe. Otherwise, why are most Indian eateries -big or puny- in Europe still named Maharajah Restaurants? We saw Maharajahs selling butter chicken and biryani at Riga and Helsinki also but sadly not any with masala dosa or idlis. (To those anglophiles who frown at the Indian dummies who stick to desi food even when travelling abroad: Chicken Tikka Masala was voted UK’s most popular dish recently). Like in our Indian Coffee Houses, the waiters at most of the European Maharajah joints are attired in faux royal costumes. A regressive longing for royalty? Maybe. But can't it also be the postcolonial democracy striking back? Isn’t it fun the Maharajahs taking orders for food from us plebeians? Rishi Sunak’s rise to rule Britannia which subjugated us for centuries after the Tatas acquiring the truly British company, the Jaguar Land Rover, and our own M A Yussafali’s buying up the ultimate colonial asset-The East India Company and also the Scotland Yard building - was a proud topic of conversation for all of us -both the jingoists and secularists alike- during the tour.

An Estonian restaurant at Raekoja had put along with their menus outside, a board that said, “Dear Putin, let’s speed up to the part where you kill yourself in a bunker.” A pointer to the end of all dictators in history. Notwithstanding Europe's re-emergence from three years of crippling pandemic and its cruise from the multi-hued autumn to a frosty winter, peace of mind still appears distant. Many fear Putin is the emerging Hitler, and his attack on Ukraine is akin to the Nazi dictator’s invasion of the Rhineland that eventually led to the Second World War. Especially so in the Baltic and Nordic countries, neighbouring the former Communist bloc. Albert Edwards, our young and informed guide in Latvia, a former Soviet Republic on the Baltic coast, says they are relieved that they are already a NATO member and hope are safe from Putin’s ambitions.

There is yet another similarity also. Many members of the ruling classes in Europe, especially Britain and its Prime Minister Neville Chamberlain, had adopted an appeasing policy towards Hitler even after the Nazi’s expansionist ambitions were unfanged. Today, despite ordinary Europeans' fears about Putin, many among the elite appear soft towards the Russian ruler. Why? The growth of the far-right forces with neo-Nazi roots across Europe, who find many in common between themselves and the Russian leader. Author Pankaj Mishra recently observed that these “Putinist” far-right personalities and parties are a potentially more insidious danger within Europe than Putin himself.

A spectre is haunting Europe- the spectre of Communism. Thus began the Communist Manifesto penned by Karl Marx and Frederic Engels, published in 1848. Marx’s prophecy didn’t come true except in one country and that too after seven decades. But today, another spectre, diametrically opposite to what Marx hoped, has already conquered Europe. Rightwing Politics. In countries across the European continent, far-right Neo Nazi parties have either come to power or increased their vote share on an unprecedented scale in recent elections. According to a recent survey, as many as 18 far-right nationalist parties across Europe have secured the highest vote share since the end of the Second World War. The latest is the ascent to power in Italy of the far-right coalition led by Giorgia Meloni, who heads a party that openly adores fascist dictator Mussolini. The far-right is on the rise in Spain too, a country ravaged by fascist General Franco. Clearly, the terrible troika seems to be back- Hitler, Mussolini, and Franco. Perhaps, a right-wing Stalin in Moscow too. Interestingly, the right wing was edged out recently by the Left only in Germany, the original Nazi land, in this February’s Bundestag elections!

But what surprised this writer most during the recent journey through the Nordic and Baltic countries is how the far-right has grown even in Scandinavian countries like Sweden or Finland. For, these countries formed my nearest to the ideal. Their famed cradle-to-grave welfare system offering free education and healthcare to all, progressive taxation, excellent records in human rights, media freedom, transparency, lack of corruption, care for the environment, and gender equality which made them permanent toppers in the Global Happiness Index. Left-of-Centre Social Democrats were in power in these countries for long. Travelling through these beautiful countries, I remembered Chief Minister Oommen Chandy’s promise in 2011 to implement the “Nordic Model” of development in Kerala to compete with the Left’s claims over the “Kerala Model.”

But this September, the Swedish Social Democratic Party lost power after the far-right Swedish Democrats Party won 20% vote share to become the second largest party, for the first time. They were growing popularity for some time, but had remained untouchable for other parties owing to their neo-Nazi character. Not anymore. They are leading a right coalition to power. It is the same story in the other Social Democratic haven, Finland, also where the far-right Finns Party is nearing power.

Why has the last bastion also fallen? The themes that bind the entire European Right is the common playbook for right-wing everywhere, across time and space. Ultra nationalism, xenophobia, anti-immigrant rhetoric, intolerance, constant harping on an imaginary golden past when they were untouched and unharmed by outsiders, and cooking up a collective and grandiose dream to make their country stronger. (America First, Keep Sweden Swedish, Mera Bharat Mahan). The hardcore Swedish right-wing group is even called BSS (Bevara Sverige Svenskt) to ring a familiar bell.

These once broad-minded societies used to welcome and offer asylum to immigrants and refugees from trouble-torn or poor countries for a long time. But many recent developments here have provided fertile ground for the right wing to stoke popular anxieties. Continuing economic recession, pandemic, inflation caused by the Ukraine war, rise in terrorism elsewhere, increased immigration from Syria, rising crimes, etc. The far-right parties could send out xenophobic dog whistles that their enduring prosperity, peace, and the welfare state were under threat on account of the “other.”

However, there is one difference in the Scandinavian countries. In India, the political ascent of the BJP followed the dismantling of the “Silly Socialist” system by Social Democratic parties like the Congress in the 1990s. But none of the far-right parties even now suggest any change to their welfare system. “In fact, they claim that only they can protect the welfare system. Their campaign is that immigration would lead to its collapse,” said Anup Jinadevan, a dental surgeon from Thodupuzha and son of the late CPI(M) leader M. Jinadevan, who has been practising in Helsinki for two decades. Even the right wing could not touch their entrenched welfare system because most Nordic populations have genuinely benefitted from them for generations. Every citizen pays taxes as per their income and benefits from public facilities like high-quality free education (yes, the one Kerala government swears to learn from), health care, and pension. Even the billionaires who pay the world’s highest taxes are assured of a commensurate pension. But in India, the system could be quickly buried perhaps because Socialism was more rhetoric than real. Obviously the masses couldn’t care less as they lived outside of it anyway.

The bonuses of my trip came from Stockholm and Riga. We could see the celebrated Royal Dramatic Theatre on Stockholm waterfront, where the maestro Ingmar Bergman staged the plays of Strindberg and Ibsen. But sadly, we had little time to visit the other Bergman landmarks like the Archipelago, a constant motif in his films. In Riga, Latvia, I was surprised to see the imposing Art Nuevo mansions created by Mikhail Eisenstein, the anti-Communist father of Sergei Eisenstein, the Red Army comrade who became the master of Soviet cinema. Wiki reminded me that Sergei was born in Riga which was a part of the Russian empire and lived there until his mother Julia divorced Mikhail and migrated to Moscow in the year of the Russian Revolution. Mikhail, an opponent of the revolution, migrated to Germany after the Bolshevik ascent. Our guide Edwards said the architect’s name was Eisensteins because every Latvian male surname had an S at the end. Even more interestingly, Edwards, perhaps because of the Latvian apathy towards everything Soviet, didn’t care even to mention the more famous son until I asked.