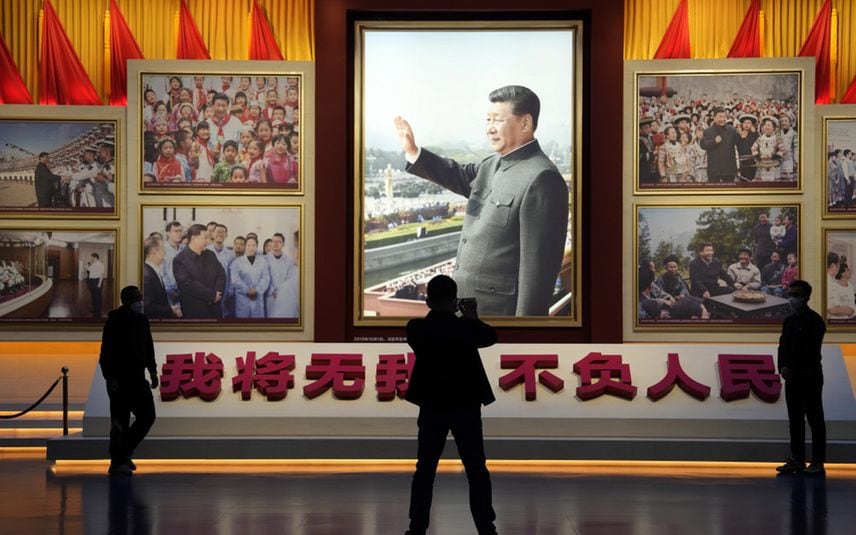 Beijing is one of the cities with tightest security you can come across. Police and military are posted in key areas of the city like Tiananmen Square and Changan Avenue while surveillance cameras monitor people around the clock.

The five yearly Congress of the Chinese Communist Party (CCP), which opens on Sunday, has brought with it the usual extra layer of security in the Chinese capital where Covid restrictions have already curbed movements of people. CCP prides itself in maintaining order and stability even during normal time and imposes a near lockdown in Beijing ahead of all key political meetings.

So it was astounding to see protest banners appearing on a bridge in northwest Beijing on Thursday, just days away from one of the most crucial meetings of the CCP as it is poised to rewrite history by re-electing Xi Jinping for the third consecutive term as the president. The unveiled banner slammed Covid policies, wanted freedom, not lockdowns and more shockingly, called for the ouster of "traitor dictator Xi Jinping".

Police moved in quickly to end the brief protest and grainy footage showed what seems to be a lone person being taken away from the scene. But the images sparked some spirited discussion on the Chinese social media who praised the protester as a “warrior” and raised concerns about his safety. Some even referred to the famous Tank Man image from the 1989 Tiananmen protests. Such chatter was immediately shut down by censors and by Friday they had scrubbed out words like “bridge”, “warrior” and even “Beijing” from chatrooms and posted security guards around several bridges in the capital city.

Perhaps it is a bit sensational to harp on a brief protest by a lone person in the sprawling Chinese capital, but it conveys a sense of despair that has enveloped the society as Beijing continues its relentless perusal of its severe Covid restrictions despite the damage it has caused to the livelihoods and day to day activities of millions.

People need to show a green certificate obtained through scanning a health QR code to gain entry into public transport, restaurants and malls. Even a secondary contact with unknown infected persons could turn your status to red, effectively shutting you out of shops, trains and public places. All you can do then is stay home and undergo daily tests for Covid till the authorities signal that you are free to go out again. Those who test positive for Covid or have made direct contact with an infected person are shipped off to government quarantine facility for isolation.

Such drastic measures have been in place for almost three years since the pandemic broke out in Wuhan and this has brought the economy to its knees. But the CCP has declared that there will not be any change in its policies and has in fact urged the party cadres to strengthen Xi’s hands to complete victory over the virus.

The general resentment has spread far and wide as trade and businesses slow down, helped in no small measure by Xi’s crackdown on online education and gaming sectors while crisis in the real estate sector is dragging down provincial economies. Now there is a raising concern that Xi is taking the country away from its path of economic liberalisation and returning the country to Marxist-Leninist path.

But none of these are going to be reflected during the Congress when some 2,300 delegates representing over 90 million members of the CCP assemble to elect the leadership that will lead the country in the next five years.

Unlike in other countries, the word “elect” does not mean picking the best from several candidates, but more an endorsement of the choices made by the party's Central Committee, which is made up of 300-odd carefully vetted members. The committee also picks the seven-member standing committee of the Politburo led by the general secretary, and they will make all decisions of consequence for the next five years.

Before the advent of Xi, factions linked to national leaders and former presidents jostled for positions in the standing committee while the premier elected from among the members acted as a counterweight to the president. That is now history.

Xi has worked diligently to obliterate various factions in the party and purge key leaders through an anti-corruption campaign that has been running for a decade now. The declared aim of the campaign is to restore the party’s integrity, but many critics see it as a weapon used to get rid of his likely opponents.

The new standing committee is likely to be filled with people who are known as Xi’s close allies, but the exact composition of the committee will be known only after the Congress ends its closed door meeting, which could last as long as a week. During the meeting, the delegates will also endorse a working report from Xi on the achievements of his government so far and his plans for the future.

It is a foregone conclusion that Xi will be retained as the general secretary, head of the military commission and the president. There is no indication of a possible successor emerging and Xi’s rule will probably continue for another decade at least. That is why no leader within the CCP will stand up to challenge Xi’s policies as he becomes the most powerful president that China has ever seen.

It is against this context that the act of the lone protester on the Beijing bridge has to be placed. Those surrounding the top leader have been reduced to yes-men within the party and the government. But out in the open, there are desperate people who are willing to risk their life to send a warning message to Xi.

Police to search premise of Elanthoor house again for a probable third ...