The fear of losing these rights under communist rule and how a capitalist system that transformed Hong Kong from a cluster of barren hills to a premier financial centre would survive added to the worries. 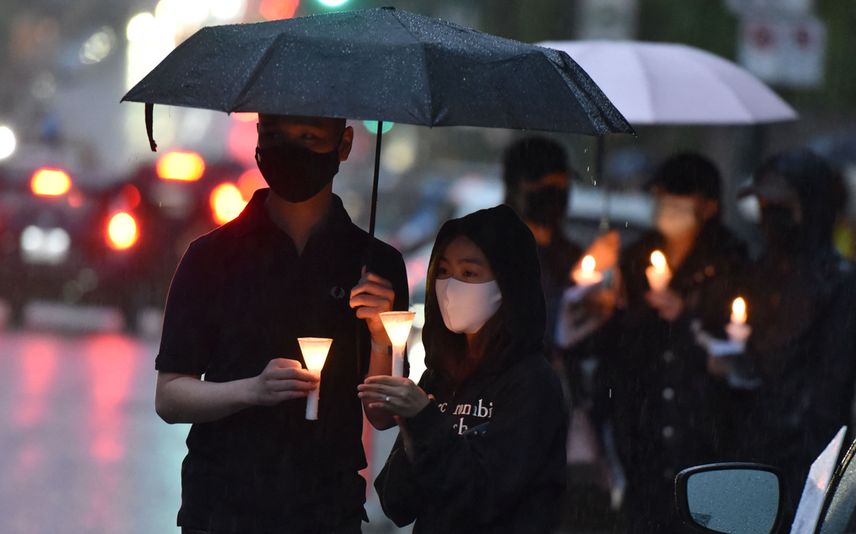 People attend a candlelight vigil commemorating the anniversary of the 1989 Tiananmen square massacre in Beijing, standing outside of the Chinese consulate in Vancouver | Photo: AFP

If there is one thing that could be defined as quintessential Hong Kong, it would be the June 4 candlelight vigil that used to be held annually in the city to remember the victims of the 1989 Tiananmen massacre.

Tens of thousands of people used to arrive at the Victoria Park located next to the popular shopping area in Causeway Bay on that day to commemorate those who died when the Chinese army used machine guns and tanks to clear the student protesters in the Chinese capital.

For many Hongkongers, the annual candlelight vigil was as sacred as a pilgrimage. Thousands, some with entire families including grandparents and tiny tots, would arrive in the evening, sit down in an orderly manner with lit candles in hand and listen to speeches for the next two-three hours.

When the event is over, some would stay back to clean up, in true Hong Kong style, any garbage left behind by the crowd, even the tiny spots of the wax from the candle that had fallen on the synthetic football pitches, to leave the place clean and ready for use the next day.

The 1989 bloody crackdown in Beijing has a special place in the collective memory of the Hong Kong society as the event took place as Britain and China were holding talks to prepare for the handover of the city back to Beijing after a century of colonial rule that allowed basic freedoms and human rights.

The fear of losing these rights under communist rule and how a capitalist system that transformed Hong Kong from a cluster of barren hills to a premier financial centre would survive added to the worries.

London sought to assure the people of safeguards to protect their core values even after Beijing took control of the city.

The outrage and shock it evoked brought thousands to the streets of Hong Kong on the day after the massacre in protest. No group had called them out. People from all sections of society came out on their own to express their rage. From prominent businessmen like Li Ka-shing, one of the richest businessmen in Asia, to CY Leung, who later became a Beijing ally and a senior official in the Chinese Communist Party (CCP) to celebrities like movie star Jackie Chan, who now sings praises about CCP, joined the protest against the crackdown that has left a still undetermined number dead.

In his book, Hong Kong: The Turbulent Times, long-time Hong Kong-based journalist P. Viswa Nathan recounts how the renowned Indian journalist Nikhil Chakravartty, who was in the city after a China visit, was overwhelmed with emotion after seeing the spontaneous outburst of the Hong Kong people. Chakravartty, a prominent left-leaning journalist, was so moved by the scenes that he walked the entire route of the rally along with the protesters, writes Nathan.

From 1990 onwards, a candlelight vigil was held on every June 4 to remember and honour the victims of the bloody crackdown. The practice continued even after Beijing took control of the city. Tens of thousands used to turn up, making the annual event the largest gathering in Hong Kong.

Across the border, in mainland China, all records of the protest have been wiped clean. Later, it was replaced with an official version that characterised the struggle as an attempt fuelled by foreign forces to overthrow the state.

As years went on, the Hong Kong vigil also went through some changes. But the fact that tens of thousands could still gather at the Victoria Park to mark the day despite the CCP controlling the fate of the city was a matter of pride for the Hong Kong people, who saw it as an essential character of the city. Some might have also seen it as a litmus test for their freedoms.

The vigil continued to recall the events and every June 4 night the organisers would call for the vindication of the student leaders.

Sometimes student leaders who escaped to other countries would come to Hong Kong to take part in this memorial.

Mothers of the students who were killed, or simply disappeared, often appeared via television links to address the crowd. In her book, People’s Republic of Amnesia – Tiananmen Revisited, the award-winning journalist Louisa Lim gives a revealing account of these mothers’ agony.

Some people visiting the city from the mainland also used to join the event and expressed shock when they learned about the true nature of the events at Tiananmen. Many expatriates who called the city home also joined the local Chinese in marking the event, and for one night, it was like the city united in its soul, overcoming the divisions based on age, wealth, or profession.

Hong Kong has always been a vital conduit for China’s business with the world. As the Chinese economy began to boom Hong Kong became ever more vital to China. It has led China to ease some controls, but Hong Kong residents who travelled to the mainland for business would still feel a sigh of relief when they stepped back into the city and reconnected with a system that is efficient and accountable.

It signified the deep-rooted desire for civic freedoms and the governance based on common law rule – unlike in mainland China where courts are under the CCP’s control.

So, in 2019, when the Hong Kong chief executive, Carrie Lam, tried to amend the extradition law that would have potentially allowed an arrested person to be taken to the mainland and tried under the Chinese court system, people took to the streets in huge numbers.

Soon it led to continuous street protests and battles with the police, prompting Beijing to introduce a draconian National Security Law, which in effect rendered the Hong Kong judiciary ineffective.

The rebellious air that enveloped the city meant the 2019 vigil attracted a record crowd. But the following year, the outbreak of Covid-19 granted the government a handy tool in the form of social distancing regulations to avoid a repeat. It denied permission for the vigil for the first time – on health grounds.

Still, thousands defied the ban and held a candlelight vigil after dismantling barriers put around the park to prevent entering Victoria Park.

In 2021, police took much stricter steps and prevented large-scale gatherings in the area. The threat of a long jail sentence made many people drift to churches where special Masses were held to mark the day.

That all has come to an end now. Earlier this year the organisation, which used to mobilise the vigil, disbanded citing the National Security Law that could send people to prison even before the charges are filed and held without bail.

Most of the office-bearers of the organisation have been locked up, along with dozens of other activists, just like what Indian Prime Minister Indira Gandhi did during her infamous Emergency in 1975.

The chilling effect of the new Hong Kong law saw even the Catholic diocese cancelling June 4 Masses this year. Social media were flooded with pictures of the empty Victoria Park which was closed, conveniently perhaps, for repairs a few days before.

Police in large numbers patrolled the nearby shopping district and stopped and searched anyone they thought was up to something, including a man who was just walking in the area with a flower sticking out of his backpack.

In the end, there was hardly any protest of note. Beijing and its handpicked government in Hong Kong can pat their backs in preventing any mass gathering in the area this time. It looks like the candlelight that symbolised Hong Kong has been snuffed out for good. The city is now more like any other place in mainland China.

During the 2019 protests, the leaderless movement used a Bruce Lee quote “Be like water” as their guiding principle when it comes to choosing protest areas.

In the past two years, thousands of residents have migrated to countries like Britain and Canada, where small communities of Hongkongers have been taking root. They now hold candlelight vigils in these countries and also in Taiwan to mark the day.

“Wherever I am is Hong Kong,” a youth who migrated to Britain told The New York Times.

Recent events indicate that the Hong Kong spirit may have evaporated from the city. Whether it has been destroyed completely is a moot point. Maybe it has just flowed to different parts of the world, just like displaced water.

The outcome of the weeks-long Covid-19 lockdown ...