Invasion is Invasion; we should tell our friend Russia 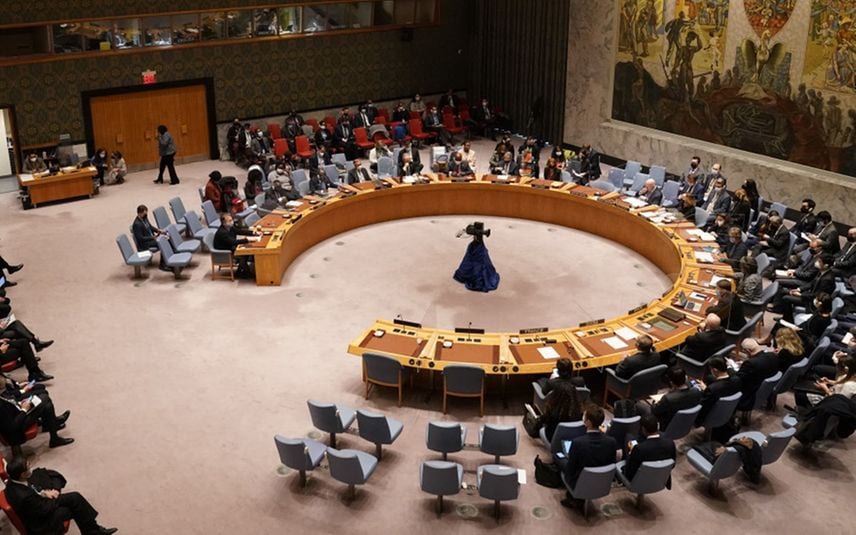 India's decision to abstain in the United Nations Security Council vote on Friday night, on a resolution that would have deplored Moscow's invasion of Ukraine, did not really come as a surprise.

India's earlier statement on Tuesday, when the Council held an emergency meeting on the unfolding crisis, that the escalation of tensions along the border between Ukraine and the Russian Federation was a 'matter of deep concern', and its steadfast refusal to even name Russia as a wrong-doer, had made it clear that we were going to put our 'friendship' with Russia ahead of our principles. But if 'friends' can't speak honestly to each other, what is the friendship worth?

At a news conference on Thursday, US President Joe Biden had sharpened the horns of India's dilemma by stating that 'any nation that countenances Russia's naked aggression against Ukraine will be stained by association,' while expressing the hope that India would be in sync with the US on Ukraine.

But on Friday, India joined China and the United Arab Emirates in abstaining in the vote on the US-drafted text. The UAE at least supported the draft resolution's emphasis on respecting international law and the UN Charter, which outlaws the threat or use of force to resolve international disputes, while India contented itself with pleading for a 'return' to 'the path of diplomacy'. (Both, of course, reiterated their commitment to the territorial integrity, sovereignty and independence of all UN member states, without saying this required a withdrawal by Russia.) Russia, of course, vetoed the resolution. That was always on the cards: no UN permanent member would permit any Security Council resolution to pass against its own interests.

Yet there is no doubt that the invasion - to call it by its proper name - was premeditated and unprovoked. There was no imminent plan to include Ukraine in NATO, the provocation most commonly cited by apologists for Russia. Nor had Ukraine adopted a threatening posture towards Russia. If anything, the West, having identified China rather than Russia as the principal adversary, had attempted friendship; Presidents Biden and Putin even met cordially in Geneva in June. This escalation has come entirely from Russia.

The language Indian diplomats have used from the start of the crisis have however sought to elide this bare fact and impart a curious even-handedness to the crisis. New Delhi has sought 'de-escalation', as if both countries were belligerents, when one is clearly the aggressor and the other its victim. (India did not even object to Russia's 'recognition' of the 'independence' of the two separatist Ukrainian regions of Donetsk and Luhansk.) MEA statements have 'called for concerted efforts from all sides to return to the path of diplomatic negotiations and dialogue'. The fact that Russia had shown no interest in 'honest and sincere dialogue' did not prevent New Delhi from issuing such bromides. While Russian tanks were rolling across an international border and explosions were going off in various Ukrainian cities, India's Permanent Representative at the UN did not mention Russia by name, nor criticise or deplore, let alone condemn, the invasion and Russia's violation of international law in undertaking it. After our abstention, many regretted that India had placed itself on the 'wrong side of history'.

Ahead of the Security Council debate, Ukraine's Foreign Minister Dmytro Kuleba tweeted that in a call to his Indian counterpart, S. Jaishankar, he had asked 'India to use all influence in its relations with Russia to force it to cease military aggression against Ukraine.' Clearly New Delhi's influence with Moscow did not extend that far. Kuleba also urged India 'to support today's draft resolution on restoring peace in Ukraine.' That did not happen either. It is clear that the Russians will pursue their military action till their strategic objectives - which are still unclear - are achieved.

It is not hard to identify the reasons for India's abstention. We are heavily dependent on Russia militarily, purchasing over 60% of our weaponry and defence equipment from them. While commercial ties are much more modest than with the US, we have enjoyed historically close diplomatic relations since the days of the Soviet Union. The Soviet veto at the United Nations has frequently shielded us on Kashmir and even during the 1971 Bangladesh War of Independence. As Russia has warmed towards China and Pakistan in recent years, we want to cling on to its goodwill.

On the other hand, India has also been 'looking west' in recent years. A strategic partnership with the US and increasingly significant defence ties have emerged, and India has embraced the US-led 'Quad' (with Japan and Australia) as a useful counter to China. Till the Ukraine crisis began to rumble a couple of months ago, the US itself seemed to be more focused on the global threat from China, and the Indo-Pacific had loomed larger in Washington's concerns than Europe. All that has now changed, and it is not to India's advantage.

What are the challenges and risks for India? Sacred principles of international law that India has traditionally upheld - the inviolability of borders, respect for the sovereignty of states, non-resort to force to resolve political issues - have been flagrantly violated. Worse, this violation has been conducted by a 'friend' whom we apparently do not have the courage to speak frankly to. Tomorrow, if China marches across the LAC to 'teach India a lesson' in the same way, we will have no one else to blame if our pleas for the world's support fall on deaf ears.

Meanwhile, the larger implications of the conflict are all bad news for us. The crisis will solidify hostility between Putin's Russia and the West, placing us in a bind on issues where the two sides ask us to choose. The US will take its eyes off the Indo-Pacific to focus anew on Europe. The Quad will in any case be weakened by India's failure to go along with the other three on the emerging geopolitical convergence between China and Russia. (Three members of the Quad have come out in support of Ukraine and joined the US-imposed sanctions on Russia.) India is in a position where its traditional reluctance to choose sides on any major international question could come back to haunt it - when it wants other nations to choose its side.

In Ukraine itself, there are some 2300 students from Kerala and 20,000 Indians overall -- mainly medical students -- needing evacuation. The Indian government says it can organise flights from neighbouring countries. but how are the students to make it to the Rumanian or Polish border in the midst of an ongoing war? Any help from the beleaguered Ukrainian authorities to facilitate this is all the more unlikely after India's UN abstention. India has sought to respond to the Chinese threat on the LAC by shoring up relations with both Russia and America, and hoping it would not be obliged to choose sides between them. That was the 'non-aligned way'. The Ukraine crisis has shown us that is no longer tenable. At the UN, one of India's pieties was that the developments in Ukraine 'had the potential to undermine peace and security in the region.' It is becoming increasingly clear that they have the potential to undermine our own peace and security too.