Through the nerves of Khmer

There are certain habits when we reach new cities. Many thoughts pass through our mind when we walk with half closed eyes in the sun light. The things we have to do, the places we have to see and the tastes we have to try. And so on. But the voice that echoed in my mind were my room mate's obsene words. 'It is already late because of you. Did you understand the problem caused by not setting alarm properly in the phone. Bla bla bla!' If I get the phone I would throw and break it! I w

An adventurous bike journey through Cambodia, passing through distant villages, deserted temples and the hell garden of Polpot. 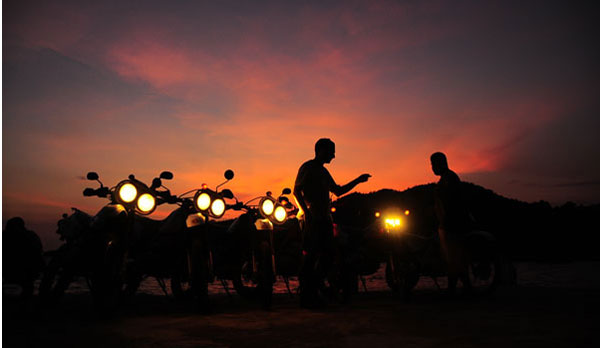 There are certain habits when we reach new cities. Many thoughts pass through our mind when we walk with half closed eyes in the sun light. The things we have to do, the places we have to see and the tastes we have to try. And so on. But the voice that echoed in my mind were my room mate's obsene words. 'It is already late because of you. Did you understand the problem caused by not setting alarm properly in the phone. Bla bla bla!' If I get the phone I would throw and break it! I walked across the room cursing the phone. But the phone broke my plan. The phone has disappeared. Not only the phone, but my i-pod, our G.P.S system, my friend's passport and 2000 Dollars were also gone. Everything gone.

Since this is modern age, the phones might have developed the intelligence to get away on their own. Let it go, but the thought that we are going to travel around the world without the things which were stolen by a Cambodian, nagged me very badly. G.P.R.S. will show him his way. He can roam around hearing the music from the i-pod. Since he could not steal my camera, he will not be able to boast about his adventures before his friends. I cursed him again. We ran around the whole hotel. We made that small three storied lodge upside down by searching on the terrace, questioning the employees who were walking in the corridor and accusing the other guests in the hotel. When we reached the lobby, the Japanese owner of the hotel received us, smiling. Offering some sweets to a friend among us, he told us in a pleasant manner in the voice of a radio jokey. 'Good morning Phnom Penh'. With anger and lost feeling I threw the sweet in to my mouth and stood there desperately. Then I laughed aloud. The beginning of our bike ride through Cambodia was like this. (Thanks to Angelina Juliea's Toom Raiders, picturised in Camodia ).

We vacated the Lucky Ro(gue) hotel and moved to another hotel which was booked earlier. The funny looking 250 cc Baja with sharp eyes on the forhead waiting in the parking area looked at the Toom Raiders. My friends started inspecting the bikes. The atmosphere filled with curiosity and un-used fuel. In all aspects the Baja is totally different from the one you get in India. This reliable bike suitable for any purpose is equipped with a 250 cc engine. It has the looks of the bikes which are used in mud tracks.

The first stop of the tour was at Kep. An isolated sea-shore city on the South side of Cambodia where nobody enters (especially tourists). Highway 3 is the road to Kep. Since the annual road maintenance is going on, we took another way to travel. A journey through the countryside. Travelling through the muddy wet road, with cows running, scattered like hen, children playing with vigor, people walking on the foot-path and many cycles moving on the roadside. These roads show the real faces of Cambodia. The places very different from the fashionable Khmer youths looking like rap stars in the glass building of Phnom Penh. The villages with bamboo houses and swinging seats made of broken fishing nets. The places where they eat anything from insects to any living creature along with rice. Yes, this is the Cambodia we were searching for. 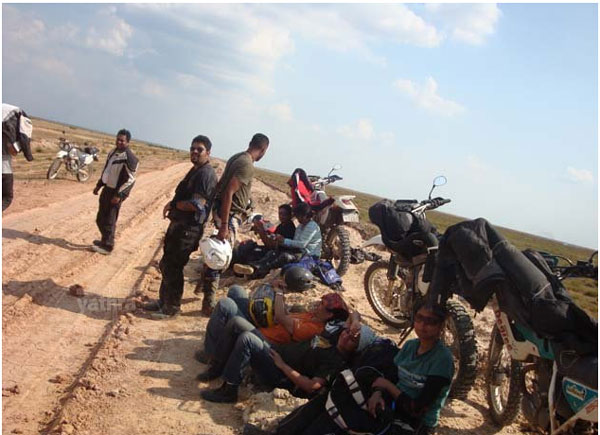 We reached Kep after houres of travelling. We roared into a shore where dilapidated, seemingly haunted French bunglows staring at the sea with their drooping eyes were scattered. During the Colonial age it was a public beach resort. With passage of time, it gradually became inactive, like a nest deserted by a bird. Now a days some eco resorts have sprung up here. When we were saearching eagerly for wilderness, a French motorcross rider dropped in front of us. He guided us through a troublesome forest road, a part of the Kep forest reserve. That road came down in front of a dry dam. From there, we drove our bikes to the entrance of an ancient temple through its steps. Eventhough we tried this adventure to get in to an old French Casino obscured by wild plants that did not work out. By that time I had realized that the word 'no' is the most effective and quick weapon in any part of the world.

After Kep our intention was to roam around the lake 'Tonle Sap' . We wanted to stay one night in the capital before that. That was to see the Genocide museum where Cambodia's dark age is revealed. Passing through the gate which made us uneasy,we entered the dreadful Chong Ek garden. This is the place where the Pol Pot the terrorist's organization named Khmer Rouge massacred 17000 people. A hell garden! Suddenly lightning and thunder started on that warm clear day. It may be due to the humidity in the atmosphere, but I believe that, may be the unearthly powers in this atmosphere got disturbed. As if the unsaved souls are declaring their accursed presence in this garden which has become a cemetery. 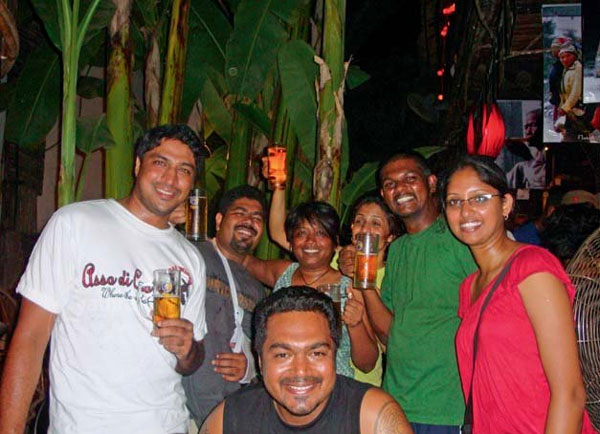 Our plan was to go around the Sap lake enroute Siem Reap and . But we did not know that the lake has become just a stream. The old lake looked like a ground.Diverting from the highway, we travelled for miles in search of some residual water in the lake. But the search was ineffectual. While we were returning there was an accident. Our friend Smruth jumped into a gutter and fell into wet mud, the motor bike over him. We took him in the jeep following us. The total result was a shattered bike, a bruised hand and a wounded ego.

On the way to Siem Reap we got down at Stong. Stong is famous for delicious dishes made of grasshoppers and spiders. The people say that the spider dish is a good aphrodisiac. Expecting a taste of spider in it, I backed out from that adventure. But all of my friends showed courage to try all the varities. 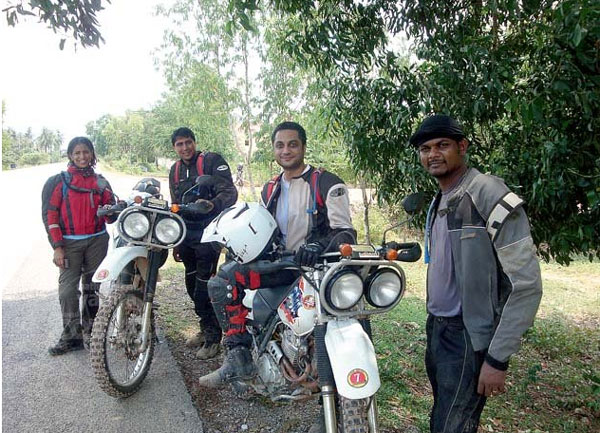 We were near Ankorbhat temple. Since we had visited that place before, we did not give much importance to it. I was eagerly waiting for the ride through the National road 66.

Circling Ankorbhat complex, this road goes to thick forest. Metal road would change to mud road. The ecstasy of the tourists would affect the silence of the forest. In between the forest roads we saw some realms. While riding through the circles of dusty sand, some children waved at us. We sensed that we are passing through the distant interior areas in Cambodia. Our journey was across weak old wooden bridges and stone bridges centuaries old. We were warned that there are deadly disaster waiting on the way. In some places on both sides of the road there are mine fields. 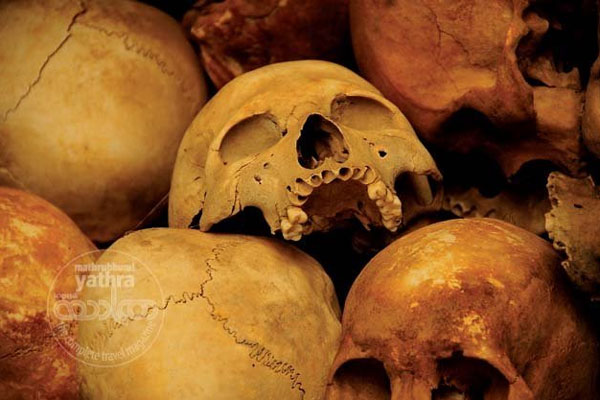 After riding 130 km in three hours, through the most rugged road which I have ever driven till now, it was dusk. We reached in front of the Beng Mealea temple. The solemn atmosphere became noisy in our bike's roar.

When the dust settled, the moonlit temple became clear. Then silence again set in. I realised slowly that we are far away from the civilized world and still very close to the crib of culture. Like fading away in the bosom of nature. A feeling that cannot be expressed. That was achieved by a lifeless machine. Just a motorcycle. Sometimes those two wheels can move your heart . 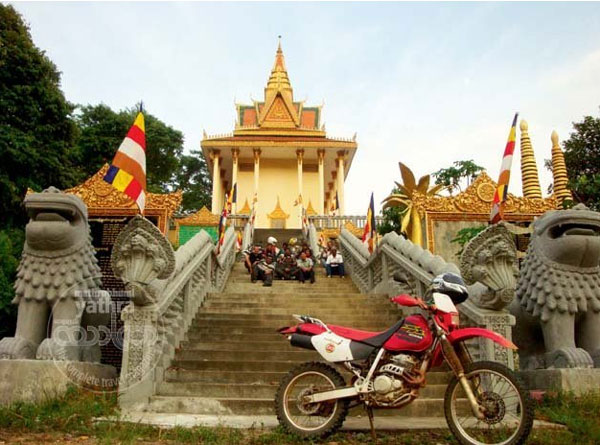 Travel Info:
Cambodia is in the southwestern part of the Indo-China Peninsula.The Kingdom of Cambodia has 24 provinces and a city. The Capital is Phnom Penh. International borders are shared with Thailand and the Lao People's Democratic Republic on the West and the North, and the Social Republic of Vietnam on the East and the Southeast. The country is bounded on the Southeast by the Gulf of Thailand. Cambodia is famous for its Angkorwat Temple, which is believed to be the largest temple complex of its kind in the world.

How to Reach:
By air: Cambodia has international airports at Phnom Penh and Siem Reap. 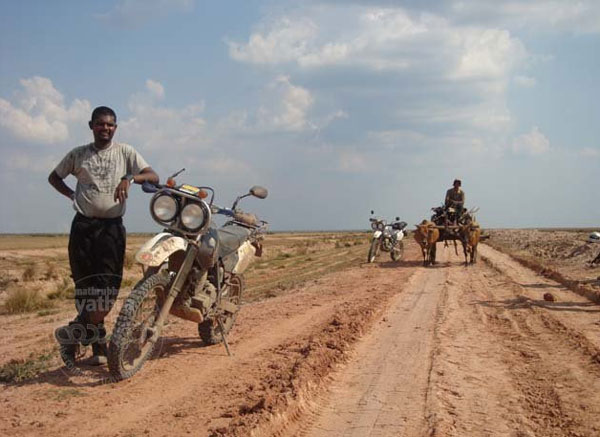 Entry Info:
Passport and visa are required. Tourists and business travellers may purchase a Cambodian visa valid for one month at the airports in Phnom Penh and Siem Reap. Both require a passport-sized photograph. A departure tax is charged on all domestic and international flights. 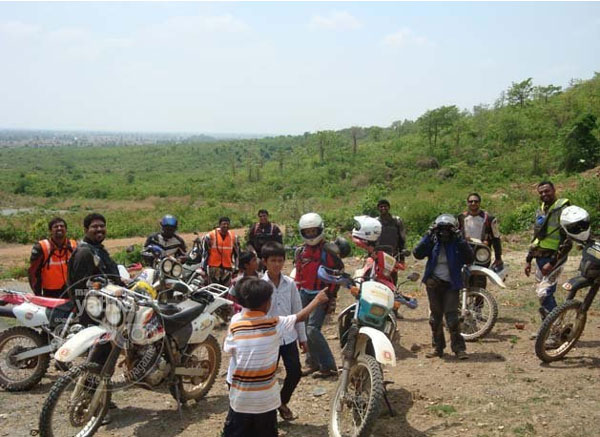 Bike tours:
Indimotors Adventures is a professional establishment having a fleet of 500 cc Royal Enfield Motor bikes. What you have to do is just go there with a helmet. They provide food, stay, medical facilities etc. Indimotors which conducts tours in India occasionally conduct tours abroad once or twice in a year. For details contact: www.indimotard.com