See Ooty on a bike

Rain, soft sunlight and fleeting clouds- a swift ride on the bike over the tracks on the slopes of the hill cutting through the veils of fog - a Magical Journey to a Wonder Land; yea, if you want to see Ooty, you should see it dashing about on a bike, this way. Our escape from the extreme heat of Coimbatore was amidst the rustic boisterously chattering Tamilians carrying bunches of plantain fruits, baskets and boxes in a bus laboriously climbing the mountain pass; and a smooth landing on to the pleasant coolness of Ooty. Now what? It was not a trip planned earlier. When our assignment in Coimbatore finished ear 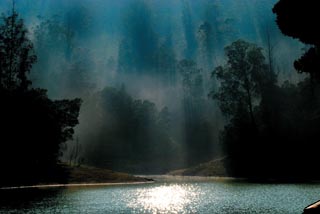 Rain, soft sunlight and fleeting clouds- a swift ride on the bike over the tracks on the slopes of the hill cutting through the veils of fog - a Magical Journey to a Wonder Land; yea, if you want to see Ooty, you should see it dashing about on a bike, this way.

Our escape from the extreme heat of Coimbatore was amidst the rustic boisterously chattering Tamilians carrying bunches of plantain fruits, baskets and boxes in a bus laboriously climbing the mountain pass; and a smooth landing on to the pleasant coolness of Ooty.

Now what? It was not a trip planned earlier. When our assignment in Coimbatore finished earlier than the schedule, we felt a craze to make this trip: 'why not go up the pass in the night'. Ammu also felt happy (sorry, just forgot to introduce her; Ammu is my wife). We both got onto the first bus and thus reached Ooty. Having had called up a hotel and booked a room before starting, we had a place to roost. Now what? we both had no idea; that was all part of the few thrills of such a journey: whatever may be, let the day break.

In the morning, first we thought about a trip to Coonoor by the train powered by a steam engine: that seemed a dream journey - a pleasant journey in a coal-fired train slithering downhill through the clouds; yea, let it be the beginning. We went straight to the railway station. Only on reaching there it was known that the steam powered train is not from Ooty to Coonoor, but from Coonoor to Mettupalayam. and the tickets are available only for the journey after two days.

Nevertheless, no question of coming away without travelling in that train, even if it is after two days. We took tickets. Now what to do? two days to go, thought of roaming about seeing Ooty. But how? It was then that Senthil Kumar, an auto driver, came forward to help us; he suggested, we could get a bike on hire. You can roam about however long for however many days and to wherever as you wish; not depending on anybody and caring about anybody else. For a car one would have to spend about Rs.5000/- but the rent for a bike is only Rs. 450/- per day. That would do, let us go to where the bike is available on hire. We told Senthil Kumar about this. He took us to Classic Rentals just opposite the famous rose garden of Ooty.

The owner of the Rentals Mr. Saravanan agreed to give us a bike; he required a copy of ID card and the Driving Licence and a caution deposit of Rs.500/-. On agreeing to the conditions Saravanan took us to show the bikes; a show room excelling even a two wheeler sale shop. A lot of bikes are displayed in rows: geared and non geared bikes. You can choose any of them. We chose an elegant Honda Blaze and darted out.

First of all, we decided to go to the rose garden on the hill: a garden emanating the fragrance of romance - a carpet of colorful flowers - a garden on tiers at different levels with flowers in different colors, creeper roosts and flower beds. Standing atop one could see a wider aerial view of Ooty.

In Ooty, there are two main roads to ride about on a bike: one is Ooty - Mysore National Highway and the other, Ooty - Koonur Road. We chose Koonur road first. The beauty of that road is indescribable: a road, diffused in nature bathing in a mixture of colors, seeming to stretch to infinity as if the colors on a painting brush put to water trailing away, with hills and plains and the horses grazing on them and pine forests. That road seemed familiar to us as having seen already in a dream. We have seen every bend and curve of this hilly track covered by flowers, in many song scenes in movies; a lazy meander, stopping wherever you liked and eating roasted corn hobs and fresh carrots. We wished that this journey never ended. 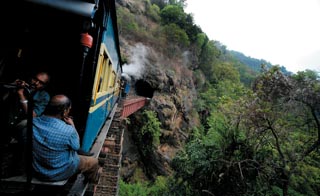 Traveling 23 kilometers, we reached Pykara Dam, accompanied by a drizzle also. Pykara is a fresh water lake. The cruises in this lake are on boats run with cooking gas; may be not to pollute the water. During the boating the rain stopped suddenly and then the sunlight and a rainbow and the fog from the forest surrounded us. After an insatiable drive through those tracks the whole day, we reached the hotel late night. We decided to go to Koonur next morning. Enjoying the fog and the coolness of the night, we slipped in to sleep. Koonur road is quite different from the Mysore road. In the morning, just after travelling a short distance itself we realised that; there are more curves and bends in this road.

The distance to Koonur is 18 kilometers. Passing by some small industrial establishments and a Siva temple in between, we reached the Valley View Point, from where you could see the whole Ooty through a telescope Deep valleys, railway tracks, churches, carrot orchards and the invisibly long hill range covered by fog could be seen sprawled in front of us through that telescope.

Simi's Park, tea gardens, Dolfin's Nose view point, Laws Falls and Lamb's Rock are the attractions awaiting the visitors to Koonur. We saw the whole Koonur riding the bike. Then we reached the High Field Tea Garden, riding through the small path between the tea plants with the tender leaves shining in the soft sun light in the morning. Here the tourists are allowed to walk around and see things. We walked around and saw the plucking of tea leaves to the different stages of processing. The price and quality of tea depend on the sizes of the granules of processed tea. The larger granules are usually exported, From a shop near the factory, you can buy tea leaves.

Another attraction of the bike riders are the food from the 'Thattukadas' (Small 'platform' shops where you get instant food) on the road side. On the way you will get steaming food in several places: a seven course lunch at a very low price. The next destination is Doddabetta Eye Point. On the way there is a chocolate factoty and a tea museum. Doddabetta is a hill of sky scraping pine trees. We rode around through the curved roads with dim light till the evening. Third day - the train to Mettupalayam is afternoon noon. We have got time till then. We saw the Botanical Garden and the lake on bike in the morning itself. 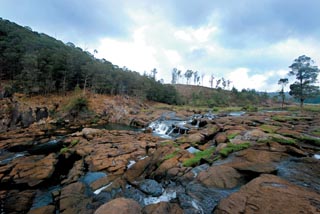 We returned the bike by noon. Again we called for Senthil's auto and went to the railway station. The train would leave at 3 O' clock. Standing in that railway station built in Victorian era style, our mind would go back over centuries: the journey in the coal-dust emitting train and the faces in amazement of the people waiting and looking at the train along the way. The train started to descend the hill emitting white smoke to the sky inching between tea plantations and jungles. One should really experience it to know the thrill of that journey.

The train reached Mettupalayam as if descending from the clouds; after roaming in the heaven for three days, a smooth landing back. Alighting the train, we had the coal dust, soot and mud on our hair as marks of the indelible memories of a journey. A journey not pre-planned ends here. That was good. That was the thrill of that journey.