The mind of the forlorn lay entangled on the wheel â€“ an uneasiness mixed with anger, sadness or something else - even felt whether there would be any benefit out of this journey. Having decided to go and already reached Nilamboor, we did not feel of calling it off. Besides, Kakkaadampoyil, the 'sandwich' between Kozhikode and Malappuram, was playing in our minds. Only because we heard that there might not be any better place than

Synonyms for adventure are plenty. Among them, some find enjoyment on circuits on wheels. Here is a jaunt savouring the excitement of off-roading: On to the green of Kakkaadampoyil. 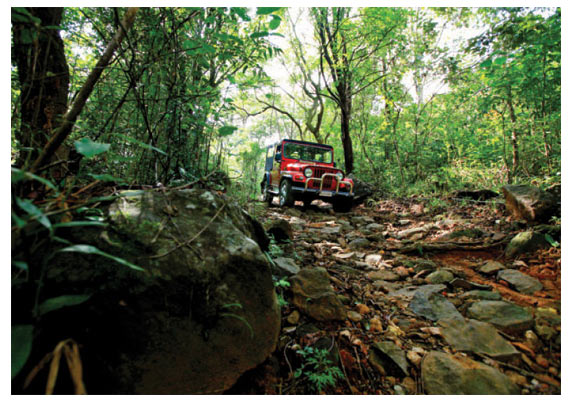 The mind of the forlorn lay entangled on the wheel â€“ an uneasiness mixed with anger, sadness or something else - even felt whether there would be any benefit out of this journey. Having decided to go and already reached Nilamboor, we did not feel of calling it off. Besides, Kakkaadampoyil, the 'sandwich' between Kozhikode and Malappuram, was playing in our minds.

Only because we heard that there might not be any better place than Kakkaadampoyil to try the thrill of off-roading, we started off to this place; the roadless path to here was so rugged - a perilously adventurous terrain with boulders, steep ascents, cascades and rain forests.

Immediately on deciding on this trip itself we had enquired about the availability of a Willys Jeep, an apt vehicle for the off-road drive, with our friends in Nilamboor. The Willys was the vehicle of the US Army during the Second World War. When the army discarded it, it became the vehicle of choice of the adventure minded. Before starting itself, we had got the reply that a 1964 model Willys was available. The thought of the thrill of an adventurous drive in the Willys brought us up to Nilamboor.

Next day morning there was a red Willys jeep in front of us. Just staring on at it by itself was fun. Admiring it thoroughly all over, just touched itâ€¦.yet whatever is to happen would happen. As we were about to start, the words that occasionally flashed on Doordarsan TV programmes, seemed to appear in front of it: 'Sorry for the interruption'. Then what we saw was the frame of the red Willys fading away; its problem was 'technical'. 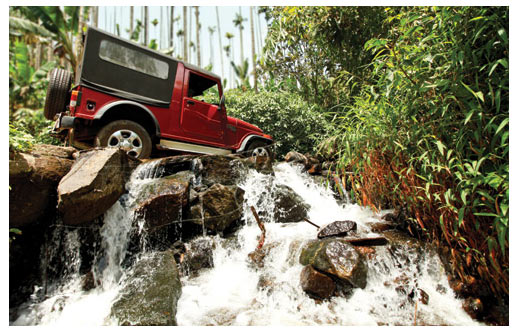 All the excitement for the trip also vanished as the Willys Jeep. 'Damn it!', so we cursed it several times in our mind. Consoling ourselves, 'having come all this way, let's not get put off', we started off in an ordinary four wheel drive jeep to Kakkaadampoyil.

As the Shornoor Passenger train moved away slowly from Nilamboor station we entered in to the Vazhikkadavu road passing Chandakkunnu. We crossed the 'Mayilaadipaalam' bridge over Chaliyarmukku, where Karimpuzha, Punnapuzha and Neerpuzha (all small rivers) meet. All around there was the shade of Mahogany tree plantations.

The village road was almost deserted; occasionally there were some auto-rickshaws and cycles coming from the opposite direction. Surrounding were the rice fields. Going a little farther, we saw a rocky bluff jutting high over the rice fields and the jungle. That is called Kuruvippara; standing on that, you can see Nilamboor as through the bird's eyes.

Now on to the first phase of the off-roading: A bridge was coming up across Kuruvan River â€“ the Moolayppaadam Bridge. On both the sides of the bridge was red mud. We crossed the bridge swaying and bumping over the tracks made by the earlier travels. Before this bridge came up, the way to Kakkaadampoyil was through Areekkode. Passing the bridge, Pantheerayiram (meaning twelve thousand) appeared in our view clearly; the Twelve thousand acres of the forests in Nilamboor is called 'Pantheerayiram' by the locals.

Moving farther, a village junction came to the view: it is Vendaekkumpoyil with only a few shops and a tea shop with smoke rising from all its sides, the main 'tummy filling station' of the place. Behind a veil of smoke, Appachan chettan was making tea. At a corner of the shop, four or five people were playing cards. This is the congregation for three 'ch's - naively we asked 'what?': Ch'aaya (tea), Ch'archcha (chatting) and Ch'eettukali (playing cards) - and the main recreation centre of the place. The table for playing was a bit bigger. We left the place after drinking Appachan chettan's *'one and a half meter' drawn tea' 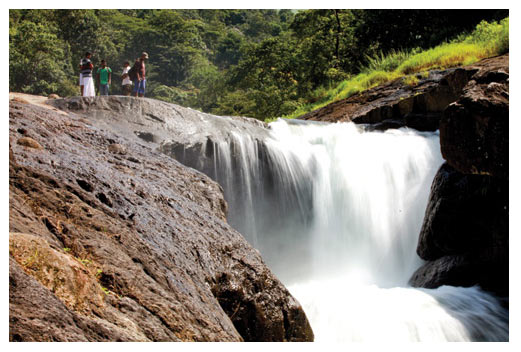 Then all of a sudden a godsend came in our way in the shape of a jeep as if dipped in grape wine. As we stepped on to our jeep, a brand-new Mahindra 'Thar' 'off-roader' jeep landed up aside us braking abruptly. Naively, we wished if we could have had the drive in that vehicle. 'Coming to Kakkaadampoyil?â€¦', we asked the man sitting in the driving seat. His name was Anil Lilac. Lilac was his shop's name.

Though we invited him without any expectations, it turned out to be a lottery; Anil was a crazy traveler, especially enjoying adventurous travels. He had just returned after a 16 day all India trip. He regretted that he did not know that there was such a good place for off-roading so near Nilamboor.

Thus we got into Anil's new 'Thar' and started to the heights of Kakkaadampoyil. Our first stop was Kozhippaara waterfall. The Kakkaadampoyil 'town' vanished behind. There were not many shops in this 'town'. Most of them had not even been opened. Yet for the locals, that was more than enough. This town is the refuge for the tribes of Nilamboor forests.

The hiss of the engine merged in the roar of the water fall. A little away from the main path, you had to walk a small distance through a narrow trail of just the width of an umbrella. The water fall was like pure white silk sprawled down amidst the green around and the blue sky above; gliding down from ridge to ridge it disappeared back into the green afar.

Kakkaadampoyil is a 'Hartal' tourism centre; during the days of Hartal (the civil disobedient strikes), people from the neighboring places would come down to Kakkaadampoyil. The paths to this place would be crowded with parked vehicles from the surroundings of Nilamboor. Most of them would be motorbikes and again the most would be heading to Kozhippaara waterfall. Since there are many terraces, it would not be too crowded to partake in the bathing bash.

On to the jeep from the water falls; as the tarred road ended, the 'Thar' became more vigorous; it started grunting well once. The pathless trail made by the down rush of rain water from the hill was narrow and strewn with boulders. With a cockiness of negotiating any terrain easily, the vehicle darted forward. But going forward, it started 'panting'. As they say in Thrissur slang, it was only 'a saymple fire work'; the arduous ascent was peeking down on us from the top. 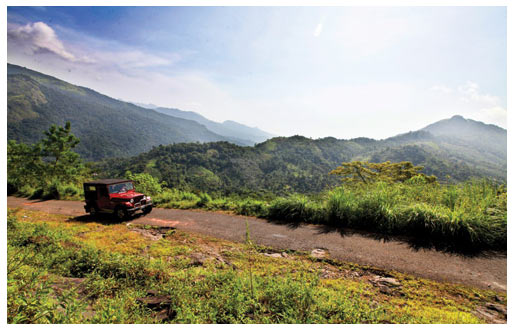 'How do we go up to the hill without seeing 'Brandi Acchan' (Brandy father)â€¦?' quipped Sabu, our rustic driver of the other four wheel drive. Curious about that name, we entered the church on the hill side. The parish father there got that moniker not because he was a drunkard. Father Chandi Kurisummoottil had it because of his tireless fight against alcoholism from his younger age to make Kakkaadampoyil an alcohol-free village - a short figure wearing saffron coloured Jubba and pants, with a curly hair of varying grey hues and still kinkier beard. On seeing our cameras, he wished 'I could have put on the vestment.' But talking on about 'the alcohol matters' he forgot about the vestment. While climbing the rock of about an elephant's height behind the church, father also joined in. 'How pleasurable, you know, it is to sit on this rock and meditate every evening!' he said. He bade farewell to us only after giving us a treat of very good ripe bananas grown in the church yard itself.

It did not take us too far to get to feel the 'original' (the rugged terrain) from the 'saymple'; every inch of the track reiterated that the path was only illusory. In between, locking the freewheel hub, Anil had changed the mode of the 'Thar' to four wheel drive. From there, the drive of the jeep was like a man clambering up on a wall; tyres hopping from one rock to another. At times the jeep would slip back unable to pull up - very heart throbbing moments.

As we broke out of the view-blocking jungles, we could see the sky filled with white shimmering clouds and the rain drenched green clad hills veiled in a fog. But one could not quite enjoy that sight sitting in a jeep. The drive up was shaking the whole body. Our heads banged on the inner sides of the jeep; everybody rubbing the aching part out of sight of one another.

Eventually when we reached the top of the mountain, we were like dough run in a mixer. It took about two and a half hours to cover just six kilometers. At last, we got to Iremo Hillvalley Eco Resort right at the top of the hill with house perched on tree and the views of the valleys. The resort has a swimming pool created by the nature in the rock. We planned to go after a few minutes' rest to the jungle; with vertical ascents and lot of blood sucking leeches. At every step, the leeches wriggled up on the legs and sucked blood. As we climbed the heights, the body and the limbs seemed to go numb. It is said that the caves used by the local king Pazhassiraja as hide-out during his fight against the British are around there on this hill. Our climb ended in front of a big rock looking like a cave. It seemed that this rock fell from above and got stuck up somewhere in between. We relaxed and cooled ourselves under that rock for a while. Thus resting, somebody commented 'Pazhassiraja too might have retreated here for a cup of tea' pitying the rock that could not become a cave. Then we started down.

Again we got in to the 'mixie' of the four wheel drive. The descent was more arduous and hazardous than the ascent. A slip in attention would finish us all. Finally when the 'Thar' reached the tar road, all seemed to have become expert 'rocking' artists.


If one starts the trip to Kakkaadampoyil from Nilamboor, one could have a train trip too in Nilamboor - Shornoor passenger. This is one of the shortest broad gauge railway lines in India: a single line track of only 65 kilometers and a journey by the railway stations still suffused in village environs as if seeing an old movie: sparsely few people waiting for the train in the railway stations dotted with gigantic banyan trees and the railway track hemming teak plantations, areca nut orchards and coconut trees on both sides.

The tea prepared taking the boiled hot ingredients in two big metal mugs held in two hands and pouring them from one to the other drawing the mugs apart as much as '11/2 metre' while being poured, thus blending and frothing the tea to give a typical tang; hence the epithet, 'one and metre tea'


Kakkadampoyil is a hamlet streched between Kozhikode and Malappuram Districts. It is set high on the Western Ghats, with altitudes ranging from 700 to 2100 m. There are many indigenous tribal groups in this area. It is one of the rare roughest motorable roads in Kerala and it is an ideal place for one who loves off road driving.

By road: Kakkadampoyyil can be reached from Nilambur and Kozhikode.