Are you sixty years old? Are you married? Is your spouse still alive? Then start immediately. Go to Thirukkadayoor Temple. Get married again!. It is not a joke. The day you complete your sixtieth year, you should come here with your wife. You should celebrate your sixtieth birthday in front of this temple. You should marry again and seek the blessings of Annai Abhiramiyamma. Life span, health, happiness and prosperity- all these will be showered on you. Thanking God for granting a long and happy married life and seeking the blessings for living together in the future. That is the Are you sixty years old? Are you married? Is your spouse still alive? Then start immediately. Go to Thirukkadayoor Temple. Get married again!.

It is not a joke. The day you complete your sixtieth year, you should come here with your wife. You should celebrate your sixtieth birthday in front of this temple. You should marry again and seek the blessings of Annai Abhiramiyamma. Life span, health, happiness and prosperity- all these will be showered on you.

Thanking God for granting a long and happy married life and seeking the blessings for living together in the future. That is the sixtieth marriage in Thrukkatayoor. Not just as a simple ceremony but it has to be conducted in a grand way. You should adorn your wife with 'Tali' and garland. Should conduct auspicious poojas and chant mantras. Should give feast to orphans. Should go in a procession accompanied with nadaswara and elephant. (You should celebrate the first night also!). Nobody's future life will be happy without marrying the partner again in front of this temple. Without it, no married man will get moksha! 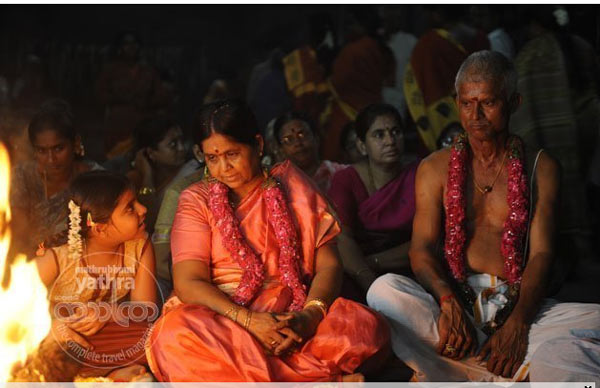 Suddenly I remembered my childhood incident, when I asked my parents why they did not take me for their marriage. And here it is, a rare occasion that every child gets to attend its parent's wedding. The crowd of the 'rare' marriage in Thirukkadayoor is increasing day by day, as the children and the grandchildren are eager to attend the ceremony. This belief and rites, which was practiced only in Tamilnadu, have now spread all over the country. Indeed, it is an opportunity to conduct a big family pilgrimage along with their children, nephews and relatives. Thrukkadayoor temple is located near Karaikkal in Tamilnadu.

We reached Thrukkadayoor by eight pm. Temple is on the way from Mayiladum Thurai to Karaikkal. Thrukkadayoor is a fairly big temple town with many lodges, hotels and marriage halls. The temple is big with a tower and fence, surrounding pathway, pillars and statues, which are made of granite stone. Like a halo of mystery, the temple stands in the fullness of night. When we came to the entrance, we got wonder-struck. The marriages are being conducted even at that time. We thought the crowd in Thirukkadayoor is a myth. Who will go for an elder's marriage? All was wrong. 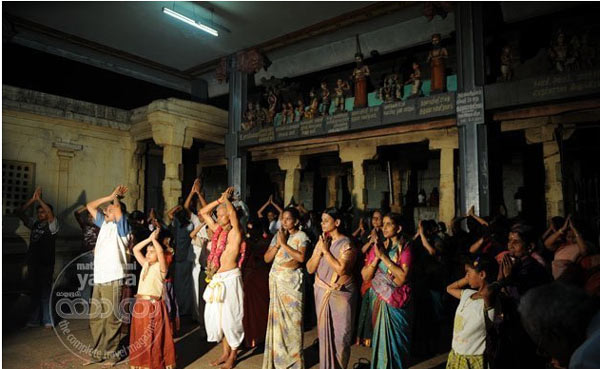 Marriages are being conducted in the granite paths, mandapas, corridors and everywhere. In several places you can see the circles of lights from the fire pits of poojas (homakundas) and small crowd surrounding them. You can see big shades created by this lights on the walls and dark corridors. The courtyard of the temple is filled with pit fires, smoke and fragrance. You can hear the sounds of nadaswara, the chitchat of the rushing crowd of relatives and the chanting of mantras within the walls of the courtyard. An unbelievable experience. Definitely, the marriage is not a child play.

Each marriage is conducted with lengthy ceremonies. Almost all the formalities of the old marriage will be repeated. The relatives will sit in a circle covering all sides. They will chant mantras in tunes in loud voices. All the luxury of a marriage, including silk sari, gold ornaments and jasmin garlands will be there. The bride, who may be a grandmother, will be coming in full make up wearing dandy dresses in the lights of the lamps. Wearing gold-laced dothis and shawl, there will be the grandfather bridegroom with a little blush on his face. You can see the brightness of youthfulness on their grey hair and wrinkled faces. Among the relatives sitting in a circle, there will be naughty laughters and devotional overwhelms. In this temple there is no ban for photography like in other temples. After all it is a marriage. 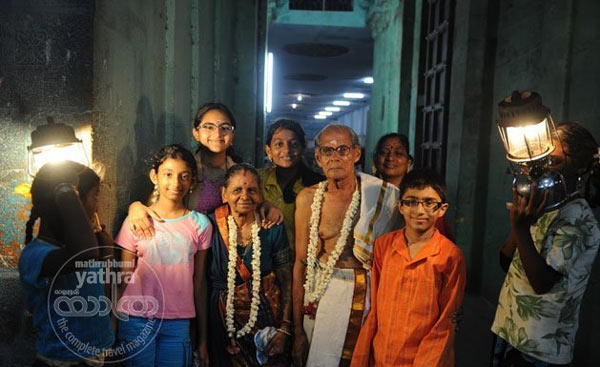 What will be the expense for a marriage? We approached a priest. You have to remit Rs. 1460/- in the temple for a marriage. It rates up to Rs. 5600/-. If you want to give food to the poor, and to perform celebrations like 'Kalkazhchoottu', the expense will be more. What will the priest get? 'That depends on the financial capacity of the client. Some times, the man who tends the elephant may be getting more than me'- he pointed his finger towards the tower.

Near the front door Abhirami and Sreekanthan are waiting for the couples to come out. (The elephant of the temple and its caretaker!) For the past thirty one years, Sreekanthan a native of Kulachchal, is in front of the entrance with the elephant. Sreekanthan says that there is nobody in Tamilnadu who have never visited Thirukkadayoor to pray for holy married life. You should conduct poojas at Thirukkadayoor when you get sixty, seventy or eighty years old. Once a VVIP visited the temple to celebrate her sixtieth birthday. It was former Chief Minister Jayalalitha. Her temple visit with close friend Sasikala became big news in Tamilnadu then. The fame of Thirukkadayoor increased once again because of that.

The persons, who come to Thrukkadayoor to get married again and pray for happy married life, usually are long wedded couples. For a long time Sreekanthan told us the stories of the temple.

Another story is that Thirukkadayoor is the place where Paramasiva killed Yama and rescued Markanteya. This is the place to pray for long life. Abhiramiyamma and the Ganesh who is called 'Kallavaranan' are the other important deities Time is thirty minutes past ten. Night is already dark. Marriage groups are still moving around the streets carrying petrol max. The nearby lodges are also crowded. In some places feasts are going on; in other places receptions. Some others are busy leading the couples to the first night room. Children and nephews are standing with a naughty smile on their faces. And you can see the couples with satisfaction of the blessings of the Abhiramiyamma on their shy faces.