One among the group moving in front called 'Hara Hara Mahadeva'. ' 'Bham Bham Bholanath' the pilgrims descending the hill wished them in reply. Here, every thing is in the memories of Lord Siva. In the minds of the believers Kailasanathan (Lord Siva) is the potentate of the whole Himalaya. You can see the praising of the Lord Siva every where in the myths which were inherited from generations to generations, who is a dancer, hermit, curmudgeon and give quick blesses. The clear sky darkened. Drizzling started. The weather in Himalaya is like this. It will change quickly like human mind. In front there is a zigzag path with stone pavem One among the group moving in front called 'Hara Hara Mahadeva'. ' 'Bham Bham Bholanath' the pilgrims descending the hill wished them in reply. Here, every thing is in the memories of Lord Siva. In the minds of the believers Kailasanathan (Lord Siva) is the potentate of the whole Himalaya. You can see the praising of the Lord Siva every where in the myths which were inherited from generations to generations, who is a dancer, hermit, curmudgeon and give quick blesses.

The clear sky darkened. Drizzling started. The weather in Himalaya is like this. It will change quickly like human mind. In front there is a zigzag path with stone pavement, going upwards. There were thick jungle on both sides of this path which surrounds the hills.

There are many specialties like this to Kedarnath which is one of the main temples among the Hindu pilgrimage centers. You can reach to Kedarnath only for six months in an year, which is 11746 feet high from the sea level. During the remaining time, the temple will be covered with snow. Before that the statue of The Lord will be brought to the temple in Ukhimath which is 65 kilometers away. In the snow season the rituals will be conducted there. 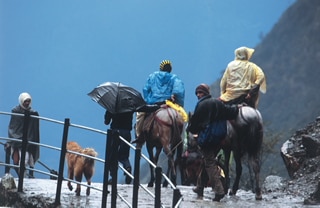 For the pilgrims, this is the ancient way to the temple. This is the third temple in the journey to Chathurdham which is blissful to the believers. Before reaching Badrinath via Yamunothri and Gangotri, the believers come to Kedarnath. Among the 12 Jyotirlinga temples in the country, Kedarnath is at the extreme North. But the believers come from every places. There will be foreigners who are seeking peace and adventure loving tourists among them. Non weary and non tedious foot steps. Like a sixth sense hoping for amazements, hidden some where in inside them.

There is an ocean of stories connected with Kedarnath. There are Siva, Paravathi, Pandavas and great ascetics in those stories. The Gaurikund where it is believed that after her bath imagining Siva as her husband in her mind, Pravathi used to stand in hard penance every day. There is also a myth that Lord Siva fixed an elephant's head to his son when his real head was chopped off. Here there are temples for Paravathi and Ganapati. Every pilgrims take a bath in the steaming stream in Gaurikund before climbing the hill. You will have to walk 14 kilometers upwards from here to Kedarnath.

If you have difficulty in walking you can go on a horse. Otherwise you can go in a stretcher carried by Sherpas. But you should be careful while riding on a horse. Since they use to go up and down several times a day, a slip of their foot will bring accidents. The authorities will renew the fees for hiring horses and stretchers every year. When we were climbing the steep ascending, we started to sweat under the sweaters. You can see tea shops on road sides, waiting for the tired passengers.

'Do not climb in haste. If you are not careful, the muscle will catch.' When we were sipping the tea, the ascetic sitting on the other end of the bench smiled. 'less luggage, more comfort. Not only in the journey, but in the life also.' Again he smiled.

His name was Sadananda Umabharathi. He belongs to Ujjain. Now he is coming from Dwaraka in Gujarat after worshiping there. There was a small sack in his hands. A walking stick and a tiffin carrier. That is all.

'Even after big preparations, some times you may not be able to reach the destination. Look. Can you see these mountains with strong looks? It may fall down in a rain. If the time comes, Lord will call you to see him..' Chathurdham is not a place like other pilgrimage centers with luxury and comfort. You will have to face accidents and hardships to cover the journey. You can not say that it is safe. In various spots on the way to Chathurdham you can see this board. 'Do not park your vehicle here. There are possibilities of land slide.' The check posts in between the gateways of the towns will be closed at 9 PM. This is a precaution against the land slide. The journey up to Kedarnath is through a foot path. Near by here is Mandakini. Splashing on small rocks and making surf, this river flows from the hills of Kedarnath.

Sadanandabharathi has came to Kedarnath several times. Himalaya also change along with the seasons. That is why the journey of 221 kilometers from Rishikesh to Kedaranath becomes sensational. Not only Kedarnath but the whole Chathurdham journey is like that.
If you come once, the Himalaya will call you again. There are many regular visitors like that. You can also find photographers seeking the change of attire of the nature.

On the way to Kedarnath you can take a little rest at Rambara and Garud Chatti Dabas. Under the slanting roof projecting to the narrow path, the food is ready. Because of the tiredness of walking, we were very hungry. The food was very tasty.

(Look in to your mind, the glory of Siva, where is the pain? Every thing is God's play.)

A singer is singing aloud with his closed eyes. There was a chorus with him. They are playing the Dolak (a rhythm instrument) with their hands covered with ash.

Now it has become dark. If you look from Garud Chatti, you can see Kedarnath at a distance 500 meters. You can see the lights from the lamps, the tower and the street at the bottom through the fog like a smoke. You should reach Kedar before dusk. That will be more convenient for stay and other things. When we got under the rajoyi (blanket) wearing sweater and jacket in the method of Punjab Sind Yojana, the sleep came to us instantly. 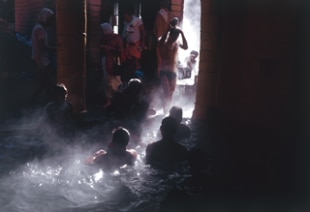 We woke up hearing the bells. When we came out after taking a bath in the hot water, the chillness came and covered even our breath. In the clear sky the first rays of sun started to spread. The crowd of the believers started to flow under the shining golden dome of the temple.

The myths says that the temple in Kedarnath was built by the Pandavas. After installing the Chaturmath, Sree Sankaracharya came here and built a new temple in the same place, Sankaracharya came to Samadhi (expired) here at the age of thirty two. In the memory of that Samadhi, there is a wall made of white marble near the temple.

It is calculated that this temple is 1000 years old. In the inner room of the temple which was made of big grey granite sheets, there are statues of Gods and Goddesses. The believers can conduct rituals directly in the temple. Can offer flowers. You can shower the statue with the holy water brought from Gangotri.

Inside, there are echoes of the weeping prayers. The mind melting prayers of the believers who came all the way from different places with offerings, became a great river of sorrows.