One of the attractions of Kottiyoor, the southern Varanasi, is the hill called 'Paalukaachimala'. For the believers, this place is a holy place where the divinity of Siva and Paravathi dwells. And for the tourists it is a trekking point of natural beauty.Three hills stood bowing their head in front of Parvathi Devi as three stones and the divine Siva-Parvathi converted the hills into a fire-wood stove ('aduppu'). Into a pot over the stove, milk was poured. The trees bowed their heads politely and bending down their branches filled the stove with fire-wood. The fire from the stove passed heat on to the milk pot. The Lord Siva furled out h 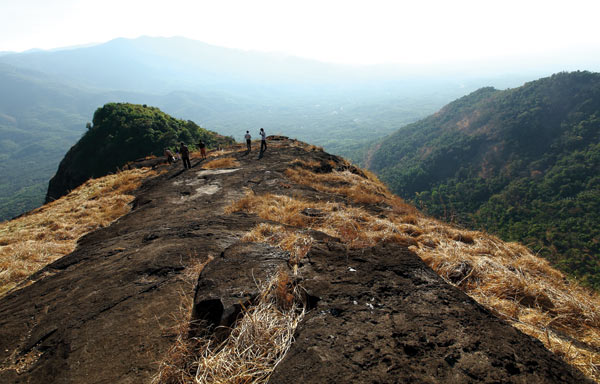 One of the attractions of Kottiyoor, the southern Varanasi, is the hill called 'Paalukaachimala'. For the believers, this place is a holy place where the divinity of Siva and Paravathi dwells. And for the tourists it is a trekking point of natural beauty.Three hills stood bowing their head in front of Parvathi Devi as three stones and the divine Siva-Parvathi converted the hills into a fire-wood stove ('aduppu'). Into a pot over the stove, milk was poured. The trees bowed their heads politely and bending down their branches filled the stove with fire-wood. The fire from the stove passed heat on to the milk pot.

The Lord Siva furled out his tussock. The Moon blossomed out in the blue sky; and a sea of milky moon light all around. The moonlight rays reflected on the Baavali river flowing away kissing the valley like golden frills blooming out. The hill ranges seemed bathed in the blueness of the moon light. In anticipation of some exciting moments, the stars looked down even without blinking. The honey moon of Siva and Parvathi started in that blue night beautified by the nature. It is said that the couple even forgot the boiling milk in that beauty of the night.

The milk boiled and the milk pot was overeflown and ran down the hill as streams of milk. The milk streams made waves in the white moonlight. In between the honey moon of Siva Parvathi, the three stones of the stove became hills again. The hill where the milk was boiled and over flown became 'Paalukaachimala'. Thus came about the myth on the origin of 'Paalukaachimala'.

Passing the Kellakam town in the Peraavoor - Kottiyoor road you can see three hills jutting up the head on the north-east direction. That hill is Paalukaachimala, which always amazed the pilgrims coming to Kottiyoor, the Southern Kasi (Banaras).

The name Paalukaachimala brings back my memories connected with the Kottiyoor festival. I recall the memory of looking at a decorated big lorry carrying many idols, while I was in any small class. I still remember somebody telling that it was going to 'Paalukaachimala'.

The Kottiyoor pilgrimage begins around when the rain starts and continues for 28 days; it may be in the end of May or in the beginning of June. For the pilgrims to Kottiyoor, Paalukaachimala is a great sight. Paalukaachimala is one amidst the cluster of hills adjacent to the hill ranges of Wayanad. During the rains, Paalukaachimala adorns more green. On the slope of the hill are a lot of rocks. The streams in the wilderness formed during the rain fall on the rocks, scatter and run down as milky streams. These milky streams is the attraction of Paalukaachi and the basis of its name. Whenever I went to Kottiyoor these hills have attracted me a lot. My wish to climb this hill at least once is several years' old.

Chunkakkunnu comes three kilometers after Kellakam on the Thalassery - Kottiyoor road. From there it is only about two kilometers to Kottiyoor. On passing Chunkakkunnu mosque you would reach Pottanthod - Ottaplavu junction. By turning left from this junction, you can reach Paalukaachimala via Ottaplavu. There are two other routes also to Paalukaachi; one is via Kottiyoor and Neendunokki route and the other via Adakkathod and Ramachchi route. To enjoy the beauty of nature, Ottaplavu route is better.

From Kellakam or Chunkakkunnu, you should travel by jeep. Even though the road from Chukakkunnu to Ottaplavu is narrow, it is somewhat good. The distance from Chunkakkunnu to Ottaplavu is about four kilometers. Ottaplavu is a small junction. By the way straight from that junction, you would reach Paalukaachi. The road to the right leads to Thullanpara. Going a little ahead from that junction, the tar road ended. The road ahead was full of pebbles. Driver Pushpakumar stopped the vehicle. To go further up from there, a four wheel drive jeep itself is required. George and Sijo, the natives of Paalukaachi, who can arrange essential facilities for the tourists, also came for help. They snatched a jeep with driver come for a marriage for half an hour. Biju's jeep roared up the hilly track. On one side was big hills. You can see rubber hoses conveying water laid across the road here and there; there are no wells on the slopes. Instead the rocks yield good clean water. You can collect it in your hands. Sijo got down and lifted the hose. The jeep went under the hose. You should never block the drinking water for the people on the slope.

Roaring and at times squeaking, the jeep continued climbing the hill. When the rattling of the jeep became scary, we looked up at the driver. Unmindful of that, Biju concentrated on his driving. We even thought about getting down and walking. Finally when the jeep reached Ottaplavu Top, we got down. 'For how long have you been driving?â€¦..' shaking hands we asked Biju. '12 years.' ...To drive on these hills, one should have good experience.

The trekking to Paalukaachi starts from Ottaplavu Top. The trekking is by the valley of the first hill. The beginning is through private properties. Although it was a migratory area once, there is only one family remaining in this place now. The others all have evacuated. On the trekking track one could see deserted houses here and there. The intrusions from wild animals and the land slide hastened the evacuation. The journey from there was over the mud turned up by wild pigs. To climb the steep ascending Sijo arranged some walking sticks. Stepping on the pebbles hidden covered by dry leaves often caused to loose balance while walking over them.

Giving a thrill to the trekking, different views of Paalukaachi appeared before us: rows of hills seemed touching the sky, steep slopes intermingled with rocks, bushes and meadows and streams seeping out from the rocks. The trekking was by the slope of one of the three hills. The meadows disappeared heralding the jungle. Reaching near a tree we got a peculiar smell. 'This tree is 'Bhoothiyunnarthi', a favourite of Ayurvedic doctors', George told us. Entering the jungle passing the meadow, we started feeling very cold. The sound of crickets was predominant;a jungle with all the beauty of an ever green forest. We reached the top of the second hill one and a half hour after the start of the trekking. The trekking path split in to two: one extended through the creepers. There was a granite statue; no head. By the bludgeon in the hand, we could make it out to be the statue of Hanuman. Going ahead, we saw more statues, Siva and Paravati, Nandikeswaran, Ayyappan, Ganapathi, etc. made of granite and installed at various places. A lot of effort might have been taken to bring these statues to this height. Due lack of maintenance, many statues have lost some parts.

The jungle ended and again meadow started; with that pester of the thorns called 'Thodali'. Sijo mowed them with his knife. Paalukaachi is a depository of bio diversity. Ther were many blossomed plants: blue, yellow and red flowers. There were big rocks where the meadow ends. Standing there, you can enjoy the most beautiful view of Paalukaachi; hills all around. You can enjoy the hills of Waynad on south, east and north directions. The hills extending to the west go to Coorg via Aralam Wildlife Sanctuary. You can see Ikkare Kottiyoor temple and its surroundings and the town clearly. On the east side, at a distance, you can see the peak of Brahmagiri hills. One of the amazing sights of Paalukaachi is the Baavali river flowing from east towards west cutting across the paddy fields in the valley. You will get the best view of Baavali if you climb up Paalukaachi during the months of November and December.

Now here is a descend. That will lead us on to the third hill. Looking up from afar, you might feel that you would not be able to enter there. We continued our journey with the encouragement given by George. The path is not that comfortable; at times, thorns and dry grass scratched our body. We took half an hour to reach that hill. The steepness on the east side reminded me about the suicide point at Kodaikanal. Not many people seems to visit this place filled with trees and meadows. There are also some discarded granite statues.

There is a crucifix also on Paalukaachi showering blessings on the visitors here. On Good Friday days, The pilgrims flock to this crucifix of St. Thomas. If anybody wants to stay at Paalkaachi at night, they can get permission and build a camp. Through the road starting from here you can reach Kottiyoor via Neendunoekki and to Adakkathoettil via Santhigiri. Paalukaachi becomes more beautiful in the moonlight. As the dusk falls, without batting the eyelids, you can enjoy watching small lamps lighting up at the inhabited areas on the lower slope of the blue hued hill. When we see Kellakam, Kollakkaad and Kottiyoor towns getting illuminated and far below, the waves in Bavali reflect the moonlight, it may seem as if you see the sights on earth from the sky; no wonder the Godess Parvathi forgot about the milk kept for boiling!. 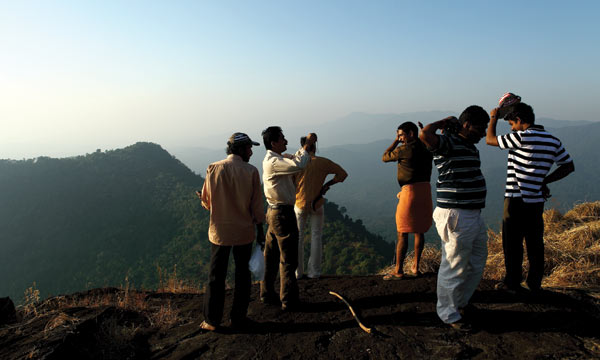 The bird sanctuary Pakshipaathaallam is on the nortth east side of hill range that includes Paalukaachi. You can reach here through the jungle via Kottiyoor - Ambalappara. The adventurous can enjoy this trekk. But one has to obtain permission from the Forest department. And you should have the company of watchers who know the route.

Kottiyoor temple known as the Southern Kasi is at the valley of Paalukaachi. From Kottiyoor you could reach Thirunelli via Ambalapparra by travelling for one day through the reserve forest. Kottiyoor reserve forest is a paradise for the bird watchers. In this jungle, you can see all types of birds found in Western Ghats. You can enjoy the natural beauty while travelling from Kottiyoor to Mananthavady through the Boy's Town road.

If you are travelling during the months of November and December, you can see some waterfalls also. The origin of Vallapattanam river is on this way. Aarrallam Wildlife Sanctuary is an extension of Kottiyoor forest. You can reach the entrance of Aarrallam Wildlife Sanctuary via Chunkakkunnu, Kellakam, Kenichaal and Vallayancal or Kellakam, Adakkathod and Vallayanchaal.

How to Reach:
By Road: Palukachi, near Kottiyoor, is 74 kms from Kannur town. KSRTC and private buses to Kottiyoor are available from Kannur and Thalassery. From Mananthavady, KSRTC Buses to Kannur via Boy's Town and Kottiyoor stop at Chunkakunnu. Hire a 4 wheel drive jeep from there to Palukachi. Trekking path starts from Ottaplavu.
By Air: Karippur (Kozhikode): 172 kms
By Rail: Thalassery. 61 kms