There is only one drive-in beach in Kerala. That credit goes to Muzhappilangad, Kannur. A dream beach, one kilometer away from N.H.17 towards west between Thalasseri and Kannur - as if Muzhappilagad Panchayath has been adorned with an anklet by the Arabian Sea. Beach is seven kilometer long and about 100 meter wide. During the low tide when the sea recedes, the width will increase to more than 200 meters. Since the shore is curved like a semicircle, from one end, the other end of the beach can be seen. Giving a green border to the beach pine trees stand majestically along the 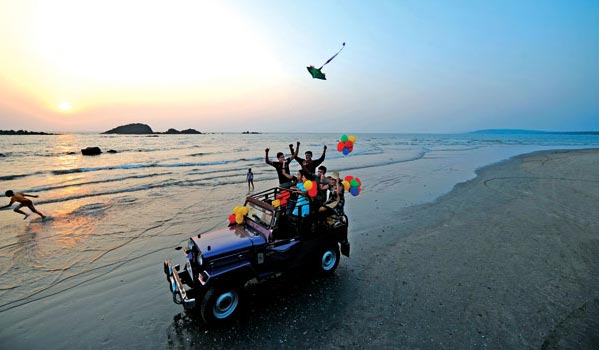 There is only one drive-in beach in Kerala. That credit goes to Muzhappilangad, Kannur. A dream beach, one kilometer away from N.H.17 towards west between Thalasseri and Kannur - as if Muzhappilagad Panchayath has been adorned with an anklet by the Arabian Sea.

Beach is seven kilometer long and about 100 meter wide. During the low tide when the sea recedes, the width will increase to more than 200 meters. Since the shore is curved like a semicircle, from one end, the other end of the beach can be seen. Giving a green border to the beach pine trees stand majestically along the shore. Beyond the pine trees under the shadows of the palm grove, foreign tourists sipping sweet toddy. Waves that slowly hug the shore seems to be having the modesty of a shy girl. In the eastern sea the Dharmadam islet is full of palm trees and creepers. Of course the surf filled Muzhappilangad beach is a beauty. More than a drive-in beach, Muzhappilangad seashore is a good place for unloading your tensions. To reach Muzhappilangad you have to travel 65 Kilometers from Thaliparamba. Covering this distance in a goods auto to reach Muzhappilangad on Sundays is a cheap affair. The auto driver Sayid of KL 13-N-1743 'Barakkath', has only one thing to say. The happiness of driving in the beach, it is a different experience. To share the happiness of beach driving, his friends Ubaid and Shafiq come regularly here along with Sayid.

When the trendy vehicles like Santro, Tavera, Sumo, Innova and the roaring country Jeeps make the evenings at Muzhappilangad beach thrilling, Sayid drives his auto here and there like a buzzing beetle among them. Muzhipilangad beach- where there is no distinction of status.

Sundays. The day that everybody come to Muzhappilangad. Air hostess student Sariga, 1 st year B.A. Psychology student Neetulal, 9th standard student Nikhila- all of them have come here to taste the excitement of Muzhappilangad beach. The P.G. students of Kannur University Campus, Biju, Devesh and Binith also have come here to know about the drive-in beach. Chatting with the sweet waves that comes to the shore, splashing water, and making their footprints on the white sand, they communicated with the beach. A short rest at the Beach Pavilion, which is the beach guesthouse. The tourists at the guest house are received with tender coconuts. They are given tender coconut as welcome drink. That too cut in front of them. That is the routine of the beach.

The foot tickling waves invited them for a journey. But, who will take them? Shaji the Beach Pavilion manager dialed the number 9895992071. Here comes Sathar Muzhappilangad with a beaming face, in his engine powered big boat. Sathar is ready for the sea journey arranged by D.T.P.C. approved travel agencies. He reminded them about the preparations for the sea journey. At the skill of Sathar the boat shot ahead parting the waves. The shore slowly went backwards. With the rise and fall of the waves, the boat rocked slowly like a cradle. When the sea, which they have seen only from the shore till then, came closer clouds of a slight fear appeared on the faces of the playful tourists. Don't be upset. Sathar gave them courage. Sathar is not a simple guy. He has appeared in about five movies. In the movie Balram versus Taradas he was the man who drove the speedboat in the sea as Mammotty's dupe, he said with a little pride. You can see Sathar here and there in the movies Rakshakan and Black. Whenever a rescue operation is needed in the sea, Sathar is ready. 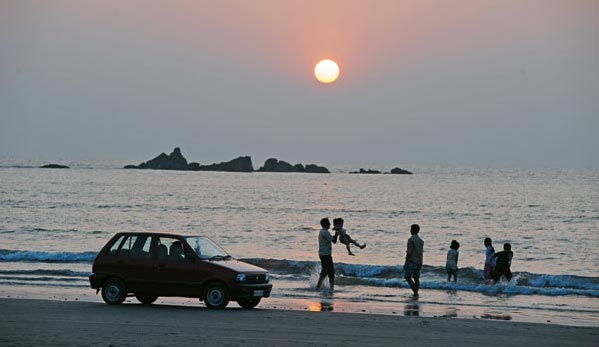 Away from the seashore dolphins received the new guests. One or two of them came near the boat and lifted their head to look in. They seem to think... oh, is that you... and again went under water. Muzhappilangad beach is also the dolphin's drive-in beach. In the boat journey between Muzhappilangad beach and Dharmadam islet, dolphins are regularly seen. If the journey is in the early morning, many dolphins appear immediately after you leave the shore. Usually dolphins come to the shore when the wind is still.

Some times a mischievous wind called 'kachan kaatu' comes to Muzhappilangad. This wind even lifts the sand. The arrival of kachan wind is usually in the month of Makaram of Malayam calender. It lifts sand from one side of the parked vehicles and put it on the other side. There will be a pit where the vehicle was parked. This Kachana Kaatu is one of the mysteries of this shore. When the boat left the shore the roaring of the waves stopped. The swinging of the boat became rhythmic. Behind, kilometers away the shore. Infinite sea ahead. Wriggling and shooting fishes. Burning sunlight. Everyone wore hats, except Sathar.

By the time they return, first class meals will be ready in the Beach Pavilion. Rest for a while. Then again back to the shore. Otherwise you will be missing the rare beautiful sun set.

The evenings of Muzhappilangad are a rare view you can get in the Indian shores. Vast shore, widespread sea, sparkling waves that kiss your feet and pass by. Birds that fly after the little creatures when the waves return after hugging the shore, and again when the waves come back, they too fly back. Really enjoyable view. In the evening the shore became crowded. Mostly families with their children. Rows of vehicles, motorbikes and children with cycles. Children are interested in getting into the quiet seawater. They really enjoy. Most of them are taking photos of the red color of the sun set.

Rocks that become covered by the blanket of darkness, when the sun dip in to the sea. The water birds disappearing into the pine trees and rain forests.

Once more, no, many more times, we should come to this beautiful shore.

Sariga and her friends returned after reinforcing their friendship once again. 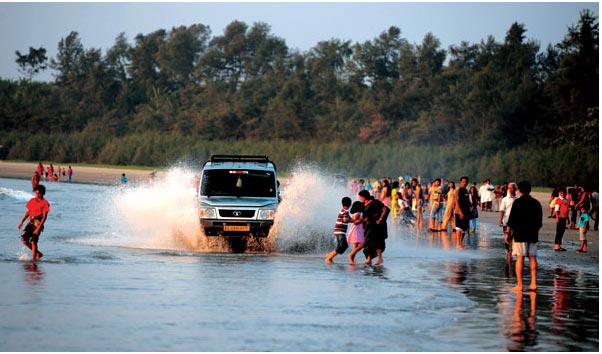 Muzhappilangad shore is like a carpet spread on wet sand. Since the waves keeps on caressing the slightly slanding shore, the sand looks like polished. It never goes down even if you stamp hard. This makes Muzhappilangad favorite for the vehicles. During the low tide, the width of the shore increases, its beauty too. Usually the cars go very slow on the shore that looks likes an eight-track road. Some young boys on the bikes sometimes fly past.

There is police assistance to look in to the safety of the families who comes to spend the evening. When you come to see the shore, the waves seem to call you. The waves that seek the quiet shore. The children will run after the milky surfing waves. Since the sea is very shallow, you can get into it confidently. The elders cannot be as good as the children in those water games. Even then they also will go to feel the touch of waves.

Some native women are digging something from the sand of the shore. They are catching 'Orikka' when they pop their head out of the sand. Orikka' is a cousin of Kallummakkaya' (Mussels). Some of the tourists also filled the available bags with 'Orikka'. The favourite food of the foreign tourists who come to see the shore. The Parasailing organised by the 31 N.C.C battalion reveals another face of the Muzhappilangad beach. The view of the cadets flying under the big cloth umbrella, which flies high with the wind, doubled the enthusiasm of the viewers. 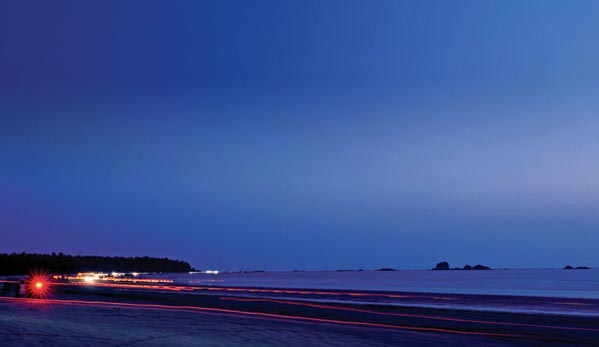 Children looked at their parent's faces, eager to fly. The Adventure academy used to give chances for this type of flying to the public also.

A team from Alappuzha heading to Mukambika reached muzhappilangad. Several times they hesitated. Their doubt was whether the vehicle would ditch in to the sand. After asking several people, eventually they drove in. Muzhappilangad beach is for family and children. To build sand castles and to run along with the waves, come to this place. You can be a witness to the most beautiful evening in Kerala.

There are some other beautiful beaches also in Kannur. Payyambalam, Eazhimala, Meenkunnu, Overbarries Folly and so many other beaches, which tempt the tourists. These beaches are the colourful dreams of the development of tourism in Kannur. Peaceful resting beaches for the tourists too.

Meenpidi Para in Kollam gears up to welcome visitors

Soon visitors can enjoy boating at Thonikkadavu in Kozhikode

The deteriorating historic sculptures near Vembanad lake cry for attention

The neglected Ponganpara and Thampuran museum of Kollam
News in Videos