When we shook hands with the bus driver Jayan and said good-bye to him at the KSRTC bus stand, Pathanamthitta, we felt envious of him, because he drives the bus regularly in this route. Five 'O clock in the morning. The weather in Kumili was very chilly. You can smell the steam of black tea from small shops. When we started sipping the tea, the board we were waiting for appeared at a distance. Pathanamtitta via Gavi. The board was in both Malayalam and Tamil. Thinking that the bus will be crowded, we paid for the tea and ran to the bus. But, , there was no crowd as much as we thought. Only about ten passengers When we shook hands with the bus driver Jayan and said good-bye to him at the KSRTC bus stand, Pathanamthitta, we felt envious of him, because he drives the bus regularly in this route.

Five 'O clock in the morning. The weather in Kumili was very chilly. You can smell the steam of black tea from small shops. When we started sipping the tea, the board we were waiting for appeared at a distance. Pathanamtitta via Gavi. The board was in both Malayalam and Tamil. Thinking that the bus will be crowded, we paid for the tea and ran to the bus. But, , there was no crowd as much as we thought. Only about ten passengers. Most of them were labourers going to Gavi. It is heard that the number of passengers in buses running in that route has increased since the Malayalam movie .'Ordinary' was shot in the back ground of Gavi.

A passenger told us ' To day is a working day, otherwise the bus is crowded on Saturday and Sunday'.

The bus started at 5:30 AM. We reached Vandipperiyar. From there a few bundles of newspaper were loaded in the bus. Then we returned to the main road by the same route..

The road to Gavi through Kannimara estate was in the middle of tea gardens. The narrow road is winding around the tea mountains. You can see the welcome board to the tiger santuary at Vallakadavu. The conductor has to sign at the check post. Two jeeps with foreign tourists started from there. On the way the bus overtook them. Madhu took the photos of the jeeps and the foreign tourists.

While watching the out door views and taking photos, the driver stopped the bus slowly just after a curve. There is an elephant on the hill nearby. A huge face among the trees in the forest. We opened all the shutters which were closed due to rains and cold weather. All the eyes pointed to the windows. Everybody took photos in their mobile phones. Sitting on his seat, driver Jayan was also taking photos in his camera. Looking at the bus and the passengers for a while, the elephant retreated. When the bus moved ahead, we could see a herd of elephants on the hill above. That was beyond the reach of cameras. The fog started covering the forest. There was drizzling also. Camera became more entusiastic. Looking at Madhu who is taking the photos of the amazing scenes of the forest, Paliniyappan commented. 'He is running around to take photos'.

'We people see this every day, they are not like us', a co-passenger replied.

That is right, for the people who see this familiar scenes daily, may be having different feelings. Any how you should experince this at least once in the life time.

A journey like in a dream world. To picturise a dream scene the art directors have to prepare so many details. Smoke, set etc. Here the nature is setting the background. Special effect of the fog. The moist trees and grasslands in the magical circle of fog. Like enjoying a dream with your eyes open.

Since the scenes are very close, the bus is running slowly. The roads coming into view when the fog clears, disappears to somewhere between the green mountains. When you look through the wet wind screen of the bus, you can see the nature like an oil painting. Occasionally the wild plants come in to the bus and brush us, giving a sweet feeling of the moisture on your face.. When the regular passengers protect themselves from this atmosphere by closing all the shutters, the passengers travelling in this route for the first time are enjoying the thrill of this trip.

We reached Gavi. We can see the Eco Tourism Center of Kerala Forest Development Corporation. Gavi is the country of cardamom plantations. And the biodiversity aspects which should be preserved.

We reached Kochupampa. K.S.E.B has a canteen there. The driver parked the bus on a side. Conductor Suresh told us that there will be a ten minutes halt. Aapam, egg curry and black tea. That breakfast was great. From there we got introduced to driver Jayan and conductor Suresh Jayan belongs to Korom, Payyannur. He works at K.S.R.T.C depot, Kumili. All most every day he works in this route. Since he is a nature lover, he enjoys this job very well. When he realised that the photographer is travelling with out a seat, he gave the engine box as a seat to him.
After breakfast we started again. On another curve, when the fog cleared for a while, we saw a herd of bisons in the nearby turf. Another herd on the hill top on the opposite side. Regular passengers do not approve of stopping the bus like this. They were muttering 'Will this bus reach there today?'

We went ahead. At the next sharp bend, there stands a single bison. A huge one with wide horns. Looking at the bus and the cameras, eating grass, walking idly and taking his own time he moved away. Slowly we also moved. After a short distance we saw another herd. But seeing the bus, they fled. 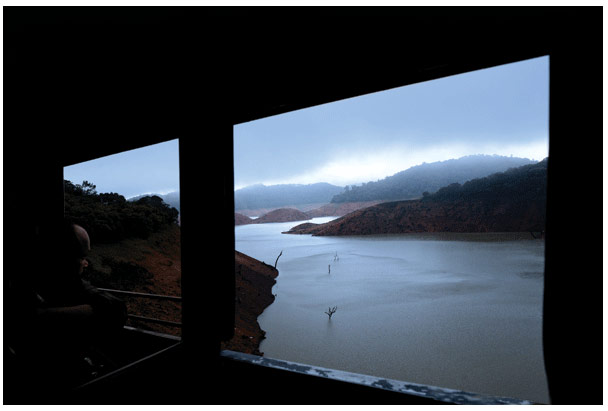 A strong rotten smell came in to the bus. Passengers covered their noses. 'The smell is from a bison which was killed by a tiger'. One of the regular passengers told us.

Now we can see the Aanathodu dam. The water level is very low. They say that water has reached such low level after a long time. You can see the logs and roots of the trees which were destroyed when the dam was constructed. A clear evidence of destruction of forest. It will be a good if the people who demanded dams at Silent valley and Athirappali would come and see this. The small streams coming from the forest are trying their maximum to bring water to the dam. Those streams become small water falls beautifyng the area.

When the fog clears in the wind, you get a clear view of the dam. The bus crossed to the other bank over the dam. Occasionally you can see the dam in the depth like a scenary. Next scene is the Kakki dam.. The reservoir is very vast, spread over in the gorges.

The photographer who allready had more than two hundred photos in his camera is not yet satisfied. This not a journey. It is much more than that. Madhu certified.

The story changes when you pass Angamuzhi via Moozhiyar, Kakkad and Kochandi. Now you can see houses and inhabited areas.. Instead of bisons, country buffalos and in place of forest there are rubber plantations. Veiled rambuttan trees in house plots. To protect the rambuttan fruits from birds, the trees are covered with nets. Where are the forest trees which give all their fruits to the birds? And what about the trees which are grown here for comercial purposes. Chittar, Perunaadu, Vadasserikkaraâ€¦..more pictures of country life are coming up. Now we can see a dream with our eyes closed. A return trip in your nind to that journey we left behind.

100 km a day; A Bhutan cycle trip from Kerala within 6 months is Jithu's aim

How differently abled friendly is our tourism sector?
News in Videos