Palakkad is the land of Palmyras and Paddy fields. It is the chief granary of Kerala, often called the Gateway of Kerala. Palakkad lies at the foot of the gigantic Western ghats on the border of Kerala. This district with mountains, forests and fertile valleys, rivers and mountains streams are rich... 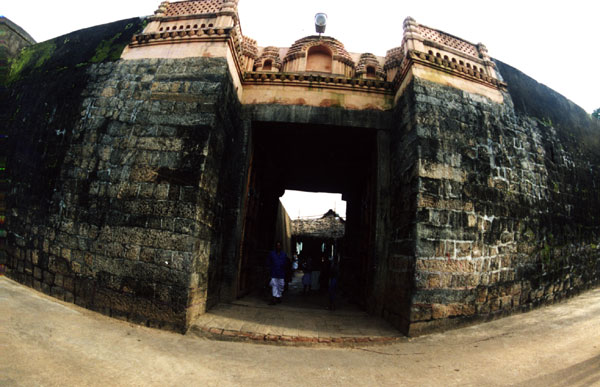 Palakkad is the land of Palmyras and Paddy fields. It is the chief granary of Kerala, often called the Gateway of Kerala. Palakkad lies at the foot of the gigantic Western ghats on the border of Kerala. This district with mountains, forests and fertile valleys, rivers and mountains streams are rich in flora and fauna. Palakkad is known for its historical background and the remnants of Tippu Sulthan's Fort are still maintained. The famous tourist spot of Malampuzha is situated just 8km away from Palakkad Town.


There are many views on how Palakkad (or 'Palghat' the anglicised version) got its name. One view is that the word 'Pala' (barren land) together with 'Kadu' (jungle) gave the land its name. Yet others believe that it is connected with the ancient Jain temple in the town: 'Pali' being the sacred language of the Jains, giving the land its name as 'Palighat', which over the years changed to Palakkad. However, most believe that Palakkad is derived from 'Pala', an indigenous tree which once densely occupied the land, and hence Palakkad or 'the forest of Pala trees.'

Not much is known about Palakkad's ancient history. It dates back to the Paleolithic period, and several megalithic relics have been found in the region. At the turn of the first millenium AD, for several hundred years the Perumals ruled the land. Later their governors called Utayavars took possession of this land and divided it among themselves. William Logan, the Scottish author of the celebrated Malabar Manual, suggests that one of the hubs of the Pallavas of Kanchi who invaded Malabar in the second and third centuries was Palakkad.

One of the earliest records about Palakkad has a chronicle of a war victory in A.D 988 when the king of Palakkad, Nedumpurayur Nadudayavar, stopped an invasion by the forces of the King of Kongunadu at Chittur. Even today, a festival is celebrated in memory of this victory at Chittur. The Nedumpurayur royal family was later known as Tarur Swaroopam and finally as Palakkad Raja Swaroopam.

In 1757, to check the invasion of the Zamorin of Calicut, the Raja of Palakkad sought the help of Hyder Ali of Mysore, who freed all parts of Palakkad invaded by the Zamorin. Eventually, Haider helped himself to Palakkad and later his son Tipu Sultan was the unquestioned ruler of this region. But after his defeat to the British, Tipu ceded all his Malabar territories to the British following the treaty with the English East India Company in 1872. Palakkad formed part of the Malabar District of the Madras Presidency thereafter.


Located between north latitude 10Â° 46' and 10Â° 59' and East longitude 76Â° 28'and 76Â° 39', Palakkad district shares borders with Malappuram district in the North and Northwest, Trichur in the South and Coimbatore district of Tamil Nadu in the East. Sprawling over the midland-plains and mountainous highlands, the district does not have a coastline. The midland plains are at an altitude of 10 m to 80 m above sea level and highlands are 914 m to 2133 m above sea level. The 32 to 40 km wide Palakkad pass in the 960 km long Western Ghats is of immense geographic importance. On either side of this natural gap are the vast Nilgiri Hills and the colossal Anamalai ranges. Dense reserve forests are found in the Palakkad and Chittur taluks of the district. Palakkad division is further divided into Mannarkkad East Range, Mannarkkad West Range, Olavakkode Range and Palakkad Range. The highest peak is the 2386.14 m high Anjinad. The other major peaks include Karimala, Karimala Gopuram, Kalladikkode, Nellikkotta or Padagiri and Vellachimudi.
The major rivers are Bharathapuzha (Nila), Kollengode, Kannadi, Kalpathy, Chitturpuzha, Bhavani, Shiruvani, Thuthapuzha and Gayatri. The district has some key irrigation projects and dams at Malampuzha, Walayar, Mangalam, Gayatri, Chittur, Meenkara, Pothundi and Kanhirapuzha. Malampuzha Dam irrigates over 20,000 hectares of farming land while Chittur Irrigation Project covers over 18,000 hectares and Kanhirapuzha project waters over 10,000 hectares.

Palakkad, branded as the rice-bowl of Kerala, has fertile plains where substantial quantities of rice are produced by scientific cultivation methods. Groundnut, black gram, coconut, cotton, ragi, pepper, banana, cashew, sugarcane and pea add in to the roll of other major crops. Sugar Cane is grown extensively in the Chittur taluk. Around 284 lakh hectares of the district (64 % of geographical area) is used for farming and some key agricultural institutions of Kerala including Regional Agricultural Research Station, Soil Testing Laboratory, Fertilizer Quality Control Laboratory, Mushroom Laboratory and Agricultural Engineering Workshop are located at Palakkad.


Palakkad has a vivid cultural tradition. Thunjathu Ramanujam Ezhuthachan, widely accepted as the father of Malayalam literature spent his last days at Chittur in this district. Kunjan Nambiar the most famous of all Malayalm poets and the founder of thullal , a purely Kerala art form, was born in a small village in this district. Many other noted exponents of varied art forms like Chakkiar Koothu, Kathakali, Thullal etc.. which are intrinsically Kerala art forms, found encouragement and inspiration at Palakkad. Most noted of all perhaps is the exponent of Carnatic Music late Sri Chembai vaidyanatha Bhagawathar. Likewise Palakkad Mani Iyer was known the world over for his mastery over the mridangam, the drum so central to Carnatic music.


Kalpathy Viswanatha swamy temple is the oldest Siva temple in Malabar. It was build around 1425 AD. by Kombi Achan, the then Raja of Palakkad. Kalpathy Car Festival is based on vedic Tamil Brahmin culture. The main centre of the festival is Kalpathy Sree Viswanathaswamy temple.


Manappullikavu Vela is a major festival held every year at the Manappullikkavu Bhagavathy Temple. It is believed that the temple is about 1200 years old. It is different from other Bhagavathy Temples by way of rites and rituals. Namboodiries, that is, the Kerala Brahmins perform the daily rituals according to tantric traditions. Both Saiva and Vaishnava traditions are observed in the poojas.


Nenmara-Vallengi Vela is a renowned festival of Palakkad attracting people from far and wide. It is held annually on the Pooram day of the Malayalam month Meenam. The Festival starts with the hoisting the sacred flag.


Tradition says that one 'Singamanan' the ruler of Ramapattinam Zamin, West of Pollachi, waged war on Chittur on the pretension that the people of Chittur and Pattanchery had stolen like silver, muslin etc .from Tamil merchants. In the war, people of Chittur who were not familiar with the warfare were faced with defeat and finally with the help of the Bhagavathy, the female deity of the place, were able to inflict a crushing defeat. The leader of the Kongu army was slain in the battle. As a gratitude to the Bhagavathy, the people decided to celebrate the victorious day every year in the name at this temple and the festival was born.


One of the few existing Jain temples in Kerala is the Jain temple at Jainmedu, near Palakkad town. According to legend, one sutar (head of the Jains) built this temple 500 years ago for the Jain sage, Chandranathaswami. The Jain who came here from Mysore fled from this place during the invasion of Tipu Sultan. This temple comprises four divisions and is 32 feet high and 20 feet wide


Ottappalam Nercha Festival held in the month of January - February and is celebrated to commemorate the death of saint Uthaman Auliya. An important ritual of this Festival is the distribution of food prepared during the festival to the poor.


Pooram at Sree Chenakkathoor Bhagavathy temple. Grand procession of caparisoned elephants. Panchavadyam, lot of village folk forms - Poothan, Thira, Andivedan, Kumbhamkali, Kavadiyattom etc.- are performed. Kuthiravela and Kaalavela - processions of decorated motifs of Kuthira (horse) and Kaala (bull) by devotees and brought to the temple ceremoniously - are also be held. Magnificent fire works in the evening and mid-night is another attraction. Tholppavakoothu, the shadow puppet play is presented here as a ritual on everyday for seventeen days preceding to the festival. At Palappurum, 5kms from Ottappalam in Palakkad district.


The main event of this festivals is Aarattu. The same is performed 21 times, in a sequence of one in the morning and one in the evening, for ten days and the final Aarattu on the eleventh day. Tenth day (26th) night is Pallivetta. On the pooram day mid night there is a ceremonial meeting between Valluvakkonathiri, the king of the earst while kingdom, and Malayankutty, the head of Pana community who comes to the pooram ground on a palanquin. It is known as Panante Varavu. This commemorates the religious harmony and the help rendered by the tribal headman to the Raja in by gone days. The twelfth day, from morning to evening there will be a performance of folk from chavittukali. Ottanthullal, Paadhakom, Chakyarkouth, Nagyarkouth, Kathakali, Thayambaka, Melam, cultural programmes etc. are performed during the festival days. Kalamezhuthum Pattum a ritual folk from of drawing Badrakali using natural colours accompanied by songs, is offered by the devotees every day till pooram being. Located at Angadippuram on Kozhikode - Palakkad highway and very near to Perinthalmanna. From Shornur Nilambur local train stops at Angadippuram railway station. 27kms from Pattambi railway station.