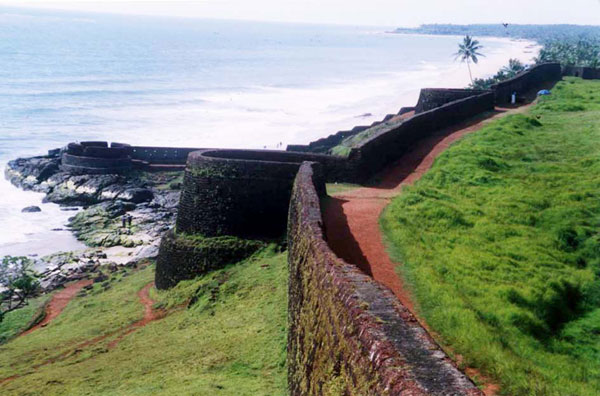 There are different views on the derivation of the name 'KASARAGOD'. One view is that it is the combination of two Sanskrit words kaasaara (which means lake or pond) and kroda (which means a place where treasure is kept). Another view is that it is the place where Kaasaraka trees (Strychnos nux vomica or Kaanjiram or Kaaraskara) are in abundance. Bothe views are relavant as there are large number of rivers, lakes and ponds in the coastal belt of the district besides thick flora consisting of innumerable varieties of trees, shribs etc. particularly plentitude of Kaasaraka trees.


Lying on the north western coast of the State, Kasargod was famous from time immemorial. Many Arab travellers, who came to Kerala between 9th and 14th centuries A.D., visited Kasargod as it was then an important trade centre. They called this area Harkwillia. Mr.Barbose, the Portuguese traveller,who visited Kumbla near Kasargod in 1514, had recorded that rice was exported to Male Island whence coir was imported. Dr.Fracis Buccanan, who was the family doctor of Lord Wellesly, visited Kasargod in 1800. In his travelogue, he has included information on the political and communal set-up in places like Athiparamba, Kavvai, Nileshwar, Bekkal, Chandragiri and Manjeshwar.

Kasargod was part of the Kumbala Kingdom in which there were 64 Tulu and Malayalam villages.

When Vijayanagar empire attacked Kasargod, it was ruled by the Kolathiri king who had Nileswar as his headquarters. It is said that the characters appearing in Theyyam, the ritualistic folk dance of northern Kerala, represent those who had helped king Kolathiri fight against the attack of the Vijayanagar empire.

During the decline of that empire in the 14 century, the administration of this area was vested with the Ikkeri Naikans. They continued to be the rulers till the fall of the Vijayanagar empire in 16th century. Then Vengappa Naik declared independence to Ikkeri.

In 1645 Sivappa Naik took the reins and transferred the capital to Bednoor. Thus they came to be known as Bendoor Naiks. Chandragiri fort and Bekkal fort are considered to be part of a chain of forts constructed by Sivappa Naik for the defense of the kingdom.

In 1763 Hyder Ali of Mysore conquered Bednoor and his intention was to capture entire Kerala. But when his attempt to conquer Thalassery Fort was foiled,
Hyder Ali returned to Mysore and died there in 1782. His son, Tippu Sulthan, continued the attack and conquered Malabar. As per the Sreerangapattanam treaty of 1792, Tippu surrendered Malabar except Tulunadu (Canara) to the British.

The British got Canara only after the death of Tippu Sulthan in 1799. Kasargod was part of Bekal taluk in the South Canara district of Bombay presidency. Kasargod taluk came into being when Bekal taluk was included in the Madras presidency on April 16, 1882. Though Vengayil Kunhiraman Nayanar moved a resolution in 1913 on the floor of Madras Governor's Council demanding the merger of Kasargod taluk with the Malabar district, it had to be withdrawn because of the stiff opposition of the members from Karnataka. In 1927,a political convention held at Kozhikode, passed a resolution stressing the above demand.

In the same year, an organisation titled Malayalee Seva Sangham was constituted. Thanks to the efforts made by many eminent persons like K.P.Keshva Menon, Kasargod became part of Kerala following the reorganisation of states and formation of Kerala in November 1,1956.


The diversity of the physical features results in a corresponding diversity of climate. The climate of the district is classified as warm, humid and tropical. The average maximum temperature is 31.2oC and minimum is 23.6oC. Though the mean maximum temperature is only around 90oF, the heat is oppressive in the moisture laden atmosphere of the plains.
Humidity is very high and rises to about 90 percent during the south-west monsoon. The annual variation of temperature is small, the diurnal range is only about 10oF.


The mean annual rainfall of the district is 3581mm, which is highest in the state. (The state average is 3063). The south west monsoon starts towards the end of May or the beginning of June, heralded by thunder-storms and hold till September when the monsoon fades out. October-November brings the north-east monsoon. Out of the total rainfall, the months June, July & August experience 2/3 of the quantity. Rainfall during the year 2001 in mm. Total Rainfall - 3626 mm.


Dry weather from December to February. March to May is the hot season. The coolest months of the year are January-February.


The district is marked off from the adjoining areas outside the State by the Western Ghats which run parallel to the sea and constitute an almost continuous mountain wall on the eastern side. The Ghats dominate the topography. The coastline is fringed with low cliffs alternating with stretches of sand. A few miles to the interior, the scene changes and the sand level rises towards the barrier of the Ghats and transforms into low red laterite hills interspersed with paddy fields and coconut gardens.

Based on physical features, the District falls in to three natural division. The low land, bordering the sea, the mid land consisting of the undulating country and the forest, clad high land on the extreme east. There are mainly four types of soils namely, sandy, sand loam, laterite and hill or forest soil. The sandy and the sandy loam soils exist as a continuous narrow belt all along the Western coast about 20 Kms in width.

The land of the district can be categorized in detail as follows.


There are 12 rivers in this district.

The longest is Chandragiri (105 kms) originating from Pattimala in Coorg and embraces the sea at Thalangara, near Kasargod. The river assumes its name Chandragiri from the name of the place of its source Chandragupta Vasti; where the great Maurya emperor Chandragupta is believed to have spent his last days as a sage.

The second longest river is Kariankod (64 kms), across which a dam is being built at Kakkadavu.