Kannur district derived its name from the location of its headquarters at Kannur town.The old name 'Cannanore' is the anglicised form of the Malayalam word Kannur. According to one opinion, 'Kannur' is a derivation from Kanathur, an ancient village, the name of which survives even today in one of... 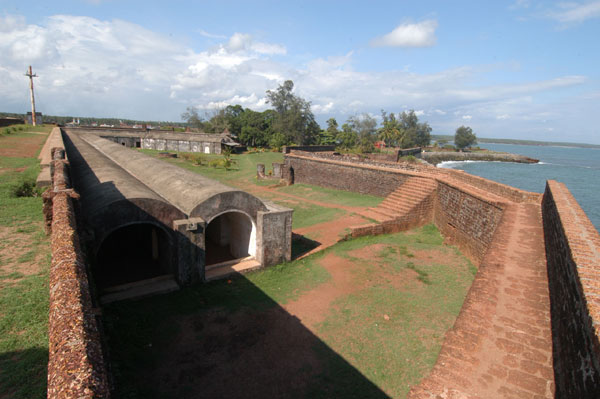 Kannur district derived its name from the location of its headquarters at Kannur town.The old name 'Cannanore' is the anglicised form of the Malayalam word Kannur. According to one opinion, 'Kannur' is a derivation from Kanathur, an ancient village, the name of which survives even today in one of the wards of Kannur Municipality.Anotherversion is that Kannur might have assumed its name from one of the , deities of the Hindu pantheon, a compound of two words, Kannan (Lord Krishna) and Ur (place)making it the placeof Lord Krishna. In this context, it is worth mentioning that the deity of the Katalayi Sreekrishna temple was originally installed in a shrine at Katalayi Kotta in the south eastern part of the present Kannur town.


Kannur district lies between latitudes 11Â° 40' to 12Â° 48' North and longitudes 74Â° 52' to 76Â° 07' East. The district is bound by the Western Ghats in the East (Coorg district of Karnataka State), Kozhikkode and Wayanad districts, in the South, Lakshadeep sea in the West and Kasaragod, the northern most district of Kerala, in the North.The district can be divided into three geographical regions - highlands, midlands and lowlands.The highland region comprises mainly of mountains. This is the area of major plantations like coffee, rubber, tea, cardamom and other spices. Timber trees like teak, veetty, etc are grown in plenty in this region.The midland region, lying between the mountains and the low lands, is made up ofundulating hills and valleys. This is an area of intense agricultural activity.The lowland is comparatively narrow and comprises of rivers, deltas and seashore. This is a region of coconut and paddy cultivation.

The district has a humid climate with an oppressive hot season from March to the end of May. This is followed by the South-West monsoon which, continues till the end of September. October and November formflthe post-monsoon or retreating monsoon season. The North East monsoon which follows, extends upto the end of February, although the rain generally ceases after December.During the months of April and May, the mean daily maximum temperature is about 35Â° celsius. Temperature is low in December and January -about 200 celsius. On certain days the night temperature may go down to 16Â° celsius.The annual average rainfall is 3438 mm and more than 80 percent of it occurs during the period of South -West monsoon. The rainfall during July is very heavy and the district receives 68 per cent of the annual rainfall during this season.

Kannur district is very rich in vegetation. Natural vegetation, I except in some coasta1.regions, consists of different types offorests. But, I' in spite of generally favourable climatic conditions, vegetation is not , j uniform. In restricted regions, with their own micro climate or special , ( I' edaphic features, plant formations assume different characters. Thus, I plant communities, ranging from psammophytes and mangroves to r evergreen forests are seen in this district The coastal region is a comparatively narrow zone, characterised by secondary soil which is rather loose and sandy. The serile sandy tract supports only a poor vegetation of the psammophyte type. Plants are few and mostly prostrate. Erect species are small and short. Owing to very poor water holding capacity of the soil, these plants are provided with special xerophytic adaptations. Another conspicuous feature of this area is the mangrove vegetation, found at the estuaries of rivers and backwaters, and often extending to the interior along their banks. Human interference has much changed the vegetation of the coastal region. Major part of the district comes under midland region with numerous hills and dales and it presents an undulating surface gradually ascending and merging into the slopes of Western Ghats. Soil is secondary and lateritic with underlying rock of laterite or disintegrated greiss. T.epical flora of this area is a most deciduous forest consisting of a mixture of evergreen and deciduous trees. Undergrowth consists of a variety of annuals and perennials. The mountains are a continuation of the midland region, gradually ascending to the main ridge of the Western Ghats. Soil in the western slopes is a ferrugenous red, sandy loam. Vegetation over the whole area is of the forest type. Irregular distribution of teak, localised areas of bamboo dominanace, change of good quality forest into open grass lands, etc are characteristic.

The geological formations in the district are of Archean and recent age. Archean formations comprise of greisses and charrockiates. ! Recent formations are alluvium and laterite. Archeans occupy the midland and highland regions of the district having rock types of basic charrockiates and hornblende-biotite greiss. The remaining portions in the coastal area are covered by laterite, alluvium, lime-sheUs, lignified woods, etc. Archean formations like foliated horn-blende-biotite greiss (gray or white in colour) is one of the main rock types in the northern portion of the district. Recent formations like laterite is developed on a limited scale along the coastal areas.


The tourism potential for Kannur district is high. The St. Angelos Fort in the Kannur Cantonment, which was constructed in 1505, is a symbol of Portuguese architecture and attracts plenty of tourists. The Thalassery Fort is an important tourist centre. Kannur beach and Ezhimala are known for scenic beauty. Places of historic importance, like the house of
Gulldert, who composed the first Malayalm- English Dictionary and the mosque at Madayi
constructed in 1124, using marble brought from Mecca attract many tourists.


Fort St. Angelos is in the west of Kannur town. It was built in 1505 by the first Portuguese Viceroy, Don Francisco De Almeida, with the permission of the Kolathiris, on a promontory jutting into the Lakshadweep sea. The Dutch captured the fort in 1663 and sold it to the Ali Raja of Kannur in 1772 and in 1790 it came into the possession of the British. The British rebuilt it and made it their most important station in Malabar . This fort is in a fairly good state of preservation, though parts of it have collapsed. A few obsolete guns areseeh at the place. The fort is a protected monument under the Archaeological Survey of India.


The British arrived in Thalassery in 1683 and errected a goods shed there. They shifted their ommercial capital to Thalassery from Kozhikkode, following obstruction from the Dutch. In 1700, the British built the Thalassery Fort on a small hill called Tiruvellapadkunnu and in 1708, it was strengthened by increasing its height and with bastions. The fort is square structure built of laterite and is distinguished by its massiv ventilated walls and strong flanking bastions. It was here that Raider' captain was imprisoned.The famous St. John's Anglican church is behind this fort.

Black rocks protect this long ,clean beach from the currents of the deep, making it shallows waters a swimmer's paradise.Perhaps this is Keralas only drive- in beach. Where you can drive entire length of 4 K.m .


The Payyambalam beach is one of the beautiful beaches in this State and is an ideal place to spend evenings, irrespepcti ve of seasons. It is very near Kannur town. ,The mortal remains or' Swadeshabhimani Ramakrishna Pilla, A.K. Gopalan, K.P. Gopalan, Pamban Madhavan and K.G. Marar are laid to rest near this resort.


Ezhimala, the capital of the ancient Mooshika kings, is considered to be an ancient historical site. It is a onspicuous,isolated cluster of hills, forming a promontory, 38 kms. north of Kannur.

A flouriIshing sea port and centre of trade in ancient Kerala, it was one of the major battle fields of the Chola-Chera war of the II th century .I It is believed that Lord Budha had visited Ezhimala. An old mosque, believed to contain the mortal remains of Shaikh Abdul Latif, a Muslim retormlst, is also located here. The hill is noted for rare medicinal herbs. Bordered by sea on three sides, Ezhimala is set to occupy a prominent place in the naval history of the country, consequent to the proposal for ommissioning the N.aval Academy here.


( 29 K.M from Kannur) : This renowned centre for arts and culture at New Mahe conduct courses in painting, sclpture,music, dance and pottery


(37K.M. east of kannur ) : An ideal retreat for rourists ,the damsite is famous for its scenic beauty. The D.T.P.C provides pleasure boating faciliaties at the reservoir. Accommodation is available at the Project Inspection Bungalow and its dormitories.


( 65 km from Kannur Town ): This enchanting hill station ,situated 4,500 ft. above sea level near the Kerala - Karnataka border ,is rich in flora and fauna. It is a 6 km trek to the top of the hills.


(20.K.M.from Kannur, near Thalasseri twon on the national high way at Illikunnu):Dr; Herman Gundert ,the revered German Missionary, scholar,lexicographer lived in this bungalow for 20 years from 1839.It was here that one of the first malayalam dictionaries and the first malayalam newspaper Rajyasamacharam took shape.


The Snake Park at Parassinikkadavu is situated 18 kms. Away from Kannur town. It Is one of the known snake parks in the country . The park is dedicated to the preservation and conservation of snakes, most of which are becoming extinct gradually. There is a large collection of poisonous and non-poisonous snakes.


Moppila Bay is a natural fishing harbour, lying near Fort St. Angelos. A sea wall projecting from the fort separates the rough sea and inland water. The bay was famous during the Kolathiris' regime as a commercial harbour that linked Kolathunadu with Lakshadweep and foreign countriea, in imports. Today , Mopilla bay has turned into a modernised fishing harbour, developed under the Indo-Norwegian Pact.