The City of Colours

Everything in Sikkim has intense colours. The orchid flowers and fruits in colours strewn around generously, the ubiquitous Buddhist monasteries and the flags and festoons written with Buddhist prayers in numerous colours all have intense colours like the plump cheeks of the Sikkimites. The colour of the Teesta River, you start to see as you go to the capital Gangtok from Siliguri via Kalimpong is dark blue. Kangchenjunga (Kanchenjunga), the third highest peak, seen prominently from the heights of Gangtok has a soft milky white hue whole day. During the sunrise and sunset it wou

You can touch China from India: Gangtok to Nathula pass. 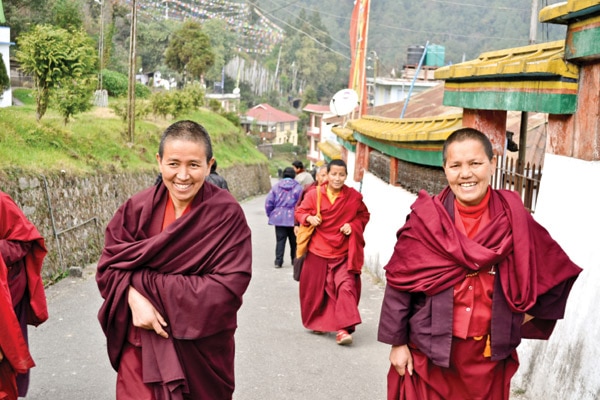 Everything in Sikkim has intense colours. The orchid flowers and fruits in colours strewn around generously, the ubiquitous Buddhist monasteries and the flags and festoons written with Buddhist prayers in numerous colours all have intense colours like the plump cheeks of the Sikkimites. The colour of the Teesta River, you start to see as you go to the capital Gangtok from Siliguri via Kalimpong is dark blue. Kangchenjunga (Kanchenjunga), the third highest peak, seen prominently from the heights of Gangtok has a soft milky white hue whole day. During the sunrise and sunset it would don different hues of red like flames.

Albeit being one of the smaller states of India, it is rich with natural beauty and archaic cultural heritage and a weather cloaking with a cool atmosphere even in summer. This place in the lap of Himalaya sharing its border with Bhutan, Nepal and China, is geologically and strategically a very important place. Having been reined by kings for a long time and never come under the direct rule of the British, Sikkim still has the ancient cultural heritage, a state with deep roots of Buddhism. 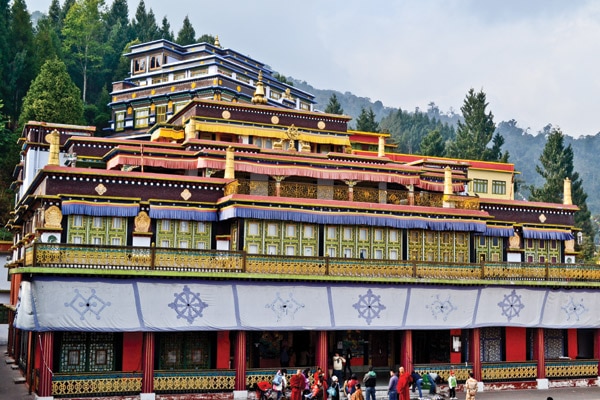 Gangtok, the capital of Sikkim, is a city abundant with beautiful clean roads; the main road being M.G. Road. When you go to the M.G. Road in the evening it may seem as if you were in a small European town. With the vehicle traffic completely prohibited, there are shops on both sides of the road. It abounds in shops with fancy articles to attract tourists, hotels serving foods of different tastes and cuisines, bakeries, ice-cream parlours, etc. befitting a tourist centre. There are also shops selling different kinds of Momos, a very popular dish in north-eastern states. Momos are prepared with chopped vegetables or meat placed in light and soft spreads of dough made of wheat flour (bleached white, called Maida), enwrapped and made in to balls in a typical style by hand and steamed. Taken with a slightly pungent pepper chutney, it is a typically tasty dish. Under beautiful street lights, chairs surrounded with potted plants with flowers in bloom are arranged for travellers and tourists. Enjoying the soft music coming through the loud speakers, you can drift along with the tourists dancing to the music.

From Tashi, the 6000 foot high view point, a little away from the town you can see the distant view of Sikkim and the enchanting far off view of Himalaya mountain range. Close to this view point is a Hanuman temple. There is also a ropeway to enjoy the aerial view of Gangtok. Although the ride by the ropeway of one kilometre is of only seven minutes, the view is unforgettable. 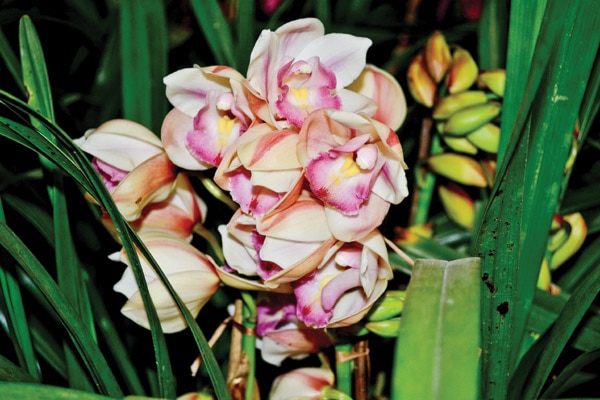 The orchids in Sikkim are famous for their colours and variety. In Gangtok there is also a permanent exhibition displaying hundreds of orchids. Another attraction in Gangtok is the Himalayan Zoological Park. Although it is small, several Himalayan animals are bred here in conditions akin to nature. The main variety of animals here are the very rare snow leopard, Himalayan bear, red panda and Himalayan wolfs.

Sikkim is famous for Buddhist monasteries. You can see flags in different colours hung along the road sides. They believe that the Buddhist prayers go up in the sky. Nangyal Institute of Tibetology in Gangtok is one of the large study centres for Buddhism in the world. In this institute, there is an invaluable collection of books, manuscripts and gadgets for prayers related to Buddhism. The big column like 'sthoopa' structure called Do-drul Chorten is located at another side of the town. This was built by Trulshik Rimpoche, the head of Nyingma order, in 1945. There are 108 wheels inscribed with Buddhist prayers around the golden coloured column at the centre of a raised base structure made of cement. You can see Lamas walking around this 'sthoopa' rotating prayer wheels. 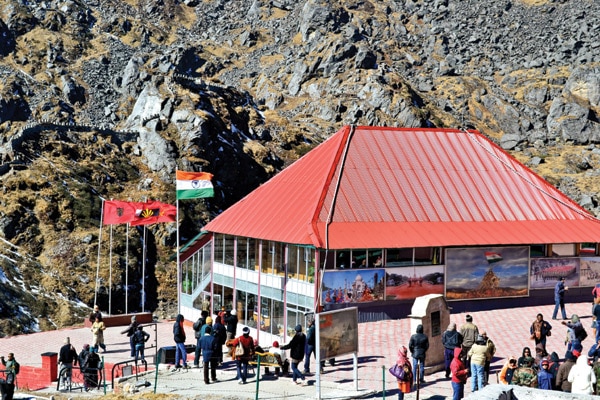 One of the largest Buddhist monasteries in Sikkim is Rumtek monastery. The 24 kilometer trip from Gangtok to Rumtek gives you the first-hand view of the beautiful Sikkim villages. You can see cultivation on the terraces cut out on the slopes of the hills. This 300 year old monastery is one of the main monasteries of the Kashyapa order â€“ one of the four main orders of Buddhism. This is built modelled on their centre in Tibet. There is a rare collection of books on Buddhism in this multi-storied building built in the archaic style. At the centre of the square, seen on entering through the tall door in front, there is a column with inscriptions of Buddhist prayers. Passing by that, you will reach the main prayer hall below. The visitors are allowed only up to that place. There are small buildings also adjacent to the main building. The monastery has an enchanting look with its unique architecture, colourfully inscribed pillars, painted doors and windows, decorated columns and the carpets and the curtains in different colors and designs, Outside, we saw some Buddhist monks come as visitors. In the recent earthquake, the monastery suffered some minor damages.

Once in Gangtok, it is irresistible to have a trip through Nathula Pass on the border between India and China. The 56 kilometer road at an altitude of 14450 feet is one of the highest trafficable roads in the world. It is completely under the control of military. One has to apply in advance and secure the permit to visit the Pass. Since there are chances of avalanches, sudden changes in the weather and occasional landslides, the tourists are allowed only if the weather is conducive. The journey through the Himalayan Mountains is really a little dreadful. Since the weather could change suddenly, the tourists are not allowed to start their journey after 11 o' clock in the morning. Going forward, you would feel the change in the geological features compared to that at the start. The alpine trees seen initially seem to give way to small plants. The nature of most of the terrain is filled with large black rocks and occasionally covered with snow. Just before, Nathula there is a big lake called Songmo. During the winter the water in this lake would be frozen completely. Ascending a steep beyond the lake, the vehicle would be stopped; thereafter for half a kilometer only walking. On the top of the hill range at the border in front of us, sentry posts with walls like a fort have been set up at intervals. The area where the visitors are permitted is separated out with barbed wire fencing. There is one building each on either side in the two countries. You can see soldiers on ever alert on both sides. Beyond that there is vast range of rocky hills. Among them we could see only one hill covered with snow - a moment when we felt appreciation and respect for our soldiers braving all the adverse conditions and guarding the border even in that bitter cold weather with the wind blowing at a height where oxygen level is very low. 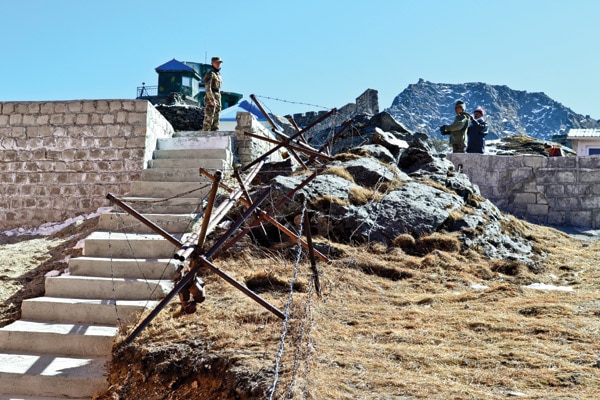 Kangchenjunga is an invisible presence everywhere in Sikkim. From several tourist centers in Sikkim, Kangchenjunga can be seen. But, if you want to see Kangchenjunga closer, you have to go to Pelling in western Sikkim. The 125 kilometer journey to Pelling from Gangtok is through an area of immense visual beauty. You can see orange plantations throughout the journey. Occasionally you can see children selling oranges heaped on the road sides. Pelling is a small town. Most of the hotels are built in such a way as to see Kangchenjunga. The Kangchenjunga seen from here is very enchanting. Till 1814, the capital of Sikkim kings was in Pelling. You can still see the remnants of the palace there. Pemayangtse monastery, one of the oldest in Sikkim, is on a hill of immense natural beauty, a little far away from the town. Looking from this large monastery built with wood, you can see the vast rows of mountains covered with snow.

One can go away from Sikkim only with the unforgettable memories lingering; so uniquely diversified are the sights at each part of Sikkim. 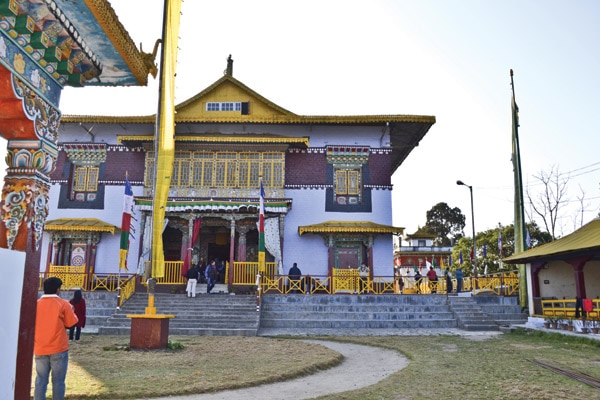 
By Road: NH 31A connects Gangtok with Siliguri (West Bengal). Regular bus services operated by S.N.T. and adequate number of private buses, jeeps and taxies are available from morning to evening at reasonable rate.
By Rail: New Jalpaiguri (125 Km) and Siliguri (114 Km)
By Air: Bagdogra Airport of West Bengal-124 Km.

Sikkim Helicopter Service: Sikkim Tourism operates the Sikkim Helicopter Service from Gangtok to Bagdogra Airport and back. The five-seater Helicopter offers an exclusive mode of transport to see Sikkim from an entirely new view. It also conducts special mountain flights. Come and see the majesty of the Himalayan peaks including Mount Khanchendzonga, Mount Siniolchu, Valley of Flowers, Yumthang, Gangtok and many of the most beautiful peaks in the entire Himalayan range.