Pretty village in the movie

On the way to Sundarapandiapuram we saw a man like Ugalaprasadan who is planting flowers to beautify the inside of jungles in the novel 'Aranyaka' written by Bibhutibhushan Bandyopadhyay. When we traveled 15 minutes from Tenkasi, Sundarapandiapuram started showing its beauty. The sky looked like blue silk. There were overflowing crusts on both sides of the road. Green clad paddy fields. Plantations of sunflowers. Palm groves. Rotating windmills. Among these all you can see lonely palm trees here and there. Beyond that there are small rows of hills. Browsing goats and cattle in the bushes. Now a 'davani' clad girl wearing jasmine flowers on

On the way to Sundarapandiapuram we saw a man like Ugalaprasadan who is planting flowers to beautify the inside of jungles in the novel 'Aranyaka' written by Bibhutibhushan Bandyopadhyay.

When we traveled 15 minutes from Tenkasi, Sundarapandiapuram started showing its beauty. The sky looked like blue silk. There were overflowing crusts on both sides of the road. Green clad paddy fields. Plantations of sunflowers. Palm groves. Rotating windmills. Among these all you can see lonely palm trees here and there. Beyond that there are small rows of hills. Browsing goats and cattle in the bushes. Now a 'davani' clad girl wearing jasmine flowers on her hair is also needed here. Enjoying the tune of Ilayaraja she should hug a little lamb and kiss it. With romance in the eyes she will recite poem. An enchanting village view, which we have seen in many Tamil movies.

About four kilometers before we reach Sundarapandiapuram town, you can see a lot of rocks on the right side. This is called 'Annyan Para'. Its old name was 'Puliyur Para'. The popular Tamil song 'Randaka randaka' in Shanker's Tamil movie 'Annyan' staring Vikram and Sada was picturised on this rocks along with hundreds of co-dancers. Because of that, this rock became 'Annyan Para' 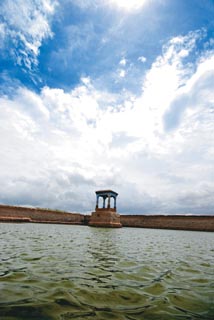 This 'Annyan' stands like an open-air theatre in the middle of vast paddy fields. A flat rock facing the paddy fields could be seen. Nearby there are tall rocks like peacocks. On these rocks, the pictures of M.G.R, Rajni and Kamalahasan were drawn for this song scene. These rocks and the roads were painted with different colors like a dream for this movie. Most of the paintings are intact till now. Standing in this eternity, anybody will become dolls without even hearing starts and cuts. In the beauty of the nature we will start the beats for the song 'Andakkakka kondakkarikk, eyrameen kannukarikku, poovaloru podu poottu randakka randakka'.

We could see a shadow of the tree on the shore of the over flowing Puliyoorkulam (pond). A banyan tree and a peepul tree touching each other. Nearby there is a small banyan tree of which the branches are started growing. There was a small hut made of palm leaves. He told his name when we asked. Chudalapandi Thevar. He weaves palm leaves for roofing and sells it for living. Thirty or forty rupees income per day. It was written on a tin sheet which was fixed on the banyan tree 'Chudalapandi Thaevar vecha maram. Varkkudiya makkal pathukakkanam. (The people who come here should preserve this tree). All trees here are grown up by Thevar. Etukkake? (For what?) I asked. Tanalukku (For shadow). Thevar replied. The sunlight diluted by the banyan trees has a special beauty.

There were no flowers in Saraswateevanam (Saraswati forest). So Yugalaprasadan planted flower plants. There were no shadows on the shore of Puliyoorkulam. So they planted shadow trees. We felt that the movie artists who gave new legend to the rocks and Chudalapandi Thevar who gave shadows to the path have the same mind. Creativity for changing over the places. Thevar claims that he is the watchman of these rocks pond and the paddy fields. We continued our journey after thanking him for rendering free services in the place where the shadow of cinema had fallen over.

The Sundarapandiapuram is a town without any big buildings. When we reached the village after passing through small houses and criss-cross roads, we had a nostalgic feeling like the time has changed. There was an Agrahara (Brahmins colony) with the marks of old times where the street split into two at Gopalaswami temple. You can see a continuous row of double storied houses with their roof resting on ancient stone pillars with paintings and flower faces. On the stone floors there are colorful designs. One is North street and the other is Sannathi street. These two streets lead to two corners of Periyakulam (Big pond), which is spread over in 250 acres. 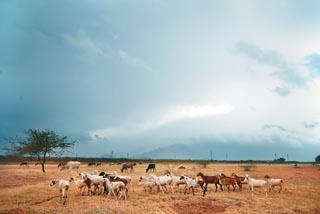 At one corner there is Thoppakulam (Pond for bathing) with a stone pavilion in the middle. You can see chilly fields, peanut fields, sunflower fields and windmill fields in the background. The fields go to higher altitudes in different levels. On the other side beyond the pond there is about hundred acres paddy fields. All together a rich village setup. That is why this place became location for about fifty movies and many serials.

In the movies picturised in Tenkasi, they choose Sundarapandiapuram to shoot the scenes in 'agraharam'. There are 180 families in this 'agraharam'. Almost everybody is relatives. In most of the houses there are elderly parents only. Their children are working at America and abroad in I.T. field. Everybody here is in relaxing mood. In the afternoon you can see women chatting sitting on both sides of the street.

We could see elderly men relaxing on the sit out. They laughed whole-heartedly. When the cinema people come, then it is the time for entertainment. In most houses the luxurious guests are film stars. 'Jagathi and Sukumari had visited here. When we see them, it is like seeing our relatives.' N. Ramaiyaar a Malayali in the 'agraharam' told us. After retiring from a Land Mortgage Bank in Kerala, now he is staying here with his wife Ganga. 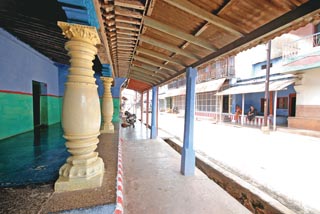 The outsides of the 'agraharam' were retained in it's old style. The conventional luxury and expensive dresses and ornaments are kept in side the houses. When we heard it from the villagers, we felt that the village is beautiful in our life also.

The control of this village is under a committee, which includes representatives from different communities. We met the head of the committee Gopalasubrahmanyam also. There are no local police stations here. There is a public group of watchmen, which includes 14 representatives from different communities. They will punish the culprits. The police will take over the case if the crime is very serious. The income of the committee comes from catching fish from the Periyakulam, which spread over 250 acres. Periyakulam, one of the biggest ponds in Thirunnalveli district, will fill up in the months of Alapasi and Karthika in Tamil era (Tulavarsham in Malayalam era).

Sundarapandiapuram is not a tourist center. Without making any disturbance to the villagers you can visit this place in silence. But if you visit there once, you will keep the views framed in your mind.