Down into the earth

We were in a journey from Hyderabad to Bangalore. Suddenly we thought of visiting Belam cave. We have only heard about Belam cave. A cave about three kilometers in length under the terrain. When we enquired about the route we found that we will have to turn from the Hyderabad â€“ Bangalore highway at Kurnur and travel about 130 kilometers to reach Belam. Hyderabad â€“ Bangalore highway was like a formula one track. This six track road will push the needle of the speedometer without our knowledge. Kurnur is 215 kilometers away from Hyderabad. We turned our car to the state highway from there. The next stretch of the jour 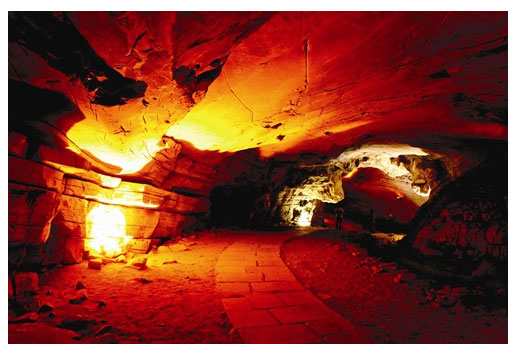 We were in a journey from Hyderabad to Bangalore. Suddenly we thought of visiting Belam cave. We have only heard about Belam cave. A cave about three kilometers in length under the terrain. When we enquired about the route we found that we will have to turn from the Hyderabad â€“ Bangalore highway at Kurnur and travel about 130 kilometers to reach Belam. Hyderabad â€“ Bangalore highway was like a formula one track. This six track road will push the needle of the speedometer without our knowledge. Kurnur is 215 kilometers away from Hyderabad. We turned our car to the state highway from there. The next stretch of the journey is through villages. These were like the villages in the Hindi movie Sholay.

Everything were in Eastman colour. The ashes of the dry soil and the red colour of th latrate hills and the dry green of the isolated tamarind trees. After travelling 35 kilometers we saw a board 'Cc palli'. A small junction. There was a woman selling tender coconut in the hot sun. Clad in a dark coloured saree, Shivamma,looked like over 40 years of age. After drinking the tender coconuts we paid the money. But she had no changes to give the balance. She gave us one more coconut after chopping its end. We told her to keep the changes, but she did'nt agree.
We bought the coconut and gave it to Shivamma's daughter who was with her. She did'nt accept our offer. When we compelled her, she finally accepted it and gave us a beautiful smile in return. Now it must be half an hour since we left Cc Palli. The road was deserted. The traffic was very low. Good road with sufficient width. Our car was running at 80 kilometer speed. Suddenly we were blocked by a gang of women dressed in dark coloured sarees. We stopped our car.

At first we wondered whether they are female naxalites. But nothing to fear about, because they are dancing with tambourin in their hands. The leader was an elderly woman. There was a framed photo of Lord Hanuman in her hands. Near by there is a small temple. A temple of Lord Hanuman. It was simple, they are collectiong donations. They said that the donations are for Holy celebrations.. There are months to go before Holy . But they won't accept such arguements. As a sign of happiness, they gave us a dance show in the middle of the road when we gave them ten rupees. After one kilometer there was another gang. We repeated the same process. Our car was blocked by putting stones on the road. Then an Andhrapradesh Road Transport Corporation bus came honking its horn. Two women removed the stones from the road. Even then the driver was scolding them from the bus. We can assume that it was something obscene by reading the expression on their faces. Before we left the place they told us that the name of this village is Betham Cherla.

Now our journey is through stone age. There were only huge hills from which granite and kadappa stones are excavated. The houses we see occasionally are made by stacking granite stones. These granite stones are transported in tractors to the processing centers. They use tractors for transporting goods and passengers. Their national vehicle is tractor itself. Seeing views and stopping here and there, we continued our journey. 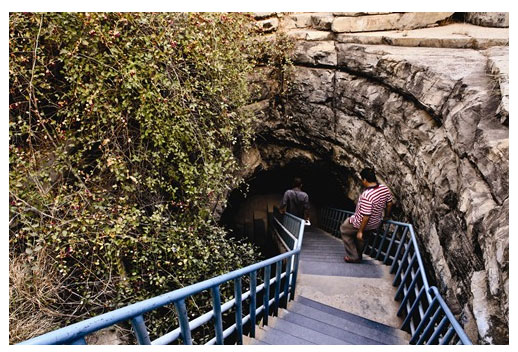 Since the timing to see the cave is restricted to 5:30 PM, now we must go fast. When we were nearing the cave the road were in bad condition. This could be due to the damage made by the big tyres of the tractors. Passing the rugged roads we reached Oak reservoir. Now there are only a few kilometers to the cave.

While we pass the entrance of the cave we can see a statue of Gouthama in meditating position. You can reach the entrance of the cave by walking ten or twenty meters in front of the twenty feet high statue. The entrance is like a well in to the earth. There were steps and railings to go down. This cave is under the control of Andhrapradesh Tourism Development Corporation. The timing for the vistors is from 10 AM to 5:30 PM. The entrance fee is Rs. 40 for dults and Rs. 25 for children.

The steps takes you to a vast area like a hall. In this hall they have arranged seats for the tourists to relax. This hall is called the worship room. As per the historian's findings it is said that this place was inhabited by the monks of Buddhist and Jaina religions. Some remnants were also found from this cave which are believed to be of these monks. Today those are kept in Anathpoor museum.

While going ahead from the hall, we get exciting views. This cave has sufficient width and height for the easy walking. The sodium vapour lamps fixed in the cave increases the beauty of the view. Strong wind is blown by the fans fixed in the holes from the exterior. We will have to congratulate the tourism development corporation for thes facilities made for the tourists. There were beautiful pictures on the walls and sealing of the cave in different colours. Our guide Sreenivas thinks that these pictures were drawn by the river water which was flowing through this cave in ancient days. But it is hard to believe. It seems like these were drawn carefully by some expert artists. Looking at these patterns, figures of human beings and animals emerge from them. Of course the nature is an intelligent and creative artist.

While we go further into the cave ite becomes narrow in some places. To enter inside, you will have to struggle a little by bowing your head. In some places where the branches othe cave ends, there was water on the ground. You won't be able to go to some places, you will have to crawl. Visitors are not allowed to go to such dark places. The historians say that this cave is older than six thousand years. The archeaologists say that the clay vessels which were excavated from here were made during B.C. 4500. The existence of this cave was brought out to the world by a British researcher named Robert Bruce Fute in 1884.

But till twenty five years back the natives of this place looked at this as a place to dispose the waste. The hidden secrets of this cave were revealed when the german archeaologist Herbert Daniel Geeber entered and inspected this cave in 1982. Then it was confirmed that this cave is very important historically and geographically . The archeaologists believe that there are a lot more to study about this cave and the historical remnants which were found in this cave. In 1988 the government of Andhrapradesh declared this as preserved area. In 1999 they made more facilities in this cave for the tourists spending Rs. 75 lakhs. In February 2002, the Andhrapradesh Tourism Development Corporation took over this cave and opened it for the tourists. Today more than a thousand tourists visit this cave every day. When we returned after visiting the branches and sub branches of the cave with the help of Sreenivas, it was getting dark. Even though the closing time of the cave is 5:30 PM, minding our request, Sreenivas allowed us some more time. Now we have to go to Ananthpoor. From there we can get back to the Bangalore highway. We will have to reach Ananthpoor before nightfall. That is the plan. But we can not drive fast. The road is very narrow. We had to pull our car occasionally to the sides to give way for the tractors which are loaded with corn grass and granite.

We drove only five or six kilometers. Then the car stopped due to some mechanical defect. When the car was blocked by the women, it was hit by a big stone. May be that is the reason for the damage . The car stopped in a small street. Leave alone workshop, there was not even a small shop there. We will have to stay in the car over night. We were so hungry too. We can feel the smell of omlets from the house near by. Slowly we went there. A woman and her son are cooking food. Her name was Rangamma. We asked for some food. 'Yes, if you can pay we will make food for you'. Hot parathas and omlets in real mallu style. No doubt, her husband is a Malayali.