Car rally amidst the mist

Uttarakhand is riding on motorsport to take tourism in the state into top gear. For the second consecutive year, Uttarakhand Tourism Development Board is co-organizing the Uttarakhand Adventure Car Rally. With the rally, the mountain state has brought motorsport firmly back on its tourism calendar.... 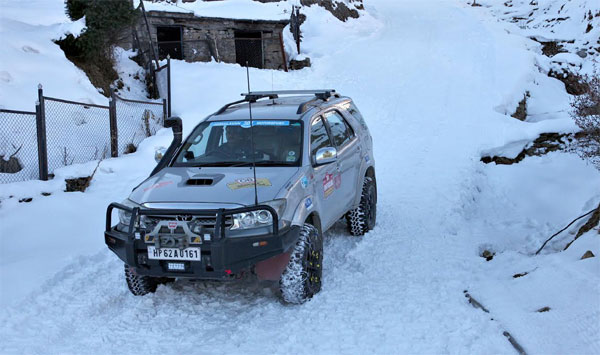 Uttarakhand relies on tourism as its economic mainstay, and the focus of the rally is on getting tourists back to its green vales after the devastating floods in June 2013. Secretary Tourism Mr Uma Kant Panwar said motorsport is a valuable addition to Uttarakhand's adventure portfolio, targeted at mid and high-end tourists. 'The rally, which is organized on international standards, showcases to the world that the roads in the state are great. The rally will pass by some of our most loved tourism hotspots like the world-class ski resort at Auli, and Ramnagar, which flanks the Jim Corbett National Wildflife Park,' said Mr Panwar.

The Uttarakhand Adventure Car Rally will have 35 teams driving cars and SUVs, going across about 1,000 kilometers in the state. Each team will comprise a driver and a navigator. In order to ensure that there are no traffic disruptions, Uttarakhand Adventure Car Rally will follow the Time- Speed-Distance (TSD) format. This is the sober form of motorsport that allows competitors to go slow in thickly populated areas, and stick to specified speed limits at all times.

The Uttarakhand Adventure Car Rally will touch some of the most beautiful tourist hotspots of the state. It will begin from Dehradun on February 2 and move via Dev Prayag, Karan Prayag, Rudra Prayag and Nand Prayag to the ski resort at Auli. With newly-laid out, smooth roads, the picturesque drive leads to the celebrated snow-tops, a delight for skiers and sight-seeing. On the way is Shivpuri, which draws huge domestic and foreign tourism for white water rafting.

On Day Two, the rally will come down from Auli to Ramnagar, which flanks the Jim Corbett National Wildlife Park, again a tourist hotspot. The rally will end at Dehradun on Day Three. Mr Uma Kant Panwar said that the rally marks the resurgence of tourism in the state. 'Uttarakhand has world-class holiday destinations for families and youth alike. The roads are good again, and we invite all tourists to enjoy the unique holiday experience here,' he said. Uttarakhand Adventure Car Rally adds to the state's adventure tourism calendar, along with skiing, mountaineering, white water rafting and mesmerizing encounters in the wildlife parks.

The rally is being organized by Himalayan Motorsport. This is the premier Shimla-based motorsport club which organizes the Raid De Himalaya, one of the top-ten toughest rallies of the world. Uttarakhand Adventure Car Rally is being supported by Maruti Suzuki and JK Tyres.

Mr Vijay Parmar, the president of Himalayan Motorsport, said that after the internationally popular Himalayan Rally, motorsport has been re-started in Uttarakhand on a small scale. 'Motorsport has great potential to grow in Uttarakhand, and will showcase its excellent tourism destinations nationally and internationally. The state has a super network of roads, and more roads are being constructed in highly picturesque locales,' he said.

The Himalayan Rally, which used to go through Uttarakhand, was last organized almost 25 years ago.
Share on

Munnoor Kochi waterfalls is a feast for the eyes

History of an industry remains buried in two ponds of Maickamone

Nandadevi – serene and hypnotising peak in the Himalayas
News in Videos