Girl in the forest

A girl who dedicated her life for the forest, living behind the joyous city life. The tidings of the female wild life photographer Vasudha Chakravarthi. 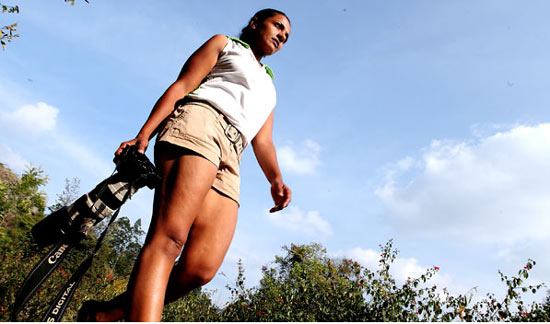 When the night darkens, some visitors will come to the hunting lodge of Vasudha. Bears, bisons, pigs and cheeta. They are the guests who come here to drink water from the small pond in the courtyard. Elephants are the regular visitors. Among them there is a tusker also. A quiet fellow. After drinking water he roams around for a while, making some noises to acknowledge his presence and will leave the place . He is named as Sadhu. When the Sadhu comes the Sulthan will become silent. He was instructed by Vasuda, not to bark and make any problems, when he comes. Sulthan is a rottweiler who gives company to Vasudha in her cottage in the forest. During the day time he will be with her as a shadow, where ever she goes.

The lonely life in the forest was chosen by Vasudha Chakravarthy herself. The only female wild life photographer who has become a part of the forest. For Vasudha, who comes from an Iyengar family in Mandiya, forest is like her own home. And photography her passion. A girl who migrated to Neelagiri leaving her good job in a corporate bank, to a life with minimum facilities and without any company, only to feel the heart beats of the forest. For the past seven years Vasudha is staying in a bungalow in the three hundred acre Sophia estate located in Kallattikkunnu which is thirteen kilometers from Ooty. This hunting lodge made of stones and wood, was built by Irish about one hundred and eighty years back. No changes were made to the old structure. Only the stables below are converted to rooms. 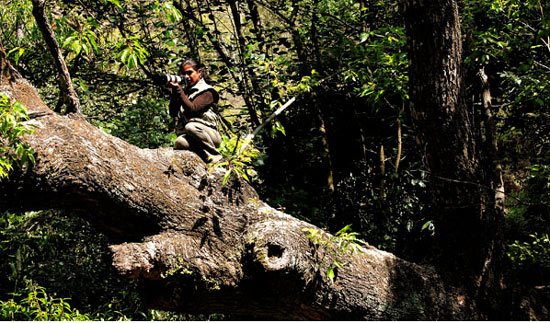 If you go inwards seven kilometers from the Mysore - Ooty road there is Sholur market. From there four kilometers travel. You can reach the huge gate of Sophia estate by travelling through the zig zag forest path-you may call it a road - in the middle of the mountain. After passing the gate and going ahead, we heard a bark which would tremble any stranger. When we were standing frozen,Vasudha invited us to her home with a smile. 'Come in, he is tied up.' A big ferocious black rotfweiler in a chain. It is sure that he could handle a cheeta single handed. On the bungalow's wall, the boxing gloves hanging near the name

board, shows that the inhabitants of the house are not ordinary people. 'Kick boxing practice gives good stamina and fastness.' The five feet girl who has won the black belt, explained with confidence, with her blue eyes wide open.

When we reached there she was in a happy mood because the police have found her green coloured four wheel drive jeep which was stolen. The thieves discarded it when the diesel got exhausted. Most of the trips in to the forest and outside are in this jeep. But alas, she will not get the jeep without bribing the police . 'For the past four days there is no water. Since the guests are coming, I went to the near by stream to take a bath.' She said smiling. 'I will give you tea, we can arrange for the lunch also.' Suddenly the girl became a house wife. We entered the house ignoring the barking of Sulthan. 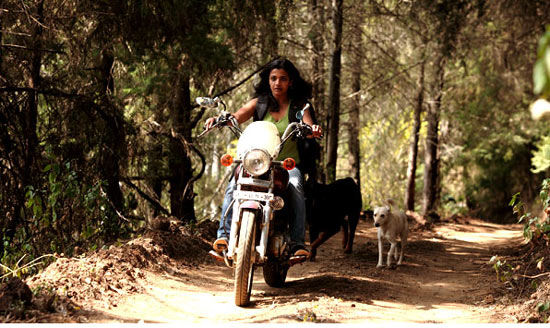 The doors of the long bedroom open to the beauty of surrounding nature . On the four sides you can see the high mountains of Balikkal, Ullathi and Akoni. Beyond that the heights of Neelagiri draws a borderline to the horizon. The host is busy making tea. There is cat named Minchu in the kitchen to help her by drinking milk and breaking vessels. She is not in good terms with Sulthan. Other two exepect Sulthan are pure vegetarians. She had given us prior warning that the food menu will be pure vegetarian. 'I just forgot to tell you to bring some pickles from Kerala.' Beating her head with her hand, she expressed her

disappointment. There is a long room with a chimney adjacent to the kitchen where you can sit near a fire place to warm up. At an end of the room there is a TV and a DVD player. Nearby there is a rack filled with CD s of English movies. There are books staked in all empty spaces. Most of them are about wild life photography. Ther is a Yamaha Enriser motor bike parked outside near the wall.

The reason for the change of the life of Vasudha was a documentary about Clouded leopards which she saw when she was in Kolkata. The picturisation of the hard work put in for bringing back a perishing species and the living conditions of that disappearing creatures shook her mind. The realisation that the consequence of destruction of the nature by the human beings is wide spread was the inspiration for her journey to understand the nature and redeem it. The creator of the Bannarghatta gardens Mr. Krishna Narayanan, a nature lover, highly influenced Vasudha in this matter. When she completed the course on Light and Photography in Ooty, she was sure of one thing. Her way is the forest. The Iyengar family was shocked when they heard that their sweet little girl is going to live in the forest. But there was no change in the girl's decision. That was also a transplantation from a smooth life. Father, mother, friends, job, merry making in Bangalore, joyful habits and the family life. A life like a monk, leaving everything behind. When the money exhausts, she will go to Ooty and take taxi on rent and drive it for money or take up some assignments of modelling photography. She has got experience assisting V.K.Prakash in film photography also. 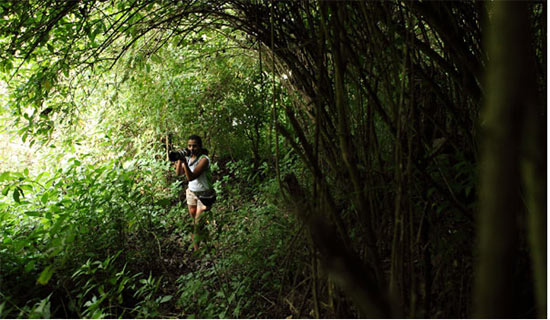 She started her first work among the tribes in Bandipur, Muthumala Masinagudi and Ooty. Kurubans, Kurunpans, Irulans and Badagans. No body knows the smell and warmth of forest as much as these children of forest knows. They only taught her that ears and smells are more useful than the eyes in the forest. First the tribes looked at this smart girl who rides very fast on a bike, with a camera on her shoulder, through doubtful eyes. Gradually she became a part of their life. They taught her what is the resemblences with the forest, the change of expressions of them and the life cycle of the creatures. Vasudha copied each

of them carefully in her mind and camera too She becomes talkative when she explains her adventurous experiences in the forest. Charging elephants from all sides, cheetas over the head looking for their prey, a leopard on the roadside, venamous snakes following, the bears that challenge you. All encounters were exciting.

Since she has no tele lens, usually all are close and risky encounters. She goes near the elephant, whole body covered with dry elephant dung. Along with that if you apply some juice of the leaves of special kind, the wild animals will refrain from attacking. Vasudha's main weapon is Cannon 400 D with 7 - 200 L.I.S U.S.M. lens. There is a Nikkon 300 also. But Vasudha is aware of the fact that without a telephoto lens, Cannon 400 it is not fit for wild life photography. 'Wild life photography is expensive, the telelenses cost lakhs of rupees. I do my micro photography by inverting the lens. The only luxury I go for are lenses.'. Vasudha

has been to Manas and Kasiranga in Assam and from there, to the unknown slopes of the Mukkurthi mountains in Tamilnadu, with her camera, even in restricted situations. Vasudha is also the leader of the Green Gurukul, an organization which is working for the preservation of Neelagiri mountains. This organization is working for preserving the forest and for giving awareness about the nature and education. The main problem of functioning of this organization is money. Mrs. Jayalalitha has agreed to meet them. Vasudha is in great expectation. 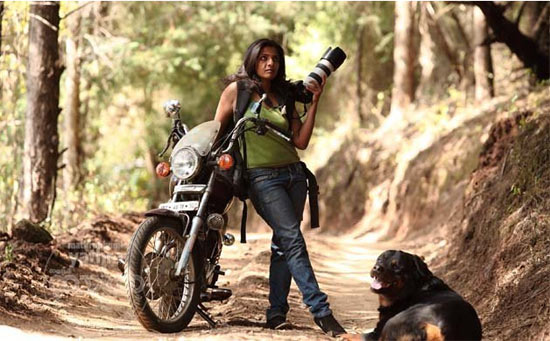 We started for a small trekking. In between the preparations, while attending a phone call Vasudha said 'The land lord has reached here from Bangalore, he would like to meet you'. He called us because he saw the vehicle with Kerala registration out side the gate. The estate owner is Dr. Krishnakumar Manikkath,a good hearted and jolly person. A member of Kochi dynasty. He owns the 350 acres of estate surrounding the Kallattikkunnu. He has left alone the estate to become a forest. A pure nature lover. 'No more tea or coffee estates, let the streams and birds come'. There must be the influence of Vasudha behind this

decision which no body will take that easily. He stays in a bungalow two or three furlong away from the hunting lodge. His wife is Japanese. No children. The bungalow at the Kallattkkunnu is museum of history. Old tables and chairs made by Lanthans, the sword with which Paliyattachan slashed Meccola, Kathana sword of Japanese Samuraies, messages from the kings, old keys and so on. A museum within the forest. A totally unexpected and rare view. In a year most of the time Manikkath will be in Bangalore or Japan. For two weeks he will be in the estate at Kallatti. With aid from Japan he runs villages for children named Happy Valley at Maddoor, Bangalore and Shiohama in Japan. 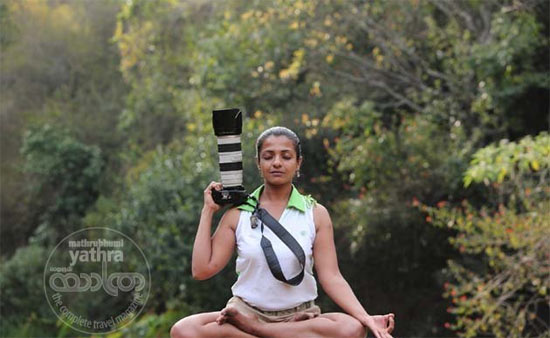 After a memorable meeting, we started our trekking. We started our journey through the slopes of 'American face', which is a rock with red indian face and where the female leopard of Kallatti comes and sits. Our aim is the forest surrounding the Kallatti water falls. After climbing the ascent with difficulty we stood before a descent trying to take breath and slightly confused. The smart Vasudha started to descent with her pre-set camera which can be used at anytime like a weapon, talking to everything in front of her and controlling Sultan.

'Beaming like a Cheshire Cat', says Dulquer on exploring Hikkim in Himachal
News in Videos