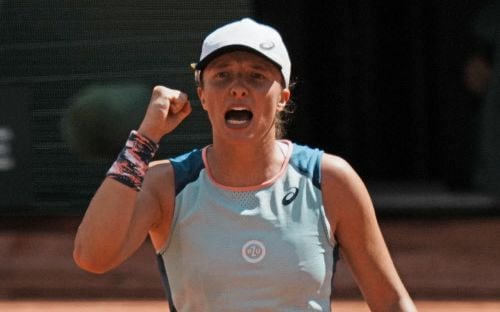 The Polish star cruised to a 6-3, 6-2 win on Court Philippe Chatrier to set up a last-four meeting with Daria Kasatkina on Thursday.

Swiatek will equal Venus Williams' record for the longest unbeaten run for a women's player in the 21st century if she wins a second Roland Garros title this week.

But she said she still feels nervous before big matches despite appearing in almost unbeatable form.

"I do (feel nervous)," said Swiatek. "If I stop feeling nervous than something weird is going on...

"Sometimes stress is a positive thing as it makes you more tense and more active."

The top seed, who turned 21 on Tuesday, won her only Grand Slam title so far in Paris two years ago.

She has won five consecutive tournaments this year, including four WTA 1,000 titles.

Despite not being at her best, Swiatek still hit 30 winners in an ultimately one-sided match to make her third Slam semi-final and second in succession.

The 11th seed Pegula has also enjoyed a fine season but is still waiting to reach a maiden major semi-final after also losing in the last eight at the previous two Australian Opens.

Another dominant display from the Pole looked likely when Swiatek broke in the first game and then led 40-0 in the second.

But Pegula reeled off five straight points to break straight back and signal the world's best player may not have it all her own way.

Swiatek played an excellent return game to move 4-3 in front, before wrapping up the opening set by completing a run of four successive games as Pegula mishit wide.

She saved a break point early in the second set before opening up a 3-1 lead herself with a backhand winner up the line.

Pegula managed to save three match points in the eighth game as she tried to make Swiatek serve the match out, but the former champion sealed victory with another perfectly-placed backhand.

World number 20 Kasatkina, playing in her third career quarter-final at the Slams but first since 2018, has made the semis without dropping a set.

Kudermetova was in her first quarter-final at the majors and the tension was apparent as she committed 50 unforced errors and had to save 12 of 17 break points.

"You could see that the match was really nervous and tight, especially the tie-break," said Kasatkina, a former junior champion in Paris.

Kudermetova, also 25, needed a medical timeout at 5-6 in the second set and battled to save four match points in the tiebreak.

Kasatkina, however, secured victory on her fifth match point courtesy of a sweetly-timed backhand drop shot.

"My box were pretty nervous, especially at the end," she added. "Thank you guys and keep calm - it's OK!"

Kasatkina won her first clash with Swiatek on the Eastbourne grass last year, but has lost all three of their meetings in 2022 in straight sets, without winning more than five games in a match. AFP