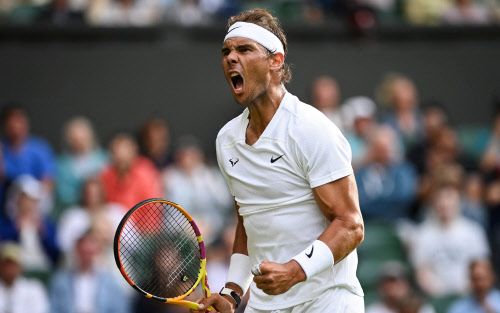 London: Rafael Nadal tops the bill in the Wimbledon second round on Thursday, eyeing a clear path to the semi-finals as Iga Swiatek seeks a 37th consecutive win.

Two-time winner Nadal, hunting a calendar Grand Slam, was given a fright in his opener before finding his mojo against Francisco Cerundolo to win in four sets.

The Spaniard has benefited from the withdrawal of last year's finalist Matteo Berrettini with coronavirus and a shock first-round exit for Canada's sixth seed Felix Auger-Aliassime.

The major threat to Nadal's hopes for a third Wimbledon crown on his side of the draw is Greek fourth seed Stefanos Tsitsipas, who faces Australia's Jordan Thompson.

Second seed Nadal, who takes on Lithuanian journeyman Ricardas Berankis, is halfway to a calendar Slam after winning the Australian Open and French Open this year.

The feat has not been achieved in men's tennis since Rod Laver did it in 1969, with Novak Djokovic falling at the final hurdle last year when he lost in the US Open final.

Nadal, a 22-time Grand Slam champion, struggled with crippling foot pain throughout the French Open but has received treatment aimed at reducing the pain and was moving freely on Tuesday.

"I need to keep improving things," said the 36-year-old after his tough test against Argentina's Cerundolo.

"But at the end of the match I improved. At the most critical moment, I think I raised my level. That's a very positive thing."

Tsitsipas is full of confidence after winning on grass in Mallorca on Saturday to secure the ninth singles title of his career but has never gone beyond the fourth round at the All England Club.

"Having tournament wins on surfaces elevates you, puts you in a better mood, as well," he said.

"It is very good for your self-esteem, and that's how I have been feeling. It's important to feel that way, especially when you are competing at the highest level of tennis."

The antics of Nick Kyrgios will be closely watched when he plays Filip Krajinovic after the Australian took aim at "disrespect" from fans following his five-set win over Britain's Paul Jubb.

The 27-year-old, who stunned Nadal on his way to the quarter-finals at the All England Club in 2014, is a potential threat after semi-final runs in grass-court events in Stuttgart and Halle.

Seeds are also tumbling on the other side of the men's draw, with notable early losers including third seed Casper Ruud and last year's semi-finalist Hubert Hurkacz.

But top seed Novak Djokovic, seeking to draw level with Pete Sampras on seven Wimbledon titles, is already safely through to the last 32.

In the women's competition, Poland's Swiatek, who has won her past six tournaments, takes on Dutch player Lesley Pattinama Kerkhove.

"It's amazing for me to have that kind of streak," said the 21-year-old top seed. "It just shows how much work we've been putting for every match.

"I'm pretty happy that I could show consistency because it was always my goal."