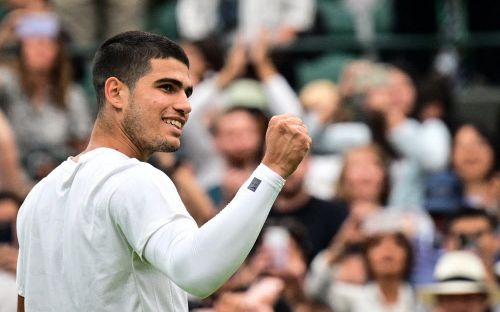 The 19-year-old survived to reach the second round at The Championships for the second time. In a tight battle on Court 1, the Spaniard rode out an attacking bombardment from Germany's Jan-Lennard Struff to advance 4-6, 7-5, 4-6, 7-6(3), 6-4 after a tense four hours and 11 minutes.

Alcaraz was the youngest to line up among his 127 fellow contenders at The Championships this fortnight.

Competing for the second time at Wimbledon, Alcaraz raised his intensity and dug his heels in as he scampered around the baseline to hang in points, while he found moments of magic in the key moments to improve his five-set record to 5-1.

Alcaraz will next play Dutchman Tallon Griekspoor or Fabio Fognini as he aims to reach the third round at SW19 for the first time.

After a slow start on Centre Court, former world no. 1 Andy Murray rallied past James Duckworth 4-6, 6-3, 6-2, 6-4 to advance at Wimbledon. The Scot will next play 20th seed John Isner, against whom he owns an 8-0 head-to-head record.

Elsewhere, Jannik Sinner scored a pair of firsts at Wimbledon with his 7-5, 4-6, 6-3, 6-2 first-round victory against Stan Wawrinka. The 20-year-old Italian earned his first win in his second Wimbledon main-draw appearance, with the victory doubling as his first tour-level victory on grass.

After both men traded crushing baseline blows throughout two tight sets, Sinner's agility and consistency proved the difference in the third and fourth sets as the 10th seed ran out a comfortable winner.

The Italian finished with 42 winners to 33 errors and improved his court coverage throughout the match despite a few slips. Wawrinka looked to step into the court often, but even when he did gain a positional advantage, Sinner's persistent retrieving allowed the Italian to keep his footing in the points. (ANI)