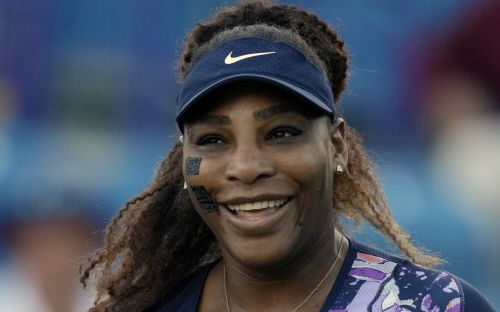 Serena Williams acknowledged Tuesday that she will be stepping away from her professional tennis career soon. She turns 41 next month, shortly after the U.S. Open ends in New York.

Williams has won 23 Grand Slam singles titles along with 14 major championships in doubles, all with her older sister, Venus, plus four Olympic gold medals, dozens of other trophies and millions of dollars.

A look at some key moments in her career:

Williams claimed her first Grand Slam title at age 17 by beating Martina Hingis 6-3, 7-6 (4) in the U.S. Open final on Sept. 11, 1999, becoming the first Black woman to win a major tennis championship since Althea Gibson in 1958. The next day, Serena and Venus defeated Chanda Rubin and Sandrine Testud 4-6, 6-1, 6-4 in the doubles final for the first of their 14 women's doubles Grand Slam trophies as a pair.

The U.S. Open women’s final moved to prime time in 2001, a move widely attributed to the Williams sisters’ ascension in the sport; nearly 23 million viewers tuned in as Venus beat Serena for the championship, the largest TV audience of any program that night, including a college football game between Notre Dame and Nebraska.

Serena beat Venus 7-5, 6-3 in the final of the 2002 French Open, the first time in 11 Grand Slam matches between two sisters in the professional era that the younger one won.

Serena Williams again beat her sister in an all-in-the-family final at a major tournament, winning 7-6 (4), 6-3 against two-time defending champion Venus at Wimbledon in 2002. “My dad always said that one day we’d be playing in the finals of Wimbledon, in the finals of the U.S. Open, just the big ones,” Serena said that day. “And here we were, 10, 15 years later.”

DEBUT AT NO. 1 IN RANKINGS

Serena Williams first appeared at No. 1 in the WTA rankings on July 8, 2002, two days after winning Wimbledon. She would go on to spend 319 weeks there — the third-most of anyone — including a stretch of 187 consecutive weeks, tied with Steffi Graf for the most in a row.

Wrapping up a so-called “Serena Slam” — four major titles in a row — Serena beat Venus yet again in the 2003 Australian Open final. The score was 7-6 (4), 3-6, 6-4. That made Serena the fifth woman to hold all four Grand Slam titles at once, adding to the titles she won in 2002 at the French Open, Wimbledon and U.S. Open.

Serena successfully defended her Wimbledon title in 2003, defeating her sister 4-6, 6-4, 6-2; Venus was bothered by a strained abdominal muscle.

After missing time because of surgery on her left knee, Williams came back to beat Lindsay Davenport 2-6, 6-3, 6-0 in the 2005 Australian Open final.

Again returning after being sidelined for a stretch because of her knee, Williams overwhelmed Maria Sharapova 6-1, 6-2 in the 2007 Australian Open final. Williams was ranked just 81st after missing much of the previous season and became only the second unseeded woman in the professional era to win the Australian Open.

A 6-0, 6-3 defeat of Dinara Safina gave Williams her fourth Australian Open trophy in 2009.

Serena beat Venus 7-6 (3), 6-2 in the 2009 singles final at the All England Club for her third Wimbledon title — each title match coming against her sister — and then they went back out on court and teamed up to win the doubles trophy, too.

A 6-4, 3-6, 6-2 victory over Justine Henin in the 2010 final gave Williams her fifth Australian Open championship.

Williams defeated Vera Zvonareva 6-3, 6-2 in the 2010 Wimbledon final for her fourth title at the All England Club.

Williams' career has seen its share of injury interruptions; one of her most difficult moments came a few days after her 13th Grand Slam title, when she cut her feet on broken glass while leaving a restaurant in Germany. She eventually needed two operations on her right foot and spent 10 weeks in a cast, then 10 weeks in a walking boot. Then she got blood clots in her lungs and a pool of blood under the skin of her stomach.

The first first-round Grand Slam loss of Williams' career came against Virginie Razzano at the 2012 French Open. Soon after that, Williams began working with coach Patrick Mouratoglou; that partnership ended this year after about a decade and 10 major titles together.

Williams ended a two-year Grand Slam drought at Wimbledon in 2012 with a 6-1, 5-7, 6-2 win against Agnieszka Radwanska in the final.

Two points from defeat, Williams turned things around and grabbed the last four games to edge Victoria Azarenka 6-2, 2-6, 7-5 for the 2012 U.S. Open title, her fourth at Flushing Meadows. It was the first three-set U.S. Open women's final sine 1995.

A year after her early exit at Roland Garros, and more than a decade after her first title there, Williams won the 2013 French Open by beating defending champion Sharapova 6-4, 6-4 in the final.

Never dropping more than three games in a set, including a 6-3, 6-3 victory over Caroline Wozniacki in the final, Williams equaled Chris Evert and Martina Navratilova with 18 major championships by capturing the 2014 U.S. Open. Williams won a third straight title at Flushing Meadows and sixth overall.

Williams stretched her Grand Slam winning streak to 28 matches and completed a second “Serena Slam” of four majors in a row by beating Garbiñe Muguruza 6-4, 6-4 in the 2015 Wimbledon final.

Williams' bid for the first true Grand Slam in tennis since 1988 — winning all four singles championships during one calendar year — came up just short: She lost in the 2015 U.S. Open semifinals to 43rd-ranked Roberta Vinci 2-6, 6-4, 6-4.

Williams equaled Graf's record for most Grand Slam titles in the professional era (also known as the Open era, it began in 1968) by collecting No. 22 at Wimbledon in 2016 with a 7-5, 6-3 victory over Angelique Kerber in the final. It was a seventh Wimbledon trophy for Williams.

Williams surpassed Graf by getting record No. 23 at the 2017 Australian Open with a win, fittingly, against Venus in the final, 6-4, 6-4. Only Margaret Court has won more Grand Slam singles titles in tennis history, 24, but only 11 of hers came during the professional era. No one knew it at the time, but Williams was pregnant at Melbourne Park; her daughter, Olympia, would be born on Sept. 1. Williams dealt with health complications after the birth.

Williams returned to Grand Slam action at the 2018 French Open and made it to the finals at Wimbledon and the U.S. Open that year — and at both tournaments again in 2019. She was the runner-up all four times.

Serena, Venus Williams out of US Open; 1st time since 2003

Serena Williams out of Wimbledon after stopping with injury