Djokovic set sight on winning gold at 2024 Paris Olympics; says he want to 'play better than ever' 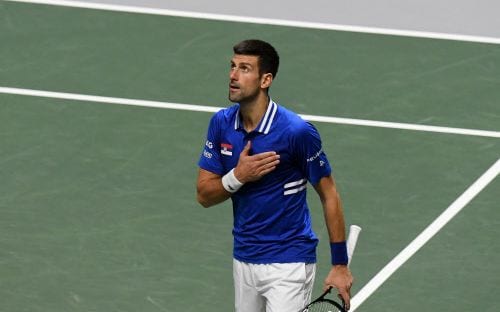 Belgrade: Novak Djokovic said he was ready to "play better than ever" on the eve of his return to tennis, a month after being deported from Australia over Covid-19 vaccination issues.

The Serb also admitted that he has the 2024 Paris Olympics in sight, with an ambition for the single big title he hasn't yet managed to win. "I want, I am preparing and planning to participate in the Olympic Games in Paris and represent Serbia," he said.

The 34-year old admitted that the fiasco might have left a mark, but that he is aiming for glory again.

Decided to stay positive, was happy with ...

Venkatesh Iyer is a mature cricketer, he ...

"I can't say that things will be the same when I return to the court .. but there is an additional reason to play better than ever," he told Serbian public broadcaster RTS on Thursday.

The world number one set out his ambition to play big tournaments, while admitting that his participation does not lie solely with him.

"It will depend on the countries where the tournaments will be held, I will be ready and want to continue my career," said Djokovic.

Djokovic's wishes might collide with the rules once again, as most countries oblige athletes to be vaccinated, but his stance on receiving the jab have not changed at the moment.

"As a professional athlete, I triple-check everything that enters my body and how it affects me. If something changes for half percent, I feel it," he said.

Djokovic, however, again rejected accusations of being opposed to vaccines.

"I don't like to be associated with certain initiatives or communities. I never said I belong to any initiative," he said.

"I keep an open mind ... Everything is possible in life, we will see how the situation will evolve, but at the moment I decided not to do it (get vaccinated)".

The Serb added he appreciated the support he received from several players while being detained in Australia, especially highlighting the unusual solidarity from a man with whom he would usually trade insults.

"(Nick) Kyrgios surpised me the most because we had our missunderstandings in the past," Djokovic said.

"I thanked him and other players who stood with me -- Medvedev, (Alexander) Zverev and plenty of female players like Alize Cornet".

The Serb is participating in the ATP 500 tournament in Dubai, which will be held from Monday in the rich Gulf emirate, where the anti-covid vaccine is not mandatory. AFP