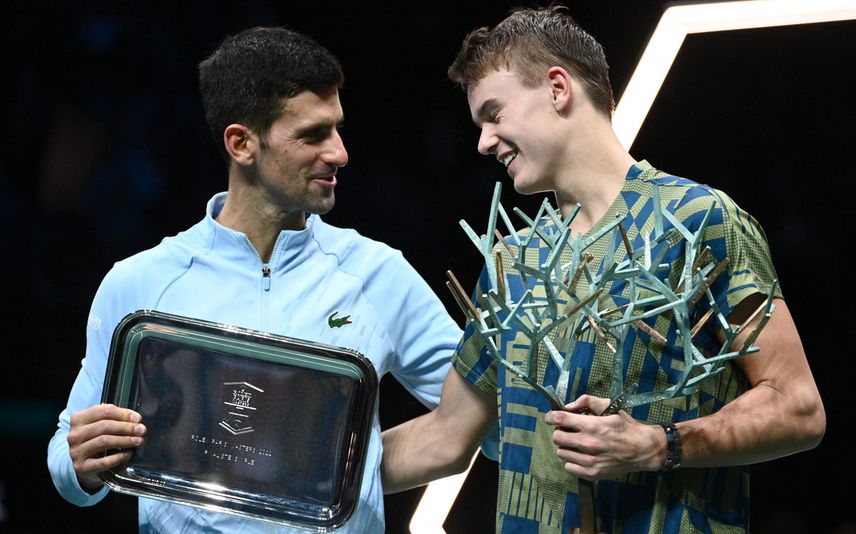 Paris: Danish teenager Holger Rune shocked six-time champion Novak Djokovic to clinch his first Masters title in Paris on Sunday after coming from a set down to win 3-6, 6-3, 7-5.

Rune, 19, became the youngest winner of the Paris tournament since an 18-year-old Boris Becker in 1986 after beating five top-10 players in as many days -- the first to do so in the same tournament.

He is the fifth first-time Masters winner this season and will be the first Danish man to break into the top 10 on Monday.

"It's probably the best feeling of my life, of my whole career," said Rune.

"It's kind of a small dream come true, even though I have bigger dreams."

After winning the title in Stockholm either side of runner-up finishes in Sofia and Basel, Rune began his run to a fourth straight final by saving three match points in the opening round to beat Stan Wawrinka.

He then took down Hubert Hurkacz followed by Andrey Rublev before seeing off Carlos Alcaraz as the world number one retired with injury while trailing by a set in the quarter-finals.

Rune snapped Felix Auger-Aliassime's 16-match winning streak to set up the clash with Djokovic, who had not lost at Bercy since his defeat to Karen Khachanov in the 2018 final.

"It was also very important for me to beat Felix and Alcaraz and these guys," said Rune.

Serbia's Djokovic came into Sunday's final having won 21 of 22 matches since the start of Wimbledon, which he won for the seventh time in July to match Pete Sampras.

"For somebody who is so young to show this composure and maturity in the big match like this is very impressive. He's had a week of his life," said Djokovic.

He broke for a 3-1 lead as Rune served back-to-back double faults in the biggest final of his career to date.

Djokovic comfortably held out to pocket the opening set and looked to have Rune on the ropes when he surged 40-0 ahead on his opponent's serve in the first game of the second set.

But Rune battled back superbly to thwart Djokovic and then swung the momentum in his favour by immediately breaking to go 2-0 up the following game, which proved enough to force a decider.

The 16-year age gap between the pair was the biggest in a Masters final since Rafael Nadal, then 19, defeated 35-year-old Andre Agassi in Montreal in 2005.

Rune's inexperience resurfaced when he double-faulted attempting a big second serve to hand Djokovic a 3-1 edge, but the Dane showed his remarkable character to break back straight away.

Instead it was Djokovic who cracked when the pressure was highest, spearing a forehand wide to present Rune with the chance to serve for the trophy.

Rune withstood six break points in a marathon final game before securing the title after two hours and 34 minutes to complete an incredible week in the French capital.

"It was the most stressful game of my life," said Rune of the gripping finale. "My heart was almost in my brain. I was already starting to think about the tie-break. I'm very proud I could finish it."

Rune is qualified for next week's Next Gen Finals in Milan, but with his victory over Djokovic he also becomes the first alternate for the ATP Finals in Turin from November 13-20.

Djokovic will turn his focus to winning the season-ending finals for a record-equalling sixth time, to draw level with Roger Federer.

"Of course I'm disappointed with the loss today, but I was very close," said Djokovic.

"It was just very few points that decided a winner. But the level of tennis that I'm playing is high, and I like my chances (in Turin).

"Every match is like a final there. There are no easy matches." AFP