Swiatek's winning streak is the best since Serena Williams's 34 successive victories in 2013. 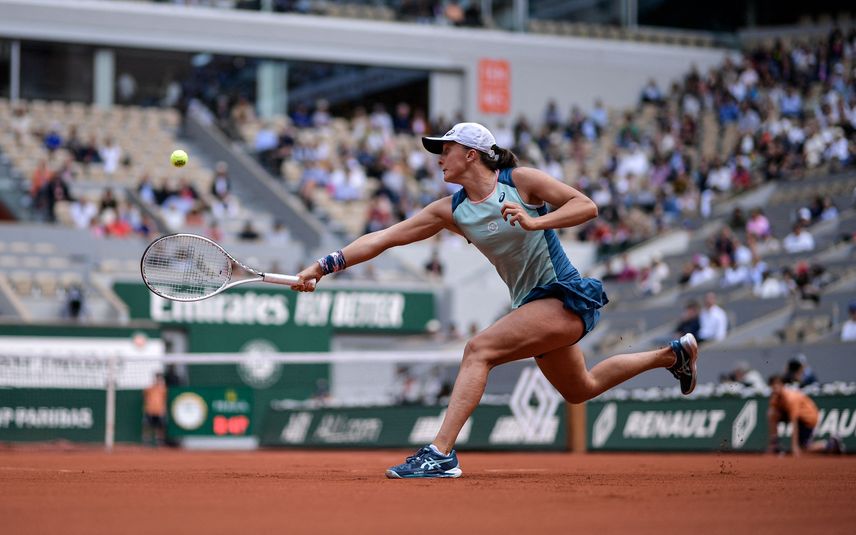 Paris: World number one Iga Swiatek was the only top 10 women's seed left standing at the French Open on Saturday as Casper Ruud and Holger Rune gave Roland Garros a rare Nordic twist with landmark performances.

Swiatek, the 2020 champion, dropped serve three times against 95th-ranked Danka Kovinic of Montenegro before sealing a 6-3, 7-5 third round victory, her 31st successive win.

"I wanted to play really aggressively but sometimes I felt I was hitting with too much power and it was hard to control," said the 20-year-old Pole.

Swiatek's winning streak is the best since Serena Williams's 34 successive victories in 2013.

She next faces Chinese teenager Zheng Qinwen who made the last 16 on her debut when French veteran Alize Cornet, playing in her 61st consecutive Grand Slam, retired with a leg injury, trailing 6-0, 3-0.

Having stunned 2018 champion Simona Halep in the second round, Zheng becomes only the fourth Chinese woman to make the fourth round in Paris where compatriot Li Na captured her landmark Slam title in 2011.

Cornet, the last Frenchwoman in the draw, was booed off by the Court Philippe Chatrier crowd.

"It hurt more than my injury," she said.

Spain's Paula Badosa, who made the quarter-finals in 2021, retired due to a calf injury when she was trailing Russia's Veronika Kudermetova 6-3, 2-1.

The exits of Badosa and Sabalenka meant that for the first time in the Open era only one top 10 seed has survived to the fourth round.

In stark contrast, nine of the top 10 men's seeds have made the second week.

Ruud hit 39 winners and goes on to face Poland's Hubert Hurkacz, a Wimbledon semi-finalist last year who is also in the last 16 in Paris for the first time.

Meanwhile, Holger Rune became the first Danish man in the Roland Garros fourth round since 1959 when he knocked out France's last man, Hugo Gaston.

The last Danish man to make a Slam fourth round was Kenneth Carlsen at the 1993 Australian Open.

The Greek star had to come back from two sets down to beat Lorenzo Musetti and then needed four hours and four sets to see off 134th-ranked qualifier Zdenek Kolar in his first two outings.

However, the 23-year-old was never troubled on Saturday, breaking his Swedish opponent six times.

"It was different from my first two matches. The conditions were warmer and drier, which suited me better," said Tsitsipas after a season-leading 34th win.

Medvedev has not dropped a set in three rounds and will next play former US Open champion Marin Cilic who ended 37-year-old Gilles Simon's 17-year-old Roland Garros career with a 6-0, 6-3, 6-2 win.

Medvedev fell in the opening round on his first four trips to Paris before reaching the quarter-finals a year ago.

"It was really hard, everyone was asking how I could be number two in the world without getting past the first round," said the US Open champion who has never won a clay title.