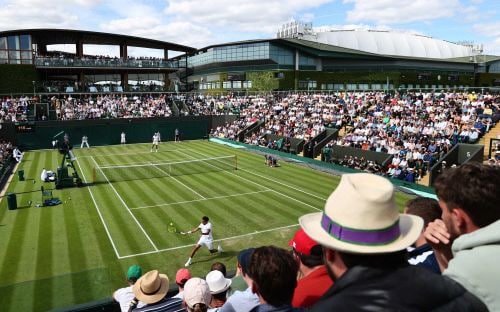 London: This is not what one thinks of when pondering the supposedly genteel roots of tennis, and the purportedly proper atmosphere at dates-to-the-1800s Wimbledon, a country club sport being contested at a place officially called the All England Lawn Tennis Club: a player, Nick Kyrgios, capping a first-round victory Tuesday by spitting in the direction of a spectator he said was hassling him.

“I’ve been dealing with hate and negativity for a long time, so I don’t feel like I owed that person anything. Like, he literally came to the match to literally just not even support anyone, really. It was more just to stir up and disrespect. That’s fine," Kyrgios said after beating Britain's Paul Jubb 3-6, 6-1, 7-5, 6-7 (3), 7-5. “But if I give it back to you, then that’s just how it is.”

During the match, which filled the stands at 1,980-seat Court No. 3 — and attracted lengthy lines of folks hoping to eventually be let in, likely owing to the popularity of the anything-can-happen Kyrgios, a 27-year-old from Australia, and the involvement of a local player — Kyrgios asked, without success, to have the fan removed for cursing and sending other verbal abuse his way.

This comes less than three weeks after organizers at a tournament in Stuttgart, Germany, investigated when Kyrgios said he heard racist insults from the crowd during a match, and raises questions about when unruly behavior is too unruly or whether more should, or even can, be done to shield athletes from inappropriate comments that come from the stands.

“I’ve grown up in Australia, so I definitely know what racism is. I feel like it’s a battle, constant battle, coming from that place and dealing with it. ... I don’t think it’s got anything to do with that. I just think spectators, in general, think there’s just no line there anymore. They can just say something and they film it and then they laugh about it,” Kyrgios said. “It’s like that could actually hurt someone’s feelings. Do you know what I mean?”

Tennis players long have dealt with online abuse, particularly from gamblers angry about a particular match's outcome. Negative interaction among athletes and the people paying to watch them is gaining more attention in real life, too.

At a tournament in Indian Wells, California, in March, Naomi Osaka cried after a spectator shouted, “Osaka, you suck!”

The four-time Grand Slam champion explained the episode dredged up thoughts of when Serena and Venus Williams were jeered at that event in 2001 after Venus withdrew, citing an injury, before the sisters were supposed to play each other. Their father, Richard, said racial slurs were sent his way; his daughters stayed away from that tournament for years.

“Personally, I’ve never experienced any type of heckling on the court (and) I’m very lucky, because I know other players have experienced it. Definitely online, I have the experience a lot, but that’s different,” said Coco Gauff, an 18-year-old Floridian who was the runner-up at the French Open this month and won her Wimbledon match Tuesday. “I definitely think there is a line that you shouldn’t cross."

Gauff mentioned what she called the “obvious” examples of racial or sexual comments.

“That’s definitely way past the line,” she said. "There are some things that you do have to deal with as an athlete. That’s just a part of the sport. Particularly in tennis, it’s not very common. It’s not in the tennis culture, especially let alone at Wimbledon. I think the line definitely is a lot closer to being crossed than I would say than other sports because that’s just the culture of tennis. For me, personal attacks — that kind of crosses the line, really.”

An All England Club spokesperson said no fans were removed from Kyrgios' match, but that there could be a review of what went on, including what he said at his news conference.

As for the sorts of things he is hearing from people during his matches, Kyrgios concluded: “I’m just starting to think that it’s normal, when it’s really not.” AP