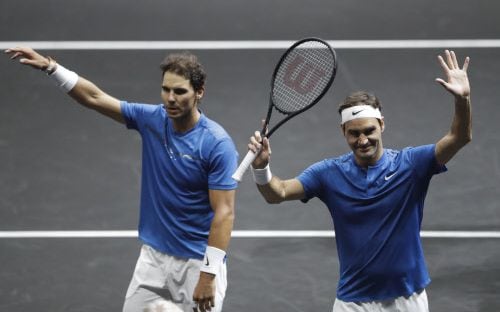 London [UK]: The 20-time Grand Slam champion Roger Federer will team with longtime rival and friend Rafael Nadal on Friday at the Laver Cup in what the former World No. 1 confirmed on Twitter would be his final tour-level match.

The Swiss and Spaniard great will take to the court against Jack Sock and Frances Tiafoe at The 02 in London following the conclusion of Andy Murray's match against Alex de Minaur.

"I am not sure if I will be able to handle it all but I will try," Federer said during Team Europe's post-tournament press conference.

"I've had some tough moments in the past, being horribly nervous. All these years. This match feels a whole lot different. Playing with Rafa feels really different. To be part of this historic moment is amazing and unforgettable for me," Nadal said during the press conference. "I am super excited and I hope I can play at a good level. Hopefully, together we can create a good moment and hopefully win a match," he added.

The Swiss tennis great last Thursday announced his retirement from competitive tennis saying that the upcoming Laver Cup in September would be his last Association of Tennis Professionals (ATP) event as a player.

Federer took to Twitter to announce his retirement through a letter. He has won 103 ATP singles titles and overall 1,251 matches throughout his illustrious career. Federer has also won 20 Grand Slam titles, including a record-making eight Wimbledon men's singles titles.

"The Laver Cup next week in London will be my final ATP event. I will play more tennis in the future, of course, but just not in Grand Slams or on the tour. This is a bittersweet decision because I will miss everything the tour has given me. But at the same time, there is so much to celebrate. I consider myself one of the most fortunate people on earth," Roger Federer wrote in his retirement letter.