On Sunday, Nadal will play in his 30th Grand Slam final when he tackles Casper Ruud, the first Norwegian man to make a championship match at the majors. 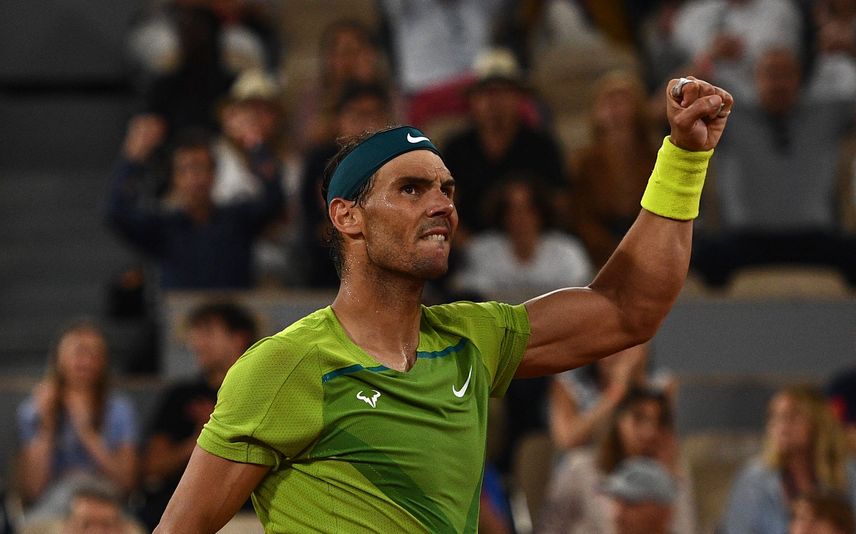 Spain's Rafael Nadal reacts after a point against Germany's Alexander Zverev during their men's semi-final singles match on day thirteen of the Roland-Garros Open tennis tournament at the Court Philippe-Chatrier in Paris | Photo: AFP

Paris: Rafael Nadal reached his 14th French Open final on Friday when Alexander Zverev was forced to quit their last-four clash after suffering a sickening right ankle injury on a day of drama at Roland Garros.

On Sunday, Nadal will play in his 30th Grand Slam final when he tackles Casper Ruud, the first Norwegian man to make a championship match at the majors.

Zverev turned his ankle as he chased down the ball in front of the players' boxes on Court Philippe Chatrier where his shocked team and family were sitting.

As his piercing screams of pain echoed around the 15,000-seater court, a tearful Zverev was taken off the court in a wheelchair as a concerned Nadal looked on.

Minutes later, the 25-year-old returned on crutches and conceded the match, with Nadal embracing his heartbroken opponent.

"If you are human, you feel sorry for a colleague," said 13-time French Open champion Nadal.

"It's very tough and very sad for him. He was playing an unbelievable tournament and he's a very good colleague on the tour.

"I know how much he's fighting to win a Grand Slam. For the moment, he was very unlucky. I'm sure he'll win not one, but much more than one. I wish him all the best."

He added: "For me, to be in the final of Roland Garros is a dream, without a doubt, but at the same time, for it to finish that way... I have been there in the small room with Sascha and to see him crying like that..."

Zverev later said he had "suffered a very serious injury".

"It was a very difficult moment on the court. It looks like a very serious injury but the medical team are still checking it and I will keep you updated," he said.

"But congratulations to Rafa, it's an amazing achievement to be in the final for the 14th time.

"I hope he goes all the way and makes more history."

Until the dramatic end of the match, Zverev had been pushing Nadal all the way.

In a rollercoaster, 91-minute first set, Zverev broke in the opening game before Nadal levelled at 4-4.

The Spaniard, dripping with sweat under the closed roof, saw three set points come and go in the 10th game as the German's all-or-nothing hitting kept him in the match.

Nadal, celebrating his 36th birthday Friday, then saved four set points in a knife-edge tiebreak, one of them off a spectacular running crosscourt forehand.

A blistering forehand pass gave him the opener on a sixth set point.

Zverev, playing in the semi-finals at Roland Garros for the second successive year, hit 25 winners and 26 unforced errors.

The second set was punctuated by eight breaks of serve. When Nadal broke for 2-1, he did so on the back of an exhausting 44-shot rally.

Nadal becomes the second oldest man to make the final in Paris after 37-year-old Bill Tilden who was runner-up in 1930.

Victory saw Nadal, who knocked out world number one and defending champion Novak Djokovic in the quarter-finals, take his record at the French Open to 111 wins and just three losses.

If he wins on Sunday, he would be the tournament's oldest champion, eclipsing 34-year-old compatriot Andres Gimeno who took the title in 1972.

Nadal has made the final despite his own doubts over his long-term future in the sport.

A chronic left foot injury has forced him to admit that any match may be the last of his record-breaking French Open career.

Ruud became the first Norwegian man to reach a Slam final and hailed Nadal as his "idol".

However, there was a worrying security breach in the third set when a female protester ran onto the court and tied herself by the neck to the net.

She wore a shirt which bore the slogan: "We have 1028 days left" before being eventually cut free by security staff. The match resumed after a 15-minute delay.

"It was a great match from my side, I didn't start the greatest but Marin played a very good first set," said 23-year-old Ruud.

"I look up to Rafa. He's the perfect example of how to behave on the court, never gives up and never complains. He's been my idol all my life."

Ruud described the protest as a "tricky and difficult situation".

"I only saw her back, I didn't know if she was holding anything or what was around her neck."

Centre writes to 5 states including Kerala over rise in Covid cases, weekly ...