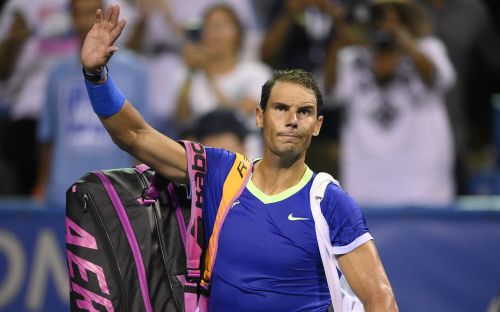 WASHINGTON: If Rafael Nadal was hoping to ease his painful left foot back into action after nearly two months off tour, that's hardly what happened in his Citi Open debut, which ended after just two matches.

A night after needing three sets and more than three hours to get by, Nadal was eliminated 6-4, 1-6, 6-4 by 50th-ranked Lloyd Harris of South Africa under the lights on Thursday at the hard-court tournament.

The match ended when Nadal got broken for the second time, with Harris dropping his racket in disbelief after delivering a lob winner.

“I played this last game really bad,” said Nadal, a 20-time Grand Slam champion who was seeded No. 1 in Washington. “My serve was not working the proper way.”

This was less of a physical tug-of-war between a pair of heavy hitters than Nadal's victory over 192nd-ranked Jack Sock on Wednesday.

The one bit of good news for Nadal on Thursday was that he said his injured foot felt better.

About 3 1/2 hours before entering the U.S. Open tuneup's main stadium to face Harris, Nadal had made his way to tiny Court 5 for a training session.

As fans shouted “Vamos, Rafa!” and snapped photos and video with their phones from the stands at an adjacent court, Nadal didn't do much running, mostly staying in place while hitting groundstrokes and practicing volleys, serves and returns for 45 minutes with Emilio Gomez, a 29-year-old from Ecuador who is ranked 165th and lost in the Citi Open's first round.

Not at all taxing by Nadal's usual exacting and exhausting standards.

And against Harris, when the points mattered, it took Nadal a bit to get going. It wasn't really until the second set, that he really seemed into it, as did the fans, many of whom rose to salute when Nadal broke to lead 3-1 with a forehand passing winner.

But down the stretch in the third set, it was Nadal, surprisingly, who faltered.

Sinner is a 19-year-old from Italy who reached the quarterfinals at the French Open last year and the fourth round there this year before losing to 13-time champion Nadal each time.

Korda is a 21-year-old from the U.S. who is only the third man in the last 50 years to reach the fourth round in his debuts at both Roland Garros, which he did in 2020, and Wimbledon, which he did last month.

The two have gotten to know each other on tour and Sinner said Korda texted him about joining up in doubles at the hard-court tournament in Washington. After facing each other on a breezy, 90-degree afternoon, they reached the doubles semifinals by teaming up at night to defeat Nick Kyrgios and Frances Tiafoe.

In a contest between a couple of other members of the sport's youth movement, Jenson Brooksby of Sacramento, California, eliminated No. 2 seed Felix Auger-Aliassime of Canada 6-3, 6-4. Both are 20; Auger-Aliassime turns 21 on Sunday.

“He's going to be dangerous in the future,” said Auger-Aliassime, a Wimbledon quarterfinalist last month.

Korda and Sinner never had played against each other — or even practiced together — until this week.

He trailed 5-2 in the second set before coming back.

“He was playing better. ... I tried to find a solution as soon as possible,” Sinner said.

Korda's father won the 1992 Australian Open, his mother was ranked in the top 30 and his two sisters are golf stars, including No. 1-ranked Nelly, who shot a 62 on Thursday to take the lead in that sport at the Tokyo Olympics.

In the Washington quarterfinals, the fifth-seeded Sinner will face Steve Johnson of the U.S. Others advancing Thursday included No. 11 John Millman, who plays Brooksby next, and Denis Kudla.