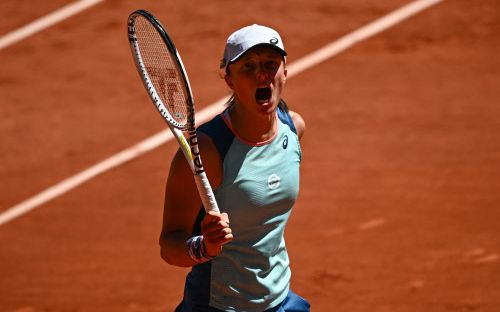 Paris: Iga Swiatek booked her place in a second French Open final on Thursday as the world number one outclassed Russian Daria Kasatkina to extend her unbeaten streak to 34 matches.

Swiatek will equal Venus Williams' record for the longest women's winning run since 2000 if she beats either Coco Gauff or Martina Trevisan in Saturday's final.

"I'm so grateful. It's easier to play matches with this kind of support," Swiatek, who won 10 of the last 11 games, said in her on-court interview.

"It's surprising this week how much they're supporting me.

"I try to treat every match in the same way because when I think about how it's the biggest match of the season so far, it stresses me out."

It will be the 21-year-old's second Grand Slam final, as she looks to win a sixth consecutive WTA title.

The Polish star has stormed up the rankings this season, moving from world number seven to the summit during her remarkable run.

Swiatek hammered 22 winners past her opponent and she has still lost only one set in the tournament, against Chinese teenager Zheng Qinwen in the fourth round.

Kasatkina won her first clash with Swiatek on the Eastbourne grass last year, but has lost all four of their meetings in 2022 in straight sets, without winning more than five games in a match.

The 20th seed was playing in a major semi-final for the first time, but made 24 unforced errors in an errant display.

After a quick opening hold from Swiatek, both players struggled on serve and traded breaks.

Kasatkina managed to stave off a break point in the fourth game though and levelled the first set.

But she was still finding it difficult to live with the consistent groundstrokes of her opponent and slipped 4-2 behind after horribly mishitting what should have been a simple winner at the net wide of the tramlines.

Swiatek had the set wrapped up just minutes later as a backhand return winner sealed a break to love.

Kasatkina managed to cling onto her first service game in the second set, but Swiatek was on a roll and forged 3-1 ahead when Kasatkina blazed long.

That effectively ended the semi-final as a contest, and top seed Swiatek finished it off with a run of five straight games, capped by her first ace on her first match point.

Later on Thursday, American teenager Gauff and unheralded Italian Trevisan will both bid to reach their maiden Grand Slam final.

The 18-year-old Gauff only graduated from high school while in Paris and will face an opponent 10 years her senior.

French Open: Bopanna-Middelkoop crash out of competition, loses to Rojer-Arevalo ...