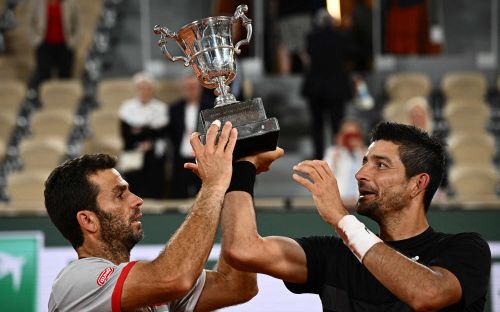 Paris: The duo of Marcelo Arevalo and Jean-Julien Rojer captured their first Grand Slam title as a team by defeating the Croatian-American duo of Ivan Dodig and Austin Krajicek in the final of the men's doubles category on Saturday.

Arevalo and Rojer produced strong serving performances at Court Philippe Chatrier. It took them three hours and three minutes to register this landmark win as a duo.

After Dodig and Krajicek won the first set by margin of 6-7 (4). Then the Croatian-American duo fought their way out of this early hiccup to win the next two sets.

At the trophy ceremony, Rojer expressed his happiness at winning the title, stating that moments like these are special as one gets older and does not know how much time he has left to play.

"I am really proud. I know I am getting older and it makes these moments much more special because you do not know how many more times you have left to play on such beautiful courts. I am extremely, extremely grateful," said Rojer.

Arevalo congratulated the opposition for their performance in the tournament.

"You guys are amazing opponents... I feel we are super lucky to win the title today. I want to thank everyone inside the stadium, it was amazing. You guys made our moment precious. Thank you Roland Garros and Paris for this," he added.

In this season, Arevalo and Rojer have captured three tour-level titles as a duo, having won in Dallas and Delray Beach in February. Their record as a team stands as improved, with 24-10.

Rojer, 40 is now the oldest Grand Slam men's doubles champion in the Open Era. It is his third major title, after winning titles with Horia Horia Tecau of Romania at Wimbledon 2015 and US Open 2017.

"I really want to thank my partner," Rojer said. "We spent a lot of time living and training in Miami. We decided to play together. I know this kid has a big heart. He showed it today and I thank him. I am glad he trusts me and I am so happy and proud of this moment here," he added.