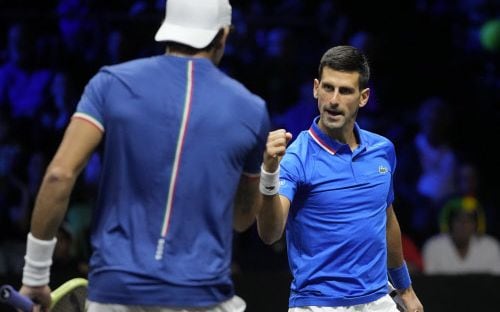 London: Novak Djokovic made an impressive return after two months out of action as the Team Europe star thrashed Frances Tiafoe 6-1, 6-3 with Roger Federer cheering him on at the Laver Cup on Saturday.

Djokovic showed no signs of rust in his first appearance since winning the seventh Wimbledon crown of his remarkable career in July.

The 35-year-old followed his dominant victory over Tiafoe at London's O2 Arena with another win just hours later alongside Matteo Berrettini in the doubles.

Djokovic and Berrettini beat Jack Sock and Alex de Minaur 7-5, 6-2 to put Team Europe 8-4 up heading in the final round of matches on Sunday.

Djokovic, a 21-time Grand Slam champion, missed the US Open in September due to his unvaccinated status, leaving him to take an enforced break from competitive action.

But he was quickly back in the old routine against Tiafoe as he broke in the fourth game and again in the sixth to take the opening set in just 23 minutes.

Djokovic cruised through the second set, with Federer and the rest of the Team Europe squad gathering at courtside to congratulate him.

"I haven't played for two months so I'm really glad to have won. It was a pretty decent match from my side," Djokovic said.

Federer said a tearful goodbye to tennis late on Friday night when the 20-time Grand Slam champion and doubles partner Rafael Nadal were beaten by Tiafoe and Sock.

The 41-year-old announced earlier this month that he would retire after the Laver Cup due to the knee problems that had kept him on the sidelines since Wimbledon in 2021.

"We knew it would be an emotional farewell for Roger but we were all taken away by the moment. I think we would all agree this was one of the most beautiful moments anyone has experienced on a tennis court," Djokovic said.

"It's mixed emotions. Sadness because one of the greatest athletes of all time is leaving the sport, but on the other hand seeing him happy with the way it all played out.

"I was just very grateful and privileged to witness that."

Federer's fitness issues meant he could only play one doubles match, so Berrettini was called into the Team Europe squad to replace the Swiss legend after the last act of his incredible career.

The 26-year-old Italian, who finished as the 2021 Wimbledon runner-up, had to dig deep to hold off a spirited challenge from Auger-Aliassime, a 22-year-old Canadian rising star.

On the first day of his life after tennis, Federer could have been forgiven for following Nadal's example and heading off for a well-earned rest.

But Federer showed his passion for tennis is unlikely to fade anytime soon as he sat courtside to support Berrettini despite the post-midnight finish to his emotional finale.

Federer, who was involved in setting up the Ryder Cup-style Laver tournament, looked relaxed and refreshed as he mimicked Berrettini's clenched-fist celebration during the Italian's victory.

"I'm really happy for the win, but this weekend we're celebrating something bigger than Laver Cup. It's just about him (Federer)," Berrettini said.

"Having the chance to live what we lived yesterday is something that will be stuck in my heart and my brain forever."

Norrie was only playing because Nadal had opted to pull out of the rest of the tournament after the Federer doubles match for what organisers said were "personal reasons".

The Spanish world number three has been struggling with an abdominal injury while his wife is heavily pregnant. AFP