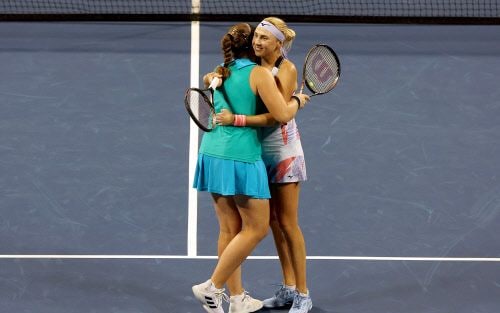 Cincinnati : Lyudmyla Kichenok and Jelena Ostapenko continued a powerful season by winning their biggest team title so far at the Western and Southern Open on Saturday.

Kichenok and Ostapenko defeated Nicole Melichar-Martinez and Ellen Perez 7-6(5), 6-3 in one hour and 24 minutes to capture the WTA 1000 title in Cincinnati.

After finally getting on the court after multiple rain delays, it was the Melichar-Martinez and Perez duo who originally held the upper hand, breaking Ostapenko in the first game of the match and building a 4-2 lead. Kichenok and Ostapenko, though, got back on serve at 4-4.

In the tiebreak, a powerful Ostapenko return gave her team a duo of set points, and Kichenok and Ostapenko transformed the second of the two to eke out the one-set lead.

There were no break points through 3-3 in the second set, but after that, Kichenok and Ostapenko cruised to the title, winning the final four games of the match.

"It's my biggest title and I'm very happy," Kichenok said after the match.

"It's hard to describe, it's amazing. I just can't find the words. I'm still a bit shaky after the match, it's very exciting," she added.

"It doesn't matter what the score is, [the key was] to be aggressive and to put pressure on them," WTA.com quoted Ostapenko.

"That was a thing they didn't like, and it helped us in the important moments," she added. (ANI)