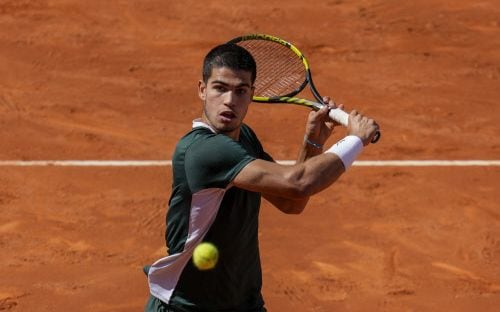 The loud cheers from spectators at the Caja Mágica in Madrid were, instead, directed at the teenage sensation considered the Spanish successor to the all-time great Nadal.

In a clash of generations, 19-year-old Carlos Alcaraz overcame an injury to defeat his idol 6-2, 1-6, 6-3 in the Madrid Open quarterfinals on Friday.

The teen recovered from a bad ankle twist early in the second set to earn his first victory against Nadal, marking what could be the beginning of a change of guard in Spanish tennis.

“It's obvious there's (a change in guard)," Nadal said. “He turned 19 yesterday, I'm almost 36 years old. If (the change) begins today or not, we will find out in the next months. I'm happy for him. He was better than me in several aspects of the game."

Nadal also was loudly supported throughout the match, and the five-time champion received a huge ovation as he left the court.

“It means a lot to me to beat Rafa, to beat the best player in the history on clay,” he said. “This is the result of all the hard work I've done.”

It was Nadal’s first loss to a Spaniard in six years, since to Fernando Verdasco at the 2016 Australian Open. He had a 138-21 record against his countrymen before facing Alcaraz for a third time.

The ninth-ranked Alcaraz is the youngest ever semifinalist in Madrid. He will next face top-ranked Novak Djokovic, who eased past Hubert Hurkacz 6-3, 6-4.

The other semifinal will be between Stefanos Tsitsipas and defending champion Alexander Zverev. The fourth-seeded Tsitsipas defeated Andrey Rublev 6-3, 2-6, 6-4, while the second-seeded Zverev beat Felix Auger-Aliassime 6-3, 7-5.

Still far from his best form after a six-week injury layoff, Nadal predicted a hard time keeping up with the energy of Alcaraz. He was right early on, as the youngster overpowered him to easily win the first set with three breaks.

But Alcaraz lost momentum after needing medical attention for his right ankle, losing 20 of the next 22 points as Nadal cruised through the second set.

“It was a little bit painful, but it was no reason to do the second set that I have done,” Alcaraz said. “I think that I have let myself go. I was thinking of my ankle all the time and not on playing the match.”

The match also was interrupted in the second set after a fan became ill in the stands.

Both players got off to a great start this season; both have a tour-leading three titles already.

Nadal’s run was hampered by a rib stress fracture he sustained in his semifinal win against Alcaraz in Indian Wells. Nadal saved four match points to get past David Goffin in a third-round match that lasted more than three hours on Thursday.

He said it was a positive balance for him after winning two matches following his injury layoff.

“It’s an easy loss to digest in that regard, because we knew what we could expect here," he said. “My only dream is (to) be in Paris (for the French Open) healthy enough and physically good enough to compete at the highest level possible.”

Three-time Madrid champion Djokovic had little trouble against Hurkacz. The Serb took advantage of Hurkacz’s slow start and took a 3-0 lead after the Polish player ceded his first service game by hitting long.

Another spate of unforced errors cost Hurkacz a second-set break when he smacked a forehand long. Djokovic’s dominance was never ended and he won on his fourth match point.

Djokovic is trying to regain his best form after not being allowed to play in the Australian Open because he was not vaccinated.

“It’s definitely a positive indication that I am on the right track in terms of getting to the desired level of tennis, being in one of the best tournaments in the world where all the best players are playing,” he said. "It does give me confidence, and it encourages me to keep going. I have a lot of positives to take from the last couple of days.”

Djokovic beat Gael Monfils in straight sets to start his campaign at the outdoor clay tournament, and a walkover after Andy Murray withdrew because of a stomach illness before their match on Thursday.

Djokovic praised Alcaraz after arriving in Madrid this week, and said his son had already replaced Nadal with the young Spaniard as his favorite player. AP