The 28-year-old former world No.4 will surge back into the Top-20 on Monday after a week that saw her win eight matches in nine days, defeat three top-10 opponents, and overcame Kvitova to win her 10th career title, third of the season, and first WTA 1000 since 2017. 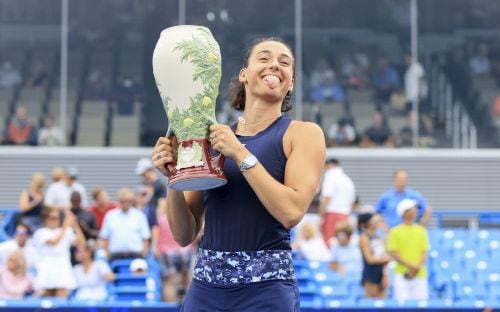 Mason: Caroline Garcia of France defeated Petra Kvitova of the Czech Republic 6-2, 6-4 in the Western & Southern Open final, becoming the first qualifier to ever win a WTA 1000 title since the tier was created in 2009.

The 28-year-old former world No.4 will surge back into the Top-20 on Monday after a week that saw her win eight matches in nine days, defeat three top-10 opponents, and overcame Kvitova to win her 10th career title, third of the season, and first WTA 1000 since 2017.

The world No.35 took 1 hour and 42 minutes to topple the 28th-ranked Kvitova.

"Pure joy, I think," Garcia was quoted as saying by wtatennis.com after the victory on Sunday evening. "Just happiness. Every single win is very important. Every title is very special, (WTA) 250, 1000, it's always very hard to describe it. It's not happening so often, and you have to really enjoy it. I'm really grateful for this great week of tennis, and to win another title, it's very special.

"Every match, every day was a new day, new challenge. Every time I had to be focused on myself, on my game, what can I do, how I can be more aggressive, how can I improve. Just one day at a time I ended up here today in the final and now lifting the trophy," she added.

"The (WTA) 1000, everything goes so fast. You have to refocus every morning. It's a tough challenge, but I'm really happy the way we made it through."

Garcia's ranking fell as low as No.79 this year, but since the French Open, no one has been performing better on the circuit. The former world No.4 has won 27 main-draw matches since June, leading all players during that time period.

It is an incredible return to the winner's circle at WTA 1000 events for Garcia, who claimed the first two WTA 1000 titles of her career in back-to-back weeks at Wuhan and Beijing in 2017. With 33 match-wins on the year in total, only Iga Swiatek (50), Simona Halep (39) and Ons Jabeur (38) have more victories this season than Garcia, according to wtatennis.com.

During her stellar run this summer, Garcia has also become the ace leader for the season, surpassing Wimbledon champion Elena Rybakina of Kazakhstan. Garcia added 11 aces in Sunday's final to increase her total for the year to 286.

"We know (Kvitova is) a big hitter, trying to move you as soon as she can and putting pressure on the return," Garcia said. "So the plan was definitely to not let her do that, which is not always easy, but that was the plan." IANS

Garcia tops Gauff at US Open for 1st Slam semi