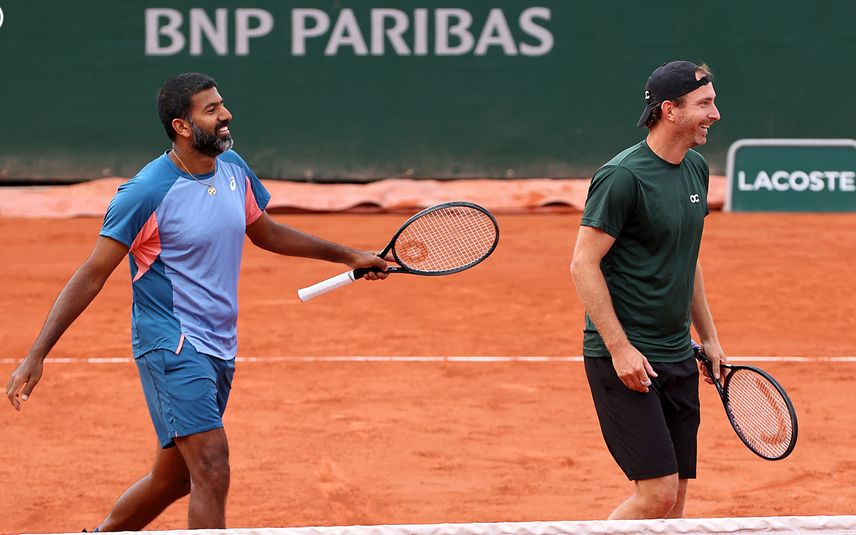 Paris: The Indo-Dutch pair of Rohan Bopanna and Matwe Middelkoop crashed out of the ongoing French Open 2022 after losing to pairing of Jean Julien Rojer and Marcelo Arevalo in the semi-finals of the men's doubles category on Thursday.

The Salvadoran-Dutch pair defeated Bopanna and Middelkoop by a margin of 6-4 3-6 6-7 (8-10).Rojer and Arevalo got off a great start and won the first test 6-4. However, in the next set, the pairing of Bopanna and Middelkoop made a comeback, winning it by 6-3. The final set was an exciting one and after a tie, a tie-breaker followed. The Salvadoran-Dutch pair won the close tie-breaker 10-8.

Now, Rojer-Arevalo will meet either the Spanish-Argentina pairing of Marcelo Granollers and Horacio Zeballos or Ivan Dodig and Austin Krajicek in the finals of the men's doubles category.

Bopanna and Middelkoop had a great run till the semi-finals. They defeated the duo of Sascha Gueymard Wayenburg and Luca Van Assche in the first round and the duo of Andrey Golubev and Fabrice Martin in the second. After defeating the Croatian duo of Nikola Mektic and Mate Pavic in the last 16, they qualified for the quarterfinals. In the quarterfinals, they defeated the duo of British Llyod Glasspool and Finland's Harri Heliovaara to qualify for the semis.

On the other hand, Jean Julien Rojer and Marcelo Arevalo defeated the duo of Hans Hach Verdugo and Philipp Oswald in the first round and French pairing of Enzo Couacaud and Manuel Guinard in the second round. In the last 16, they defeated the duo of Tim Puetz and Michael Venus to qualify for quarterfinals where they defeated Rafael Matos of Brazil and David Vega Hernandez of Spain to reach to semi-finals (ANI)