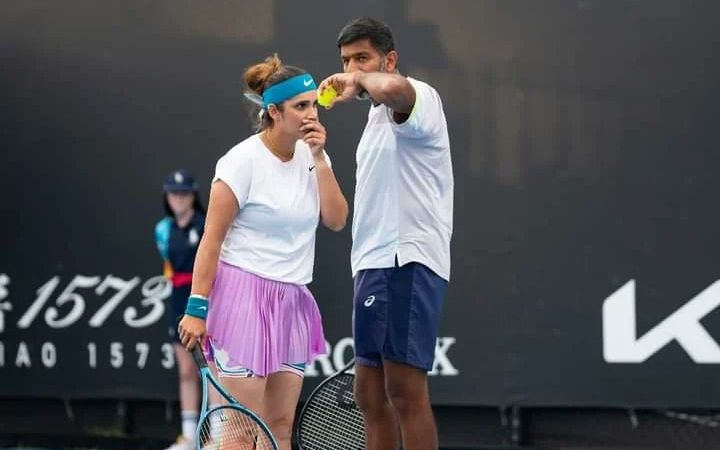 Melbourne: Indian ace players Sania Mirza and Rohan Bopanna rolled into the semi-finals of the ongoing Australian Open 2023 mixed doubles event after the duo was handed a walkover in their quarters clash at Melbourne Park on Tuesday.

Mirza and Bopanna were slated to face Latvia's Jelena Ostapenko and David Vega Hernandez of Spain in their final-eight clash but advanced after their opponents decided to withdraw.

In the semis, the all-Indian duo will play the winner of the clash between USA's Desirae Krawczyk and Britain's Neal Skupski, the third seeds, and USA's Taylor Townsend and Britain's Jamie Murray.

Earlier, the Indian mixed doubles duo advanced to the quarterfinals of the ongoing Australian Open after defeating the Uruguay-Japanese pair of Ariel Behar-Makoto Ninomiya in their second-round match on Monday. Mirza-Bopanna defeated their opposition 6-4, 7-6 (11-9).

Sania Mirza will play in her final Grand Slam event at the 2023 Australian Open because the Indian tennis pro will retire after the WTA tournament in Dubai later this month.

Sania Mirza and Rohan Bopanna, who advanced to the semi-finals of the Rio 2016 Olympics together, is India's last remaining challenger at the Australian Open in 2023.