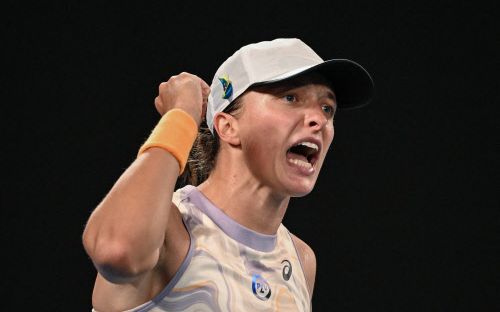 Melbourne: Reigning women's World Number 1 Iga Swiatek started off her Australian Open campaign with a hard-fought win over Germany's Jule Niemeier in the opening round of women's singles on Monday.

Swiatek downed her German opponent by 6-4, 7-5. She is set to face Colombia's Camila Osorio in the second round on Wednesday.

Swiatek, a three-time Grand Slam champion and a semifinalist in the tournament last year, is in pursuit of her maiden Australian Open title. Niemeier put pressure on Swiatek's serve initially, but the Polish star came through with some clutch shots, big backhands to ward off challenges posed by her opponent.

The Pole saved two break points and pounced at her first opportunity to break her opponent and seal the opening set.

"Honestly, I really wanted to be focused on myself because I know Jule can serve amazing," Swiatek said as quoted by WTA.

"At the US Open, she was really using the fast conditions that we played in," she added.

The German fought back in the second set, opening up a 3-1 lead. But Swiatek stayed true to her top billing with a brilliant fightback which saw both players locked at 5-5 in the second set. There was no looking back for Swiatek from that point and she emerged victorious in this almost two-hour match.

"For sure I feel the expectations, that people kind of little bit they want to take for granted that I am going to win those first rounds," Swiatek told reporters after the match, adding, "It is always not easy. Every match is a different story. You have to really work hard to make it done, to win."

"It just feels like sometimes, they are not treating you still as a human, but more like a robot who has to win," said Swiatek.

Earlier on Monday, No.7 seed Coco Gauff opened her 2023 Australian Open campaign with a straight-set triumph over the Czech Republic's Katerina Siniakova at the Rod Laver Arena.

The 18-year-old American advanced to the second round with a 6-1, 6-4 victory. Gauff will face 2021 US Open champion Emma Raducanu next.

Playing in her fourth Australian Open, Gauff opened up play and advanced through the first set in just 22 minutes.

After winning the longest rally of the match (22 strokes) and breaking Gauff to lead 4-2, Siniakova came back in the second set and appeared poised to force a third set. However, the lead was short-lived.

Gauff immediately broke again, earning a chance to serve out the victory. Before the American sealed the victory with a backhand volley winner in the longest game of the match, Siniakova fought valiantly to save six match points.

"Really pleased with myself. Katerina is a fighter I knew she was going to fight until the last point and she proved that today. I'm glad I stayed mentally right there," WTA.com quoted Gauff as saying.

British US pen champion, 20-year-old Emma Raducanu eased past her 27-year-old opponent Tamara Korpatsch 6-3, 6-2 in 1 hour and 25 minutes. Raducanu improved her head-to-head record against Korpatsch to 2-0, riding on her powerful groundstrokes.

Her free flowing memories brought back memories of her glory run at the Flushing Meadows in 2021.

Elsewhere, on Court 7, Ukraine's Marta Kostyuk continued with her winning record at Melbourne Park as she got the better of No.28 seed Amanda Anisimova, 6-3, 6-4 in a straight set. The 20-year-old, ranked No. 61, broke Anisimova on each of her four break points to score the tournament's first upset in 78 minutes. With 29 wins to 16 unforced errors compared to Anisimova's 21 winners and 18 unforced errors, Kostyuk proved to be the match's better aggressor.

Kostyuk will next lock horns with Australian wild card Olivia Gadecki in the second round. The 20-year-old Gadecki earned a victory in her Grand Slam debut, defeating Polina Kudermetova 7-5, 6-1. (ANI)