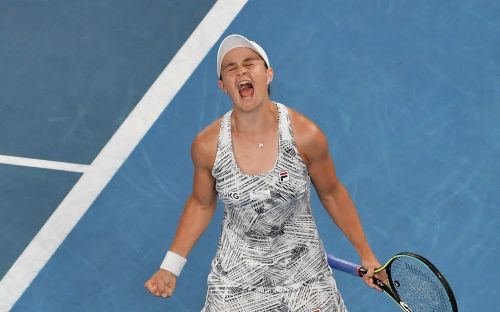 Melbourne: World number one Ashleigh Barty became the first Australian woman in the last 44 years to win the Grand Slam on their soil on Saturday by defeating Danielle Collins 6-3, 7-6 (7-2) in the women's singles final in a game of absolute beauty.

The world number one was 5-1 down in the second set but came storming back to win on a tiebreak and sweep past the 27th seed to be crowned Australian Open champion.

She is the first Australian woman to enter the final since Wendy Turnbull made the achievement in 1980 and to win it after Chris O'Neil in 1978.

The two-time Grand Slam champion - at the 2019 French Open and Wimbledon in 2021 - appears relaxed as she battled against a resilient Collins.

Collins was in "the zone" and almost flawless as she pummelled Polish seventh seed Iga Swiatek into submission in the semi-final. However, her lack of experience in the final proved an encumbrance than many have imagined. However, Collins stood toe to toe against the Australian star as she battled from one set to another.

Ashleigh Barty swings back into action, trades tennis for golf