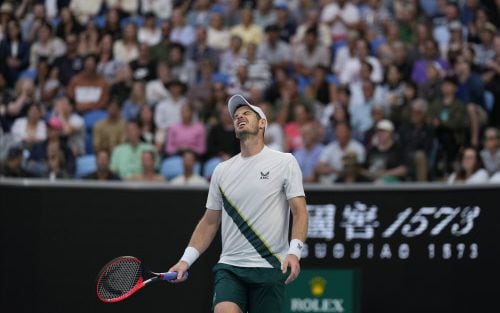 Melbourne: Andy Murray evened his Australian Open match at a set apiece and stood in a corner of Margaret Court Arena with his hands on his hips, staring up into the stands, where spectators were jumping and screaming, pumping their arms and waving blue-and-white Scottish flags.

All of those fans, and Murray himself, could have been excused in that moment for thinking, “Here we go again!”

Except there would be no five-set thriller this time for Murray and his many backers. No after-midnight finish. No classic comeback. And no victory. No, the wear-and-tear of Murray’s two previous unending, unyielding, performances simply took too much out of his 35-year-old body and metal hip, leaving him with more than a half-dozen blisters and an aching lower back during a 6-1, 6-7 (7), 6-3, 6-4 loss to Roberto Bautista Agut in the third round Saturday night.

“You can’t always control the outcome. You can’t control how well you’re going to play or the result. You can control the effort that you put into it, and I gave everything that I had the last three matches. I’m very proud of that,” said Murray, a five-time finalist at Melbourne Park and the owner of three Grand Slam titles from elsewhere. “But, yeah, I’m also disappointed.”

This match ended a minute shy of 3 1/2 hours, which seemed rather short and sweet when compared to Murray’s exhausting trek that took more than 10 1/2 hours earlier in the week: He beat 13th-seeded Matteo Berrettini in a five-setter in the first round on Tuesday, then eliminated Thanasi Kokkinakis in another five-setter in the second round that began on Thursday night and concluded a little after 4 a.m. on Friday.

Murray then slept from 6 a.m. to 9 a.m., showed up at the tournament site to get his blisters drained, and returned to his hotel for a nap, before getting on court to hit for just 15 minutes or so.

He got off to a slow start against Bautista Agut on Saturday, made a strong push to grab the second set, and faded down the stretch. When the match was over, Murray was given quite a send-off.

“Today (there) was a lot of love for Andy,” the 24th-seeded Bautista Agut said afterward. “I think maybe next round, a little bit more for me.”

These two had played six times previously, including Bautista Agut’s win at the Australian Open in 2019, a year after Murray had his first of two hip operations — and days after he tearfully acknowledged he thought he was on the verge of retirement.

After that loss to Bautista Agut, a video tribute to Murray was played in the stadium, and he himself uttered the words, “If today was my last match ...”

Not much later came Murray’s second procedure, this one to fit him with an artificial hip, and he eventually returned to the tour.

In the time since, he has wondered aloud whether the work it takes to be competitive now is worth it. After Saturday’s loss, he was asked how moments such as those this week make him feel.

“I would like to go out playing tennis like this, where I’m competing with the best players in the world in the biggest events and doing myself justice. There were maybe times, the last year or so, where I didn’t really feel like I was playing well, and I didn’t enjoy the way that I was playing,” said Murray, whose exit Saturday leaves Novak Djokovic as the lone major champion still in the men's field.

At this Australian Open, though, he explained: “It’s more enjoyable for me when I’m playing like that, when I’m coming into a major event and really believing that I can do some damage.” AP