Mayweather slammed McGregor's decision to end his career but warned him that if he ever decides to return, he will be waiting to 'punish him' again.

Las Vegas: Professional boxer Floyd Mayweather has taken a dig at UFC fighter Conor McGregor who announced his shock retirement from the sport on Sunday.

Mayweather slammed McGregor's decision to end his career but warned him that if he ever decides to return, he will be waiting to 'punish him' again. The American had defeated McGregor in the 10th round of a boxing match in 2017.

McGregor uploaded a photo of a cake on his Instagram account and it had a message engraved which read: "Happy retirement daddy".

On this photo, Mayweather replied: "If I'm not mistaken, didn't you tell Mike Tyson you could beat me if we fought a second time? Now you're quitting! I thought you wanted to beat the best? Well, if you decide to come back, I will be waiting to punish you again." 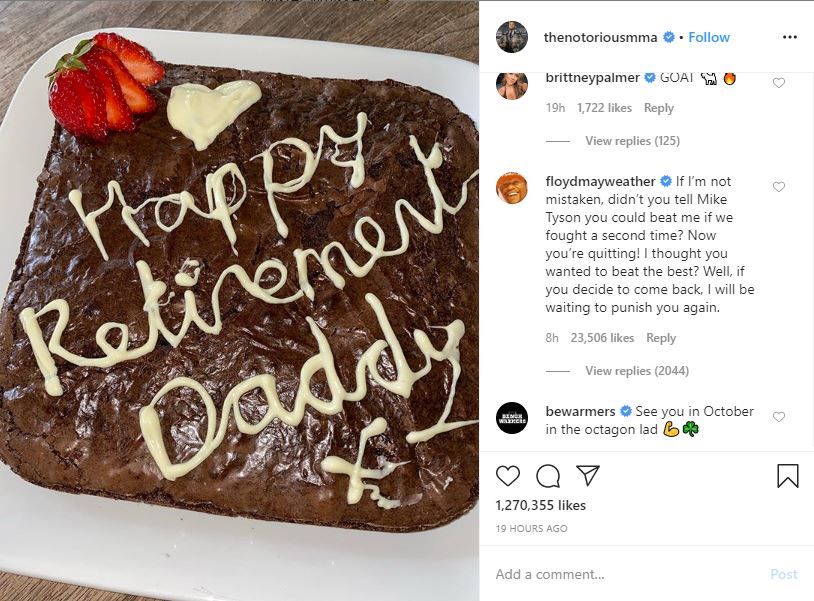 This is not the first time McGregor has decided to quit fighting as he had earlier tweeted twice about retirement, both times when he was involved in arguments with the UFC. His last fight came in January against Donald 'Cowboy' Cerrone which he won and he has since expressed interest to face a number of opponents.

He was tied this summer to face current top lightweight contender Justin Gaethje. A trilogy fight with Nate Diaz was also something he expressed interest in repeatedly and had also tweeted on May 28 that he had accepted a proposal for a fight against MMA legend Anderson Silva.