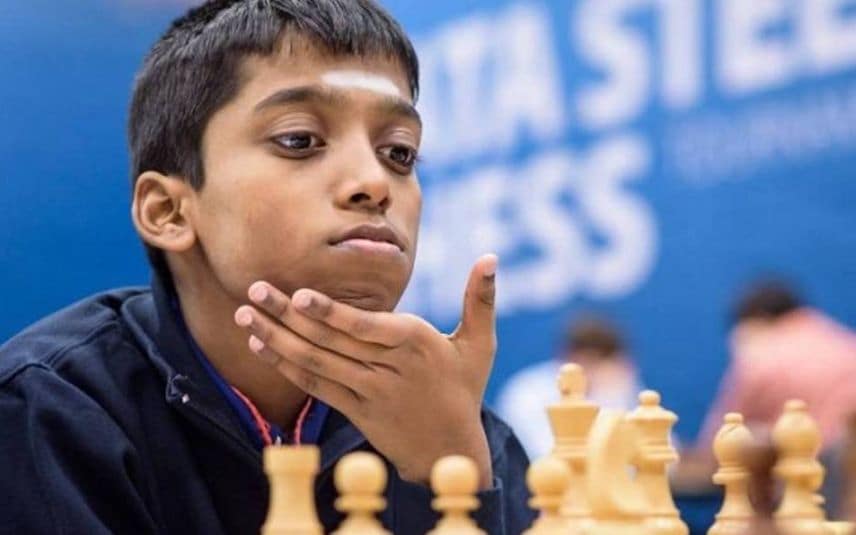 On Monday, Praggnanandhaa took the chess world by storm, defeating Carlsen in the FTX Crypto Cup, the second major on the Champions Chess Tour to finish runner-up in the strong tournament.

It is a sort of an ascetic's life that the young Grandmaster Praggnanandhaa and his elder sister Woman GM (WGM) R. Vaishali lead, "talking and breathing chess while avoiding other diversions", their mother R. Nagalakshmi told IANS.

This month has been memorable for the 12th standard student. For, early this month, his team -- India-2 -- won the bronze medal at the 44th Chess Olympiad in Mamallapuram, and Praggnanandhaa also won the bronze for his individual performance.

On August 10, he celebrated his birthday and followed it up with victories over Carlsen and finishing runner-up in the FTX Crypto Cup.

"He will participate in the Dubai Open now and then return home," Nagalakshmi said.

Sporting the sacred ash on his forehead, Praggnanandhaa makes his first move after praying to the Almighty.

"He does not have any favourite Hindu deity. He prays before making the first move," Nagalakshmi said.

Practicing chess for about five-six hours, attending online chess classes, Praggnanandhaa and Vaishali are not interested in films or television shows.

"Praggnanandhaa and Vaishali watch television only when they are having meals. They do not have anything like favourite dishes or movie actors. They like homemade food and do not order pizzas, noodles online as they are very particular about eating healthy food," Nagalakshmi said.

At home, the siblings play chess and also "discuss and dissect" other games.

Praggnanandhaa, ranked eighth in the world among juniors with an ELO rating of 2,661 points, also plays table tennis, badminton and watches only nail-biting cricket match highlights.

The chess prodigy's tryst with chess began when Vaishali was enrolled in a chess coaching school. On seeing her play, Praggnanandhaa too got hooked to the 64-sqaure board game.

"Praggnanandhaa's style can be described as universal -- neither aggressive nor defensive. But he makes the right moves at the right time," GM R.B. Ramesh, who coaches the chess prodigy, said.

According to Ramesh, one of the striking features about Praggnanandhaa is that he is not emotional and takes things as they come.

"He might have won against Carlsen yesterday (Monday). But his focus now will be on performing well at the Dubai Open. He is a level-headed person; fame and all the focus does not get to his head," Nagalakshmi said.

According to her, the Velammal Matriculation Higher Secondary School encourages the chess players very well.

"They have to write only the annual exam. We arranged home tuition for a couple of subjects like math and accountancy," Nagalakshmi added.

While the siblings decimate opponents, their parents juggle their work schedule to accompany their wards on domestic and international trips.

"I accompany them a lot. The problem arises when they are playing in different countries at the same time. We have had to skip several social functions," Nagalakshmi remarked. IANS

New Delhi: In a significant boost for the ...