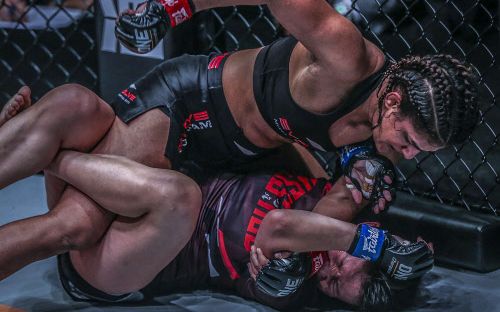 Ritu Phogat in action during the ONE Championship I PTI

New Delhi: India's Ritu Phogat, who is currently ranked 4 in ONE Championship's atomweight division, opened up about her love for combat sports from a very young age.

Ritu, the third daughter of former wrestler Mahavir Singh Phogat, began training under her father when she was eight years old.

"I was born in a sports family so my love for sports and especially combat sports had developed since a very young age. This has been my way of life and I have known and loved nothing but combat sports. Ever since I was a child, I have seen my fathers and sisters put their heart and soul into combat sports like wrestling. So it was natural for me to take up combat sports and carve out a niche for myself in this field," said Phogat.

That niche delivered plenty of success for the young grappler. In 2016, she went on to win gold at the 2016 Commonwealth Wrestling Championship. Wrestling which is one of the very toughest sports in the world not only takes exceptional stamina, but unwavering discipline and resilience. Starting the sport young nurtured key characteristics in Phogat that helped drive her towards success.

"Over the years of training, I have seen myself become stronger, better, fitter, and faster. These improvements fill me with a sense of accomplishment and certify the fact that nothing is impossible, as long as you put in dedicated efforts towards achieving your goals. The positive impacts these sports have created in my life are great confidence boosters," continued Phogat.

In 2019, she turned to Mixed Martial Arts, where her exceptional work ethic and relentless style garnered a 9-2 record, and place in the final of the ONE Women's Atomweight World Grand Prix. This, all in the space of just a few years. Martial Arts have taught the Evolve MMA star a lot.

Throughout her MMA journey, Phogat shared what she has learned. She said: "To do better, a disciplined life is a must. Combat Sports require regular and rigorous training. You need to watch what you eat and take care of your mental health as well. A routine lifestyle helps me stay disciplined and focused."

"Our life is nothing but a series of ups and downs. I have won and lost. However, the world of Combat Sports taught me to accept my downfalls, learn from them, and rise back stronger," the 27-year-old said.

"It is critical to stay active. Often laziness pushes people off track and paves the way for procrastination. Combat Sports removes lethargy from my life. Your mind can be powerful and destructive. Combat Sports taught me to concentrate on my goals. It helps me keep distractions away, plan my days better and emphasize those things that are truly important," explained the atomweight fighter.

Remarkably, Phogat competed five times in 2021. She's currently ranked 4 in ONE Championship's atomweight division and is preparing the make her comeback as she continues to follow her dream of becoming India's first female MMA world champion in a major organization. ANI