A 7/7 in the Chess Olympiad for any Grandmaster (GM) is not a small feat and if that was achieved by a 16-year-old GM, then it is even more commendable. 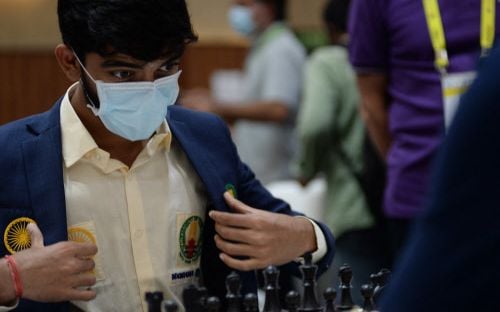 Chennai: A 7/7 in the Chess Olympiad for any Grandmaster (GM) is not a small feat and if that was achieved by a 16-year-old GM, then it is even more commendable.

The 16-year-old boy is GM D. Gukesh, one of the world's youngest to get the coveted GM title.

And yes! There is certainly a Rajinikanth, the Tamil movie hero known for many stupendous feats on the silver screen, in him.

Gukesh's father is D. Rajinikanth is an ear, nose and throat surgeon.

Playing on the top board of India-2 team, Gukesh has won all his seven games at the ongoing chess Olympiad and has scalped even GM Alexei Shirov.

"Gukesh is a calm boy. He is more of a positional player who calculates a lot and has a very high strategic sense," GM Vishnu Prasanna, the coach of India's latest chess sensation, had told IANS.

According to Rajinikanth, his son Gukesh breathes and eats chess and spends several hours before a computer reading and analysing games and also listens to spiritual music.

Well, the actor Rajinikanth had also said his political philosophy will be spiritual politics. It is a different matter that the actor backtracked from getting into Tamil Nadu politics.