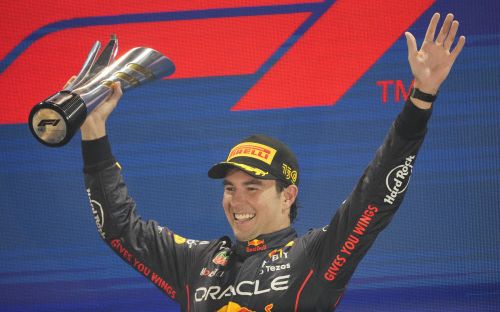 However, his win is currently uncertain as stewards are due to investigate a potential safety car infringement against the Red Bull driver after the race.

Leclerc had started on the pole but was almost immediately passed by Red Bull's Perez. Ferrari's Carlos Sainz grabbed the third position.

Lewis Hamilton and Max Verstappen both collided with barriers as they struggled with the stop-start nature of the race caused by the changing weather and several yellow flags.

Hamilton secured ninth, while Verstappen got the seventh position. Verstappen needed a win, and other results to go his way, to become world champion for the second successive time.

Lance Stroll and Sebastian Vettel capitalised on errors from Hamilton and Verstappen to finish sixth and eighth, respectively, in a massive result for Aston Martin.

Hamilton, who had previously gone straight on into the barriers on Lap 33, locked up in an attempt to pass Vettel in the final two minutes of the race and dropped to ninth. That gave Verstappen P8, despite the Dutchman having locked up heavily in the final Safety Car restart. The Red Bull driver then pried P7 off Vettel with a pass on the very last lap of the race.

Behind Hamilton, Pierre Gasly rounded out the top 10 for AlphaTauri with Valtteri Bottas (11th) unable to take the final point despite taking soft tyres for the final Safety Car restart.

Hamilton's Mercedes teammate George Russell also suffered from tyre issues himself through the race and ended up finishing 14th, last-placed out of the drivers that finished the race. IANS